How Bain Capital made us fat 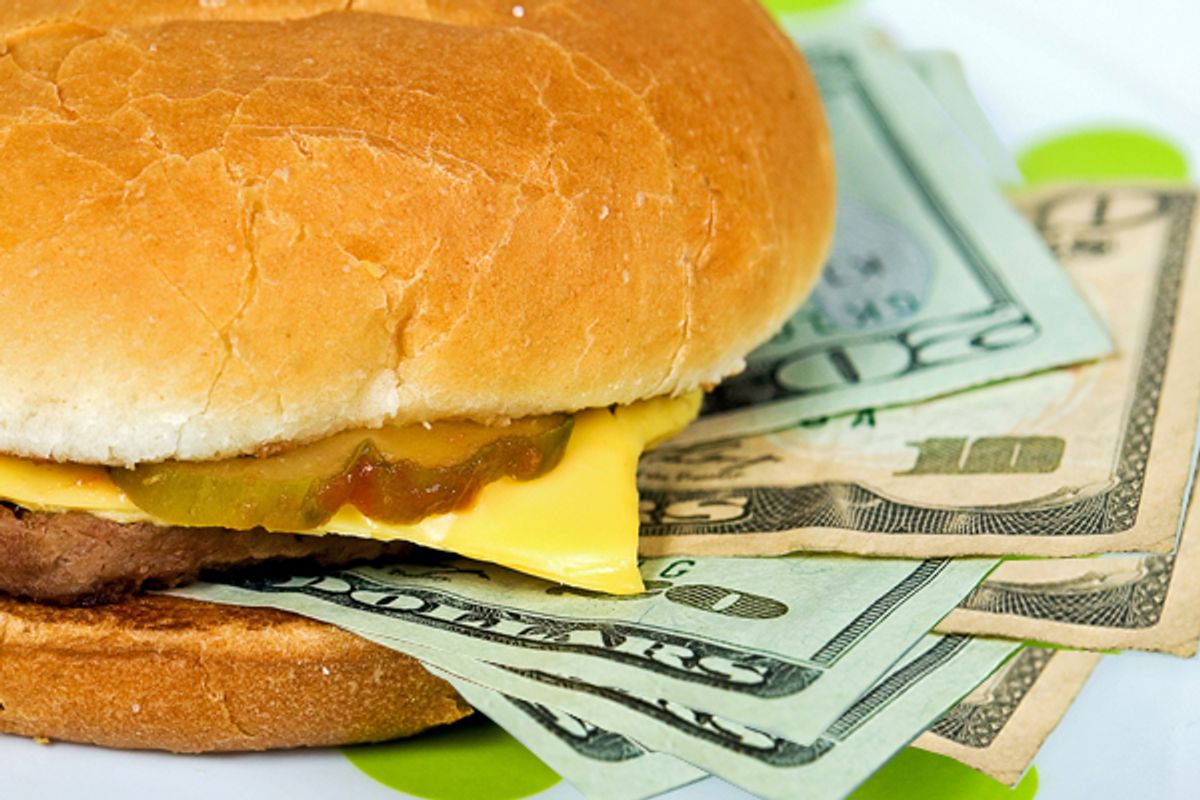 Burger King's Triple Whopper with cheese: 1,230 calories. Domino's Philly Cheese Steak Pizza: 2,140 calories. The Outback Steakhouse Bloomin' Onion: An incredible 2,210 calories. And to wash it all down: a Dunkin' Donuts Mocha Almond Iced Latte: only 290 calories. You can have two!

What do all four of these culinary delights have in common, besides the clear and present danger they pose to your waistline and arteries?

The answer is Bain Capital, the private equity firm founded by the presumptive Republican presidential nominee, Mitt Romney. As each of these fast food and restaurant chains has wended its torturous way from private to public ownership and back again, from leveraged buyout to merger to spinoff, Bain Capital has been intimately involved, orchestrating management changes, public offerings and, above all, huge profits.

Bain purchased Domino's from its founder, Tom Monaghan, in 1998, and was part of one consortium that bought a controlling stake in Burger King in 2002, another group that bought Dunkin' Donuts in 2005, and a third that purchased Bloomin' Brands, Outback Steakhouse's corporate parent, in 2006. But Bain Capital is far from the only investor group to crave junk food. The private equity industry in general adores multi-franchised purveyors of low-priced calorie bombs, here in the U.S. and all across the globe.

Bain Capital's record as a pioneer in private equity wheeling and dealing, however, along with its special status as the launching pad for Mitt Romney, demands that the company gets special attention. An obese, wheezing, diabetic nation wants to know: Can we blame Bain Capital for making us fat?

There are many structural reasons why free-market capitalism as practiced in a democracy dominated by special interests has resulted in the creation of a fast-food paradise. Government subsidies that promote everything from the build-out of highways to the farming of corn helped paved the way to a junk-food utopia at every clover-leaf intersection. Political resistance to higher minimum wage laws and health and safety inspections also keeps operating costs cheap. But there is a special synergy between the private equity profit model and fast food chains that keeps the whole system going like a Frankenstein monster that can't be stopped.

The basic private equity play works like this: Bain Capital, or the Carlyle Group, or whoever, borrows a ton of cash and buys a stake in a company that, for whatever reason, isn't performing very well, or is somehow undervalued by public markets. But the problem with using debt to make a purchase is that you are then immediately saddled with the irritating obligation to regularly come up with significant sums of cash just to cover your debt payments. Fast food chains -- or any chain made up of thousands and thousands of franchises -- are attractive because even in bad times they are generating plenty of cash. Access to that cash is the key to successfully orchestrating a leveraged buyout. Bain borrows a few billion dollars, swoops in on the vulnerable target, makes whatever changes it deems necessary to spruce up the company -- selling assets, laying off workers, introducing the Triple Whopper -- while covering its debt payments with the cash generated by daily operations.

The result: It's very difficult for fast-food chains to die, no matter how badly they are run. If they start to sputter, they automatically become an attractive buyout target for someone with access to the capital necessary to do an overhaul. The process can be repeated ad infinitum, as the saga of Burger King, which is now gearing up for its second IPO in the last decade, amply illustrates. Like the McDonald's burger that's supposedly incapable of rotting, once a fast-food chain reaches a big enough size, it's well-nigh immortal: There's always going to be someone who sees potential value in the undying corpse.

The same is not true, it should go without saying, for your typical struggling mom-and-pop diner or locally sourced, all-organic fine dining eatery. If they can't generate the cash to pay the bills, they are done, and the private equity moguls will not be interested in coming to the rescue.

Bain's various investments in fast food do not all fit in exactly the same box. When Mitt Romney personally signed the check to buy Domino's in 1998, the pizza company wasn't in trouble. But if you want proof that quality does not coincide with profits, Domino's example is instructive. The deal worked out fantastically for Bain. According to the Boston Globe, Bain extracted cash from Domino's "in several chunks including: a 2003 refinancing of the company’s debt, a 2004 initial public stock offering, and an $897 million 'monster dividend' paid to Bain and other investors in 2007."

But by the time Bain got out of Domino's in 2010, Domino's pizza was regularly placing last in taste tests when compared to its major competitors. That Philly Cheese Steak Pizza (introduced in 2003) just wasn't doing the trick.

Burger King's recent corporate history, however, offers the most delicious (if fattening) example of how a big fast food chain cannot sink, no matter how many icebergs it hits. In 2002, a coalition of Bain Capital, Goldman Sachs and TPG Capital purchased Burger King from the huge liquor conglomerate Diageo for about $1.5 billion. New management closed around 1,200 ailing franchises, and according to one study, revitalized sales by reducing customer wait time and staff turnover. Management also cooked up a plan to target the so-called super-fan -- young men who could be counted on to load up at their neighborhood Burger King multiple times a week. Thus, the Triple Whopper and the Enormous Omelet Sandwich (730 calories).

In 2006, the investors exited successfully with a Burger King IPO. But then came the recession, which hit Burger King harder than its primary rivals, McDonald's and Wendy's. Even super-fans, apparently, have their limits when they are unemployed. But not to worry: In 2010, a group of Brazilian billionaires, 3G Capital, paid $4 billion to take Burger King private again. And now plans are afoot for another IPO. Maybe this time, the new Burger King Bacon Sundae will prove to be the draw that keeps customers coming.

The physical universe may frown upon perpetual motion schemes, but fast food chains appear to have found a way to scoff at entropy and death. In 2011 alone, private equity investors with around $500 billion to spend kept merger and acquisition activity in the restaurant industry hopping.

There are some signs that, spurred by customer demand and the pressure exerted by the up-and-coming "fast casual" restaurant sector, the big chains are beginning to move toward healthier menus. Dunkin' Donuts, for example, announced it was dumping trans fats as early as 2007. But the bigger a chain is, and the tougher the competition, the more it will always be forced to scrimp on ingredient quality to keep prices low, and the more important it will be to keep pushing the addictively fattening bottom-line profit-makers: the fries and the shakes and the triple-cheese layered pizzas. We are a nation in love with our Bloomin' Onions. The crazy thing is, the nature of the private equity beast is that even when the fast food dinosaurs are begging for extinction, they'll always be offered a second chance.

Can we blame Mitt Romney's Bain Capital for perpetuating this state of affairs? It might not be totally fair, but there's at least a little bit of truth to it. Providing the capital necessary to keep Burger King and Domino's and Dunkin' Donuts going strong has added more than a few pounds to the collective scales. But if we're going to assign blame, then perhaps we should also give some credit. Mitt Romney, after all, is the first politician in the United States to deliver universal care to his constituents. So even as Bain fattens 'em up, Mitt made sure they can get coverage for whatever ill health ultimately ensues.