From gun deregulation to education cuts, the laws enacted under the GOP governor will haunt Florida for years 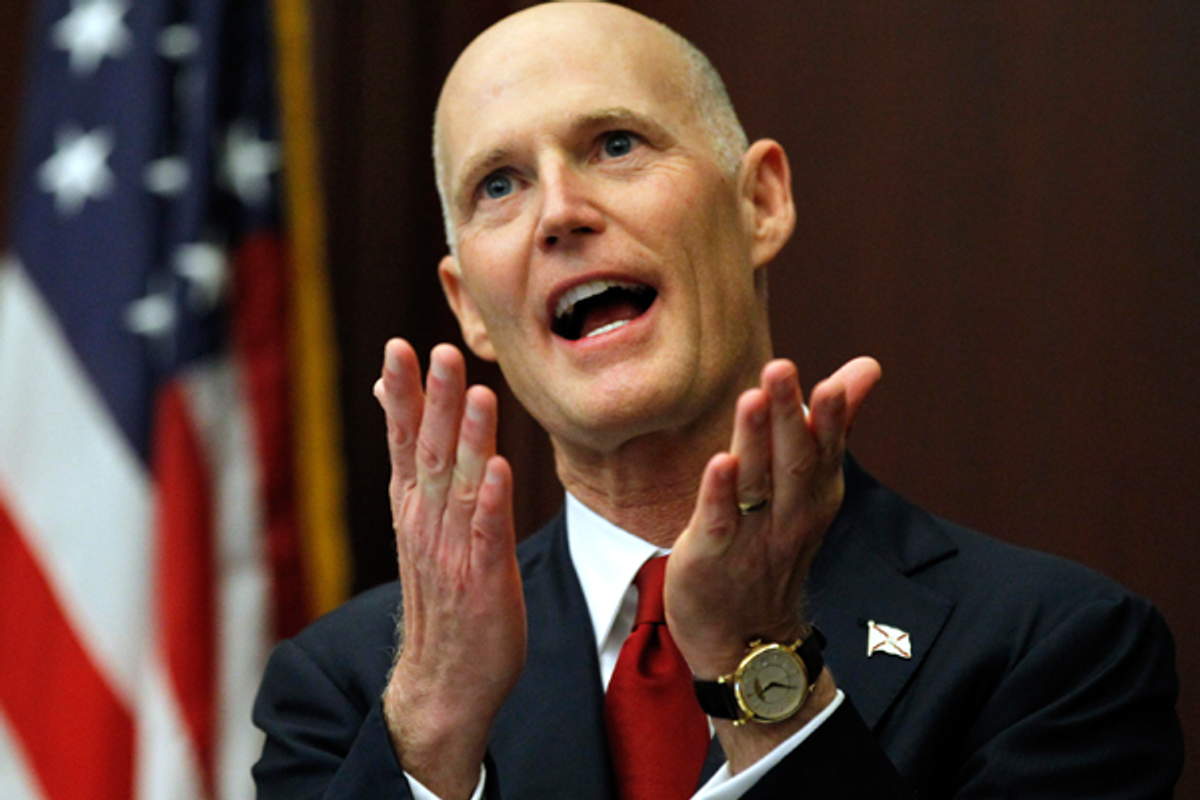 While millions of residents and visitors are working on their tans, shady politics are prospering in the Sunshine State. What residents are now learning is that the negative impact of the work of the Republican-dominated Legislature and Republican Gov. Rick Scott will haunt them for years to come.

Most of the new measures were approved over the past 12 months, but as we are all learning, seven-year-old legislation is causing excessive pain, heartbreak and anger in 2012.

Florida’s so-called “Stand Your Ground” statute was passed in 2005 with bipartisan support. The measure, signed by then-Gov. Jeb Bush, was pushed by gun rights activists and makes it clear people can use deadly force when they fear their lives are in imminent peril of death or great bodily harm, even if they are not at home. Supporters of the law say it has reduced criminal activity, although it could stand some changes. Opponents want the law thrown out entirely. And Jeb Bush now says the law does not apply in the shooting death of Trayvon Martin on Feb. 26 in Sanford.

“Stand your ground doesn’t mean chase after somebody who’s turned their back,” Bush said at a University of Texas at Arlington forum a month after the incident. The 17-year-old Martin was killed by a neighborhood watch volunteer during a scuffle. Despite calls for justice from Martin’s family and nationwide protests over the shooting, local police and prosecutors cited “Stand Your Ground” in initially deciding not to charge volunteer George Zimmerman. A state investigator has ruled Zimmerman can’t be charged with first-degree murder.

On Wednesday, however, a special state prosecutor announced that Zimmerman would be charged with second-degree murder and was in police custody. The state's prosecutor said police investigators needed to take the time necessary to establish probable cause and decried the publicity surrounding it, saying it could prevent selecting an unbiased jury. However, without the national outcry, it is questionable whether any charges would have been forthcoming.

And Florida has buckled under more recent pressure from the National Rifle Association. An editorial in the Tampa Bay Times says “Florida leads the pack in passing bills written by the gun lobby that block any sensible attempt to control the purchase and use of firearms.” Weapons opponents say Florida is now the “Gunshine State.”

Right-wing Republicans approved a bill in October 2011 that declared that the Legislature “is occupying the whole field of regulation of firearms and ammunition ... to the exclusion of all existing and future county, city, town or municipal ordinances.” Anti-gun forces and local officials were outraged. One effect of the law is that Tampa city officials cannot ban handguns near the site of this summer’s Republican National Convention. If the city council did so, it would face a state fine of $100,000 for interfering with the statute. So while the city council is banning hatchets, knives, pepper spray, chains and water guns during the GOP gathering, anybody can carry a gun near the convention unimpeded.

Another provision of the law is truly frightening. It makes it easier for anyone to bring a concealed weapon into the state government complex in Tallahassee. No longer can police ask people to check their weapons before entering the state capitol itself. Adding insult to injury, many lawmakers spent taxpayer money to install emergency alert buttons on their phones, just in case someone starts shooting. But as one Democratic senator notes, panic buttons won’t be much good if someone charges into a government office with guns blazing. The Florida Department of Law Enforcement says violent crime has fallen statewide, but gun-related deaths increased 35 percent from 1999 to 2009. And here’s something that really worries gun opponents: In a state with 19 million residents, there are 6 million gun owners, almost a million of whom can now carry concealed weapons.

A year ago, Republicans crammed another right-wing manifesto down the throats of Floridians. HB 1355 was called an omnibus elections bill. Those against the measure call it a rollback of voting rights that will hit minorities and others especially hard and could impact 2012 election outcomes. They say many of the state’s 11 million registered voters won’t get to cast ballots in future elections. “It undercuts democracy,” says Denise Velazquez of the group State Voices Florida 501C3 Civic Engagement Table.

She finds one part of the law “most offensive.” It places severe restrictions on third-party groups registering new voters and says it’s likely to have an overwhelmingly negative effect on blacks and Hispanics across the state. Velazquez calls the law a “silent understanding to disenfranchise voters.” Another provision aimed at restricting voters’ freedoms compresses the time for early voting to just eight days.

But in acting to reduce voting rights, the Republicans didn’t just penalize minorities. In March 2011, Gov. Scott scaled back the right to vote for thousands of people with criminal records. In many cases, they have to wait up to five years before being allowed to reregister to cast ballots. A state with a lengthy and hateful record of voter discrimination seems to be carrying on that nasty tradition even today.

The Republican establishment in Tallahassee continues to cut the state’s commitment to education. “Rick Scott and the legislature don’t care about education,” says Susan Smith, president of the Democratic Progressive Caucus of Florida. In 2011, Scott and his cronies removed $1.3 billion in funding for kindergarten through grade 12, resulting in hundreds of teacher layoffs.

“Just horrific,” is how Mario Piscatella of the group MPA Political describes the cuts. “They’re undermining our education system." And Piscatella criticizes another Republican initiative. Rather than funding colleges adequately, he says the state voted to build a 14th state university, which seems to him an utter waste of tax dollars. “Scott talks about bringing in new jobs and companies to Florida, but that won’t happen with poorly educated kids,” Piscatella adds.

Others note the budget cut for education was so steep that the governor’s popularity plummeted. So in the 2012 state budget, Scott added $1 billion for schools. He’s been touring the Sunshine State, telling students how the new money will help them learn and find good jobs. Many call it sheer hypocrisy intended to get voters to support Republicans running for reelection to the legislature this fall. Scott does not run again until 2014.

Earlier this year, the state legislature approved a measure Scott and his Republican cohorts call motor vehicle insurance reform. Supporters say it’s meant to stop fraud by unscrupulous drivers. Opponents label it anti-consumer, pro-industry legislation. The measure is so controversial that eight Republican senators voted against it, although it managed to squeak through the upper chamber by one vote. The new law is set to take effect on Jan. 1, 2013. It deals with PIP insurance, personal injury protection.

PIP is mandatory for all Florida drivers. It covers medical bills and lost wages resulting from motor vehicle accidents. Florida is a no-fault state, so benefits are paid by drivers’ insurance firms, regardless of who is at fault in an accident. At present, PIP pays 80 percent of medical bills and 60 percent of lost wages, up to $10,000 after a deductible. Republican state Sen. Ellyn Bogdanoff is one sponsor of the new measure. “We see scams in many forms, including staged car wrecks or bogus medical claims,” she says. “Floridians should not be forced to pay higher premiums due to these unscrupulous individuals taking advantage of no-fault auto coverage.”

But others see it as purely pro-business. “The new law is very arbitrary,” says Miami-based attorney Jeffrey Gale. He says it forces accident victims to seek medical attention within 14 days. If they don’t, Gale says PIP won’t pay. And he notes that, unless the victim gets emergency medical treatment, PIP payments are reduced to $2,500. “It’s taking the decision on a person’s need for medical care out of the hands of a doctor and putting it in the hands of insurance companies,” Gale adds.

The bill was a pet project of Scott, who, before becoming chief executive of the state, was the chief executive of a large group of hospitals across Florida. Republicans predict that insurance rates will go down over time. But the new law does not force companies to reduce insurance premiums for Florida consumers. Some doubt premiums will come down, and they predict the companies will just make more money.

“Profits over people,” concludes attorney Jeffrey Gale. The Miami lawyer says the new law may actually bring him higher fees in some medical lawsuits, but he still opposes it, because it is anti-resident and pro-business. And he says the new PIP plan is still not the best way to deal with accident insurance. What Florida needs to do, he says, “is to abolish PIP and institute mandatory bodily injury coverage.”

The Sunshine State is one of the few that does not have it, he said, “and it’s just ripe for abuse.” Gale is quick to hurl epithets at the governor and his legislative cohorts. “These changes do not come about by chance but are the result of real decisions by real people, and the real people making these decisions favor big business over people,” he said.

The Republican right-wing express was less successful in one area, but the legislature tried very hard to reduce the rights of women. A handful of bills was introduced in the 2012 session that Democrats, and even some Republicans, found so offensive they prevented the measures from being voted on.

The “Florida for Life” Act would have banned all abortions, no exceptions permitted. It stalled in committee. The “Fetal Personhood” bill was also tabled. But one measure was approved by the House and was ultimately blocked by a bipartisan group of Florida senators. SB 290, also known as the Trap bill, was described by critics as an “omnibus antichoice” measure. It would have placed tough restrictions on abortion clinics and providers. It would have mandated that abortion clinics be owned and operated by physicians only. It created a 24-hour waiting period for women seeking the procedure, and it outlawed third-trimester abortions, except if the procedure were necessary to prevent the death of a pregnant woman or cause substantial and irreversible physical impairment.

There were other outrageous measures: a bill to gut growth management in the fast-growing state (passed in 2011); an effort to cut the minimum wage by 50 percent for workers who get tips (failed); a plan to steer public money to for-profit charter schools (approved); and legislation to adopt an Arizona-style anti-immigration policy (failed).

There’s every indication Gov. Scott and his right-wing allies will continue the assault on Floridians’ freedoms, assuming the Republicans win reelection this November and retain control of the legislature.

“They didn’t campaign on what they’re actually doing, and they don’t pass sensible legislation,” says Democratic Progressive Caucus president Susan Smith. “They said they would create jobs and improve conditions.” But Smith says they have not done that, and they’ve merely made things much worse. And the damage, in some cases, could last forever.