From LeBron James to Tim Tebow, sports stars are getting involved in politics again -- and that's a good thing 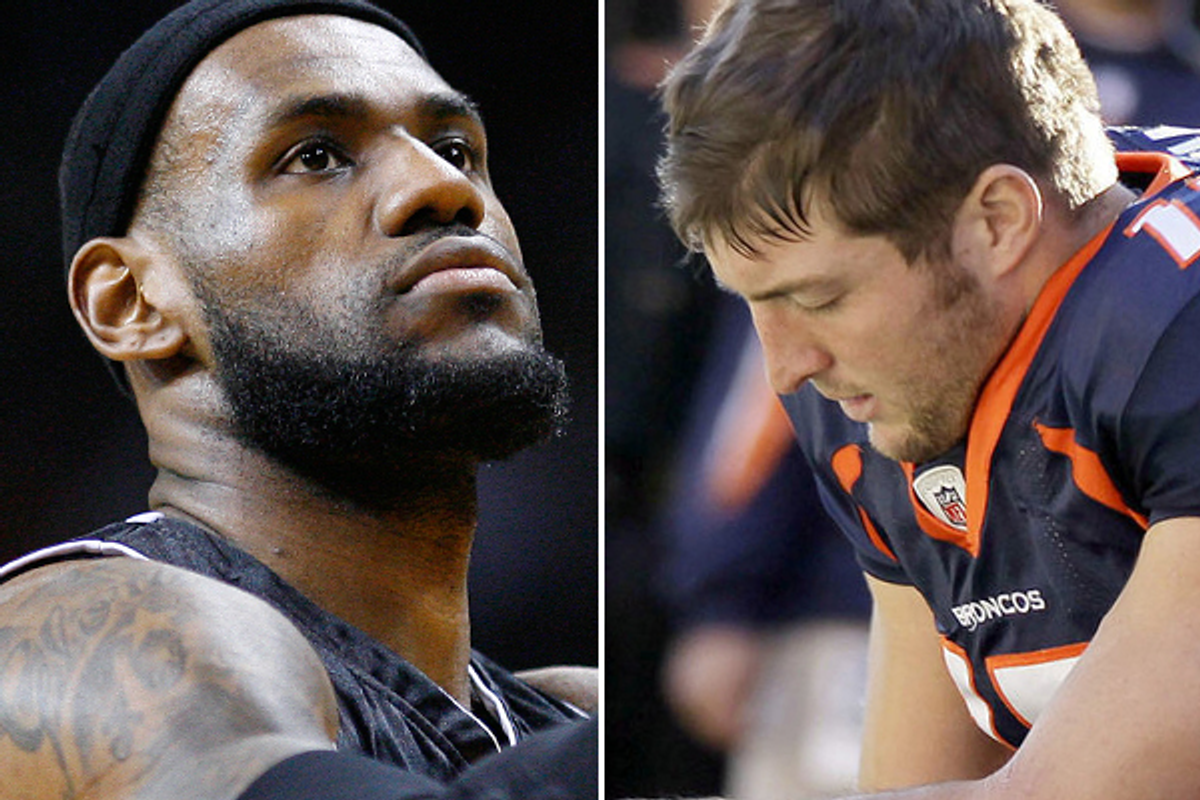 As high-profile events periodically prove, politics and athletics have long had a love-hate relationship, the affinity ebbing and flowing with the cultural tides. In the tumultuous 1960s, for instance, stars like Muhammed Ali, Arthur Ashe and John Carlos used their notoriety to embolden the major social movements of the time. Then came the 1980s and 1990s, which saw the sports world depoliticized in an age of “Just Do It” and “greed is good.” For every Charles Barkley using Nike commercials to forward social messages about role models, there were far more Michael Jordans who avoided any political statements whatsoever.

Skip forward to 2012 -- a superheated moment primed by seething protest campaigns and a divisive presidential election. Not surprisingly, the sports world has again shifted, becoming just as politically fraught as the society it entertains -- and whether or not you agree with a particular sports icon’s opinion, the larger change is a welcome development for participatory democracy.

In the last few years, we’ve seen sports activism at every locus on the ideological continuum. On the right, football phenom Tim Tebow starred in an antiabortion Super Bowl ad. In the transpartisan middle, Boston Bruins goaltender Tim Thomas refused to attend the White House’s Stanley Cup ceremony because he said he “believe(s) the Federal government has grown out of control.” And on the left, Major League Baseball teams have led public campaigns against anti-gay bullying.

No matter the issue, sports is now involved. The NFL players association has proudly supported public workers’ high-profile fights. Miami Marlins manager Ozzie Guillen (clumsily) highlighted the hypocrisy of an American government that at once embraces various dictators but shuns Cuba’s autocratic regime. And, of course, LeBron James organized Miami Heat players into a hoodie-themed photo in solidarity with those demanding an investigation into the shooting of Trayvon Martin.

James' move best highlights the veering undercurrents. As the Bleacher Report’s Ryne Hodkowski noted, the NBA star for years mimicked Jordan and other 1990s-molded “corporate athletes who don’t say anything political in fear of losing a big-time contract.”

Now, though, even carefully managed figures like James are weighing in on national controversies. Such moves exemplify both personal courage and, as important, an America that has suddenly become politically engaged. Indeed, fans now expect their sports deities to embrace that new normal -- and, as James shows, those deities are increasingly responding to the call.

On the surface, the jeremiad may seem perfectly reasonable -- but its deeper suppositions are abhorrently elitist and anti-democratic. They assume that only certain kinds of establishment-vetted individuals -- specifically, professional political operatives, politicians, pundits and reporters -- have standing to promote political causes.

That sentiment should be offensive not just to athletes, but to anyone not of the professional political class. Because, really, if a baseball manager or a basketball player somehow has no right to speak out, why should a plumber or a factory worker have that right?

In a political culture constantly paying homage to the working-class creed, few would -- or should -- say that such blue-collar laborers must simply “shut up and work.” It should be the same standard for athletes. The more these public figures exercise their right to speak out on major issues, the more they help teach younger generations that politics is not a game only for Washington, D.C., elites, nor a punch line only to laugh at during "The Daily Show" -- but a critical battle of ideas that requires everyone’s participation.