When Democrats gave up on guns 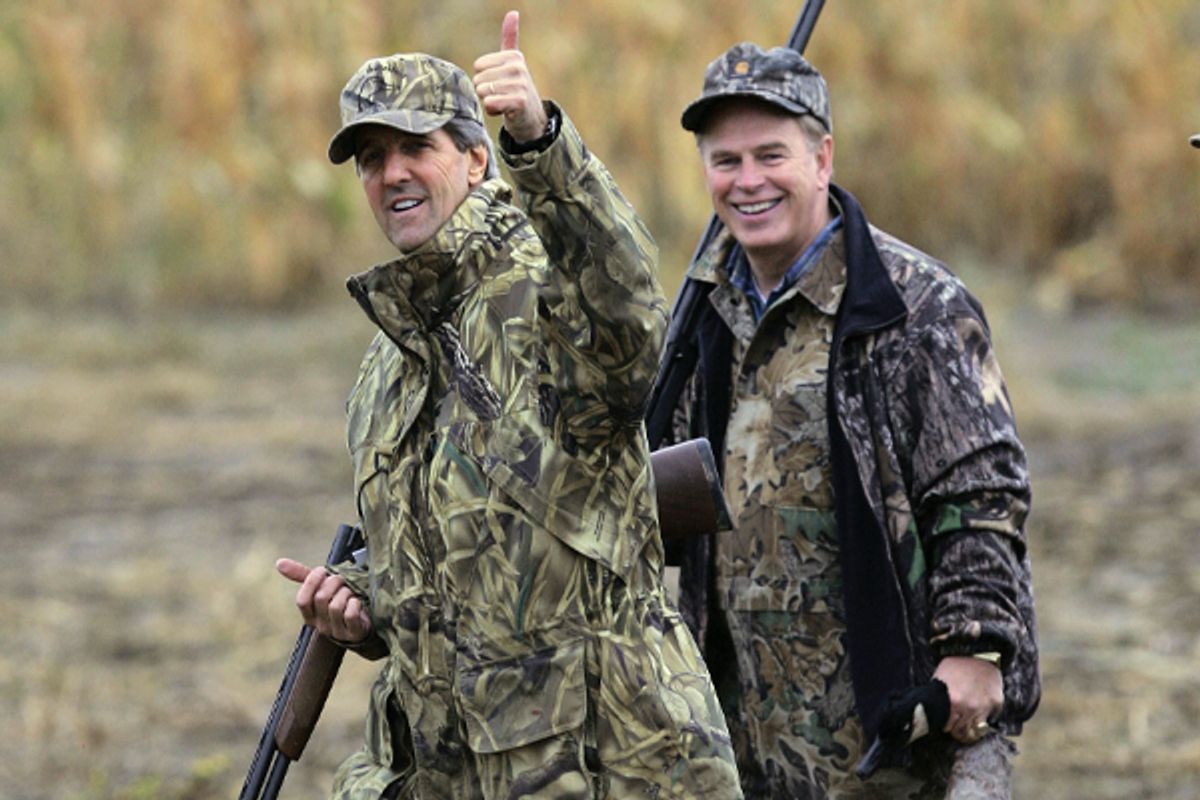 The psychology of the National Rifle Association can be funny.

You might think the gun rights group would be deeply suspicious of Mitt Romney, who signed a ban on assault weapons and small handguns as governor of Massachusetts and assured voters there that “I don’t line up with the NRA.” And you might think its members would have at least grudging appreciation for Barack Obama’s presidential record, which includes signing a law to allow loaded guns in national parks and which is devoid of any major push for gun ownership restrictions – even as two gun-related tragedies captured national attention.

But no, it’s Romney who's getting the warm welcome at the NRA's St. Louis convention this afternoon, and it’s the prospect of a second Obama term that has the group in a panic.  The president’s passive record on guns, according to Wayne LaPierre, the NRA’s executive vice president, is just “a massive Obama conspiracy to deceive voters and hide his true intentions to destroy the Second Amendment during his second term.”

Certainly, this reflects the pattern that has defined much of the conservative opposition to Obama’s presidency. He’s governed as a middle-of-the-road incrementalist, but the right decided before he took office that Obama was a leftist radical, so that’s how they’ll treat him. He could get reelected and sit on this hands for four more years and Obama will still be a gun confiscator to the 2nd Amendment crowd.

This does raise a question for Obama: If the NRA is going to pretend that you’re aggressively pursuing gun control anyway, then why not actually do it?

It’s probably worth remembering how this situation came about. In the 1980s and ‘90s, Democrats proudly trumpeted their support for gun control. Crime rates were much higher, so the issues polled well, and when Bill Clinton became president in 1993 he managed to push the long-stalled Brady bill, which mandated a five-day waiting period for the purchase of a handgun, through Congress and into law. A federal ban on assault weapons followed a year later, and while Democrats paid a real price with gun owners and rural voters in the 1994 midterms, Clinton had no trouble winning a second term in 1996.

The gun control turning point came in 2000, when Al Gore lost a number of states – West Virginia, Kentucky, Missouri, Ohio, Arkansas and even his native Tennessee – with substantial populations of rural and small-town lower-income white voters that Clinton had carried 1992 and ’96. At the same time, Gore improved on his party’s traditional performance in large metro areas with more affluent, culturally liberal voters, producing a virtual tie in the national popular vote and a national electoral map dominated by Republican red.

“Values,” it was decided, were at the heart of this shift, with lower-income whites buying into the Republican claim that Gore embodied a national Democratic Party hostile to their way of life. Disgust with Clinton’s second-term sex scandal and Gore’s own environmentalism were part of this, but the post-election consensus held that gun control had played a major role. If they were ever going to win back the lower-income whites they had lost, Democrats decided, they would have to change their approach to gun issues.

This doesn’t mean they abandoned the issue altogether. In states where it polls well, gun control is still a staple of statewide Democratic campaigns. But at the national level, the party has spent the last decade straining to convince gun owners that it’s not hostile to them. The effect has sometimes been cringe-worthy, as it was near the end of the 2004 campaign, when John Kerry sought to win over rural Ohioans with a stunt that was described memorably by the New York Times:

Clad in camouflage clothing, a 12-gauge double-barreled shotgun under his arm, Senator John Kerry and three fellow hunters emerged from an eastern Ohio cornfield Thursday morning with four dead geese and an image his aides hope will help shore up his macho bona fides among rural voters.

An aide said later that two of the birds would soon be sent back to Mr. Kerry for consumption.

The Kerry campaign bent over backward to avoid the perceived mistakes that Gore had made. ''This campaign is 180 degrees different from 2000,'' Kerry’s state director in West Virginia bragged before the election. But the result was the same. Actually, it was worse: Kerry lost West Virginia by 13 points, compared to only six for Gore in ’00. And Kerry failed to win back any of those crucial, gun-friendly states that Gore had lost to Bush. Nationally, Gore had lost gun owners to Bush by 25 points. Kerry lost them by 27.

Obama largely stuck to his party’s post-Gore script and deemphasized gun control in 2008 (although his “cling to guns and religion” remark surely didn’t help), but he ended up losing gun owners to John McCain by 28 points. And while Bush fatigue allowed Obama to improve on Gore’s and Kerry’s performances with working-class white voters, he ended up doing even worse in Appalachia than either of them had.

The case for national Democrats sticking with a hands-off approach to gun control is that it makes it possible to score victories in state-level races in pro-gun states. Think of Jon Tester winning a Montana Senate seat in 2006. But the party’s experience at the presidential level – and the hostility toward Obama that the NRA continues to exhibit – suggests that national Democrats may not be fooling anyone. For all their efforts, they’ve failed to win over gun owners for the last decade, and there’s no reason to think they’re about to. If Obama and the national party were to embrace gun control anew, would it really affect pro-gun Democrats like Tester? They’d be swimming against the same tide they’re already swimming against.