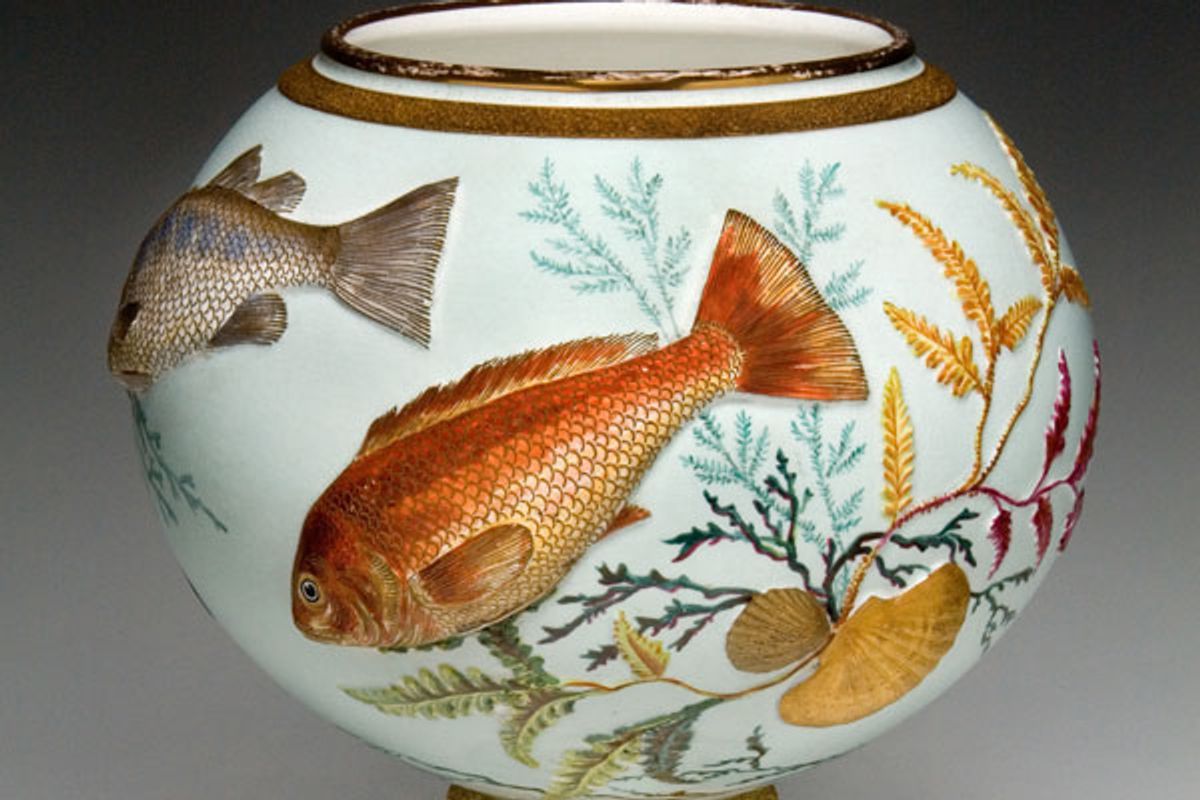 An unusually gifted artisan, Edward Lycett was at a natural advantage when he moved to Brooklyn from England in the 1860s. The ceramics he painted and produced over the course of his career found their way to luxury merchants, wealthy consumers — even the White House -- and his talents ultimately led him to a position as creative director of Greenpoint’s high-end Faience Manufacturing Co.

A number of Lycett's works will be exhibited in an upcoming show at New York City's Brooklyn Museum. Over email, curator Barbara Veith told me about the artist and his work, putting the vases and other ceramics he created into greater artistic and cultural context. Click through the accompanying slide show for a tour of the Faience Manufacturing Co.'s online showroom.

How did Edward Lycett get into the ceramics business? What is known about his personal history?

Edward Lycett was born in Staffordshire, the epicenter of English ceramic production, in 1833. As a 12-year-old, he apprenticed as a china decorator at Copeland and Garrett, the former Spode manufactory in Stoke-upon-Trent, and later moved to London to continue decorating work.

When Lycett arrived in New York City in 1861, he was one of hundreds of ambitious Englishmen from the Staffordshire potteries who came to the United States in search of greater opportunity.  He, his two children, and his second wife, Rachel (with whom he would have two American-born children), settled in Greenpoint, Brooklyn.

Lycett was a talented artist and skilled entrepreneur -- qualities that fueled his commercial success and distinguish his story from those of many other industrious immigrants. His career ultimately spanned six decades and encompassed a White House commission for the Andrew Johnson administration, teaching positions in St. Louis and Cincinnati, and recognition by Edwin Atlee Barber, the pre-eminent 19th-century American ceramic historian. Lycett reached his creative peak in the late 1880s, when he directed the aesthetic repertoire of Brooklyn’s Faience Manufacturing Co.

What is the history of the Faience Manufacturing Co.? Did it exist before Lycett became creative director? When and why did it shut down?

The Faience Manufacturing Company (FMCo.) was well established prior to Lycett’s arrival in 1884. It was common practice in the ceramic industry for potters to join forces with financial backers to start up a business. It’s likely that an enterprising potter approached Bernard Veit -- a partner in the prosperous millinery goods company Veit and Nelson -- to establish the Faience Manufacturing Co. in February 1881. On the business side, FMCo. was virtually a family affair: Veit appointed his son-in-law, Joseph Baruch, a former glove manufacturer, as secretary and treasurer; Veit’s brother and sons were among the directors. The firm produced ornamental pottery in their Brooklyn factory that was sold in Veit and Nelson’s showrooms in lower Manhattan.

Despite the great beauty of FMCo.’s wares, especially during Lycett’s tenure, the company’s sole focus on art pottery proved to be its downfall. Producing ornamental wares without a commercial line of goods to offset the expense forced them to cease pottery production in 1890 and reorganize as agents for a French porcelain manufacturer.

How typical -- or unusual -- was FMCo.’s work in terms of the Brooklyn craft trade in the 19th century? In terms of the wider American market?

During the last quarter of the 19th century, there were at least 12 potteries operating in Greenpoint. They produced a broad range of wares. Some manufactured coarse wares, including jugs, jars, crocks and flowerpots; others made fancy table wares as well as household articles such as doorknobs, drawer pulls, push plates and buttons for clothing. The Faience Manufacturing Co. was unusual in that it produced strictly artistic wares for display. FMCo.’s semi-porcelain vessels are of amazing scale, a characteristic that distinguishes them from the art porcelains produced at the time. The flamboyant vessels produced by FMCo. under Lycett’s supervision echo the expansive spirit of late 19th-century America.

How do the works on show change over the time period covered by the exhibition?

At first, FMCo. advertised that they would introduce new styles of artistic pottery weekly. In the competitive pottery industry, adaptability to changing taste was critical to viability. Objects on display from the pre-Lycett period of production range from French-inspired faience and Limoges wares with applied three-dimensional flowers or underglaze slip decoration, to an experimental vase with a Chinese-style red flambé glaze, and English-inspired, ivory-bodied wares painted with colorful flowers or birds and insects perched upon branches.

In 1884, FMCo. underwent a dramatic transformation that attests to their ambition to succeed at art pottery production. The firm expanded its Brooklyn pottery-making facilities, moved its Manhattan showrooms, and recruited Lycett, a renowned ceramic artist, as art director. Within two years of his arrival, Lycett had transformed FMCo.’s artistic agenda, creating bold and eclectic designs that continued to draw inspiration from fashionable English and European wares, as well as from venerated ancient, medieval, and Renaissance objects in major museum collections.

The firm used progressive production techniques, such as interchangeability of parts, that resulted in the creation of large-scale exotic shapes of Near and Far Eastern derivation that recombine a variety of elements. The vessels were embellished with exotic motifs in vivid enamels, with raised gold paste as well as jeweled and luster decorations that were also used interchangeably.

Who bought and displayed these works? How expensive were they?

In 1886, FMCo. made a big push to promote their stylish new wares in trade publications oriented towards jewelry and fancy goods wholesalers, as well as periodicals aimed at elite consumers. Positive press accelerated FMCo.’s success, and they soon sold at all the major retail establishments across the country.

Their opulent, large-scale ceramic objects were expensive to produce because fewer could be fired at once. Displayed on a mantel, or table, FMCo.’s vessels were prominent objects in a fashionable interior, the physical manifestation of their owner’s artistic and cultural sophistication. Try as I might, I have yet to locate a FMCo. vessel with provenance traceable to the original owner -- or a period image depicting a FMCo. vessel in situ. These are some of the missing puzzle pieces from the firm’s story that would be thrilling to unearth!

The firm’s only surviving trade catalog dates from the pre-Lycett period, and lists objects that range in price from 40 cents to $30.  In contrast, a much-lauded monumental FMCo. vase made during Lycett’s tenure was promoted in the New York press as being the most expensive piece of American pottery offered for sale, and it cost between $300 and $500.

What drew you to study Lycett and his work?

As a graduate student searching for a fruitful thesis topic, I was drawn to the atmospheric interiors and eclectic objects of the Aesthetic Movement. The synthesis of Near and Far Eastern designs, exemplified by the Faience Manufacturing Co.’s exotic wares, resonated with me. The Metropolitan Museum of Art’s 1986 exhibition catalog, “In Pursuit of Beauty: Americans and the Aesthetic Movement,” identified the Faience Manufacturing Co. and Edward Lycett as significant, but there was more to discover about the enterprising pottery and its eminent art director, and I embarked on a re-examination of Lycett’s multifaceted career.

Many times, I imagined entering the Faience Manufacturing Co.’s Manhattan showroom, or the decorating department of the Greenpoint pottery, and the exhilarating visual impact of seeing the myriad colorful and eccentrically shaped vessels displayed together. This exhibition is a realization of that dream. It also presents the exciting opportunity to incorporate new research facilitated by the Internet and digitization of numerous 19th-century primary sources.

"Aesthetic Ambitions: Edward Lycett and Brooklyn's Faience Manufacturing Company" will be on display at the Brooklyn Museum in Brooklyn, New York, from May 3, 2012, through June 16, 2013.