What doesn't kill you

When we escape death, we feel lucky and purposeful. Now science is explaining why 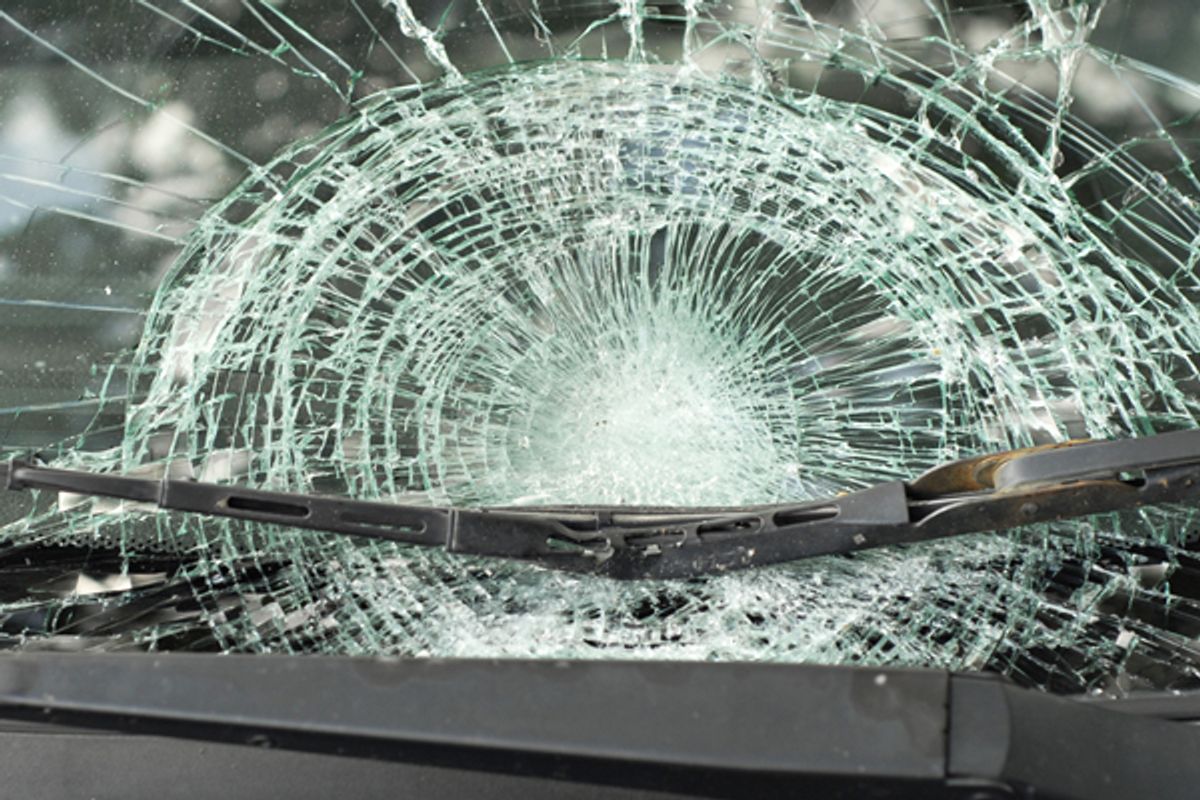 This article was adapted from the new book "The 7 Laws of Magical Thinking", from Hudson Street Press.

One morning in August 1944, a German Doodlebug exploded in London, disturbing a butterfly and causing it to flap its wings. No one seemed to notice the tiny breeze.

A year later, on the morning of August 9, 1945, the wings of Bockscar lifted it into the air. The B-29, loaded with a five-ton atomic bomb named “Fat Man,” took off from Tinian, an island 1,500 miles southeast of Japan. The United States had dropped “Little Boy” over Hiroshima on August 6, immediately killing tens of thousands of people, but Japan had not yet surrendered World War II. Around 9:30 a.m., the weather scout plane Up an’ Atom reported a few clouds but decent conditions over the next target. Clear for bombing.

Oh, but what’s that? The year-old turbulence of a butterfly halfway around the world? By the time Bockscar passed over its target at 10:44 a.m., the city was covered in haze. According to the pilot’s flight log, “Two additional runs were made, hoping that the target might be picked up after closer observation. However, at no time was the aiming point seen.” So the crew left the city of Kokura and made their way over to their second choice, Nagasaki.

Most people have never heard of Kokura. In this regard, it can be counted as one of the luckiest cities in the world.

We’re fascinated by near misses. In 1993, a German motorcyclist hit a truck, went flying into a tree, and was impaled on a branch. The headline in a Norwegian newspaper, next to a photograph of this unfortunate gentleman with a branch still going into his chest and out his back, read, “Verdens Heldigste,” or “World’s Luckiest.” Now, before you protest that perhaps I have made a spectacular error in translation, let me add the ending: the man survived. The branch had missed all his vital organs.

Luck is as tricky to define as it is to tame. As a first pass, you might calculate an outcome’s level of luck by multiplying its positivity by its improbability. Rare good things are lucky. But what about Kokura? Nothing positive happened to it. In fact, it lost thousands of neighboring countrymen. And the German motorcyclist had surely seen better days. “Luck” is often yoked to terrible, terrible things.

Karl Teigen, a psychologist at the University of Tromsø in Norway, has spent years studying what we mean when we talk about luck. One conclusion he’s reached is that, on par, “lucky” events are not pleasant. In a search of newspaper stories, for example, he found that “with the exception of an occasional sports champion and a double N lottery winner, the typical lucky person had survived a plane or car crash, had been stabbed or shot, fallen off a cliff or bridge, been shipwrecked, or surrounded by flames.” In a one-month period, he found one mention of “bad luck,” in a story about a soldier who had stepped on a mine — but the soldier had nevertheless commented on his own good fortune in losing just the one leg.

Teigen concluded that luck derives not from the absolute value of an outcome but from its relative value — we assess luck by standing reality next to its most salient counterfactual neighbor. If you lose a leg but think of how you almost lost two, you’ll consider yourself lucky. If you win second prize in a lottery, but miss first prize only by changing a digit at the last minute, you’ll consider yourself unlucky. Why wouldn’t you compare losing a leg to not stepping on the mine at all? Mentally altering an effect or a recent cause in a chain of events comes more naturally than mentally undoing an earlier cause. Once you’ve skewered yourself on a tree, you’ll tend to think of the untouched organs right next to the branch hole, not about how this never would have happened if you hadn’t taken the extra five minutes to floss this morning.

Luck isn’t a direct product of improbability, either. In one study, Teigan divided a roulette wheel into three wedges of equal size: one red, one yellow, and one blue. He divided another into eighteen sections of equal size: six red, six yellow, and six blue, interspersed. Landing on red wins. Eighty-five percent of subjects felt it was luckier to land on red on the wheel with eighteen divisions than the one with six, even though the probability was the same on both wheels. On this wheel, whenever you land on red, the slice is so narrow you’re almost landing on blue or yellow. It’s a close call every time. Similarly, of two boys standing near a large icicle that falls and lands between them, people judge the closer boy to be luckier, not despite the fact that he was closer to death but because of it.

Teigen concluded that the two factors defining luck aren’t positivity and improbability but rather the difference in value between reality and its most salient counterfactual, and the closeness of that counterfactual. How much better or worse things could have been, and how nearly they were. The chance of a cloud layer over Kokura wasn’t remarkably slim, and the city looked pretty much the same on August 10 as on August 9. Kokura’s luck comes from how easily we can imagine the clouds not being there and from how big a difference those clouds made.

And luck is not an impersonal impetus. Teigen has found that feeling lucky correlates with feelings of gratitude, a distinctly social sentiment. And the thanks are often of an existential kind, directed not toward a person but toward God or the universe or fate.

A few years ago, Eugene Subbotsky, a psychologist at Lancaster University who studies magical thinking, was strolling through Moscow with his young son, with no one around. They walked past an empty, parked car. “Just when we were passing by, the engine started,” Subbotsky told me soon after the event. “My son said ‘beebee’ — he calls cars beebees, he’s only three years old — ‘Papa, beebee.’ And then I look at his eyes, and I see his eyes widening.” The car starts moving. It swerves toward them. Finally, it turns a little more and hits an iron gate a few inches away. “We escaped death very narrowly,” he says. “I could have been smashed to pieces with my little son. I am a rational man, I am a scientist, I’m studying this phenomenon, but there are some events in your life that you cannot explain rationally. Of course you can always write it down to chance and say, ‘Okay, it’s a coincidence,’ but it’s such a rare coincidence that you start thinking mystically and magically about things.”

We define ourselves using narratives, according to Dan McAdams, a psychologist at Northwestern University and a leading researcher in “narrative psychology.” “To be an adult means, among other things, that you’ve figured out how you got to where you are and where you’re going,” he told me. “And the only way I know of to convey that to another person is through a story.” People also explain their pasts and futures to themselves in terms of narratives. “These stories function to give life a certain level of coherence,” McAdams says. Lives comprise many unrelated events, but our pattern-finding minds draw connections. We revise our histories to make better stories, omitting certain details and changing others so they conform to a cohesive, compelling, and often complimentary tale.

We compose our life stories using the data given — the somewhat random happenings of our pasts — but then we get the roles of the data and the interpretation confused: we stare in wonder at how well the events seem to fit the theme, forgetting that we custom-fit the theme to the events. Instead of drawing a target around a cluster of bullet holes and gawking at the aim of a marksman, you’re constructing a story around a series of occurrences and marveling at the insight and wisdom of providence. One stray bullet and you wouldn’t be who you are today.

One can certainly tell a good story of one’s life without resorting to unnatural intervention. Event B just logically followed event A. You decided X because you wanted Y. But it’s those crucial turning points where things could so easily have gone a different direction — the ones that invoke counterfactual thoughts — that arouse a sense of guidance. Some people would prefer to attribute these defining incidents to rolls of the cosmic dice, but perceiving fate can inject one’s narrative with greater meaning. Laura Kray and colleagues found in their research on counterfactual thinking and fate perception that those who considered alternative outcomes to their lives not only saw the real outcomes as fated but also more strongly agreed that “It made me who I am today” and “It gave meaning to my life.” Further, the data revealed that the sense of meaning was brought about by the perception of fate. “When people believe their lives are as they were meant to be,” the authors wrote, “they experience the gratification of being on the ‘right’ course and fulfilling their life’s mission.”

Laura King has found that, when combined with positive affect, referential thinking (seeing events such as traffic light changes as having a significance meant specifically for oneself) is correlated with finding one’s existence purposeful and meaningful. “It makes events that are random and chaotic feel like they belong in a coherent narrative about who you are and what your life is,” she says. “You become a character in a much more interesting narrative when the whole world is conspiring to take part in your personal drama.”

You want to believe that all those flukes of luck leading to where you are were somehow meant for you. Customized kismet means someone’s got your back. It also means that those events that happened for a reason may be building up to some future purpose. It gives the entire story of your life both continuity and a destination, something to strive for. You were put here for a reason, you matter, and you’re on a mission. Everything before now was to prepare you for your calling! The universe is counting on you! Now hop to it!!!

Excerpted with permission from "The 7 Laws of Magical Thinking," by Matthew Hutson, from Hudson Street Press.

Matthew Hutson, a former editor at Psychology Today, has a B.S. in cognitive neuroscience from Brown University and an M.S. in science writing from MIT. He has written for Wired, Discover, Popular Mechanics, Scientific American Mind, the Boston Globe and the New York Times Magazine. He lives in New York City.