When Mormons were socialists 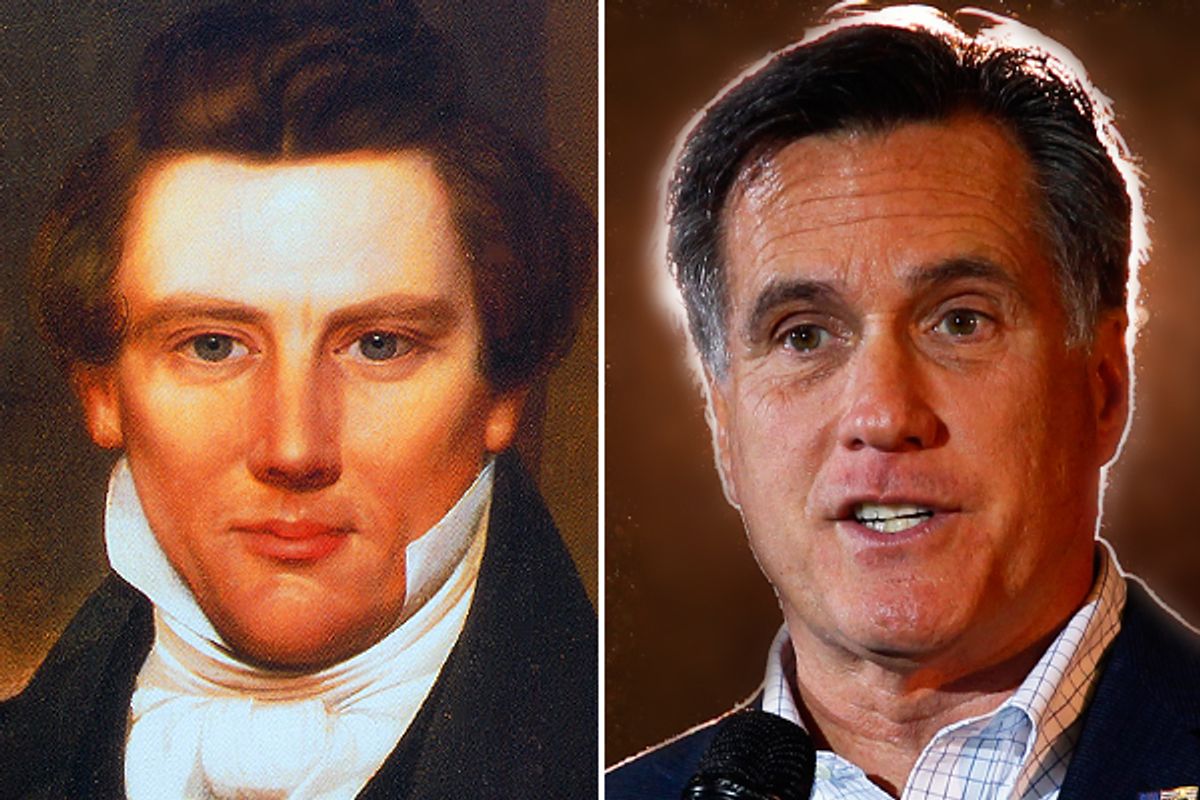 “You are cursed because of your riches!”

It was a bummer message that nobody wanted to hear. Samuel the Lamanite stood alone atop the great wall of the city of Zarahemla to warn the inhabitants of their pending destruction.

Now you have probably never heard of this Samuel, nor the capital city that was once the center of the Nephite nation. But Mitt Romney certainly has. In 6 BC, as the story goes, somewhere on the American continent, the inhabitants of this mythic city had grown decadent. There were extreme class divisions. Politicians were corrupt. The government disregarded the sick and poor.

God had called Samuel to essentially Occupy Zarahemla, to stand up and speak out against corporate greed and wealth accumulation. For his trouble, he was promptly thrown out the front gates. Undeterred, he bravely scaled the city’s exterior wall, evading a barrage of arrows and stones to stand defiant. He offered Zarahemla a choice: repent or be destroyed by God. Like any of us who have ever witnessed the ranting of a doomsday prophet, the Nephites couldn’t be bothered. Four hundred years later, Samuel’s prophecy would sorely come to pass. After decades of perpetual wars and extreme environmental upheavals, the inhabitants of Zarahemla were wiped completely off the continent and out of history.

They had been warned.

The rise and fall of the Nephite nation is a cautionary tale included in the Book of Mormon. The book purports to be the history of ancient American people, written by prophets who foresaw the present day and knew that calamity was coming. Joseph Smith reportedly translated the record by “the gift and power of God.” The prophetic message of the scripture is sharp; if Americans are obedient to God, we will be blessed with riches. If Americans set our hearts on riches and ignore the poor, we will be destroyed.

One hundred and eighty-two years after its founding, the Church of Jesus Christ of Latter-day Saints is certainly prospering. The Church has diversified into commercial enterprises, owning television and radio stations, universities, farms, banks and, most recently, retail. Last month, the Church opened City Creek Mall, a stunning billion-dollar downtown renovation in Salt Lake City featuring the Utah debut of Tiffany Jewelry, Michael Kors and Porches Design. This ambitious temple of high-end commerce sits adjacent to the iconic LDS Temple where sacred rituals are performed daily by the Mormon faithful.

Mitt Romney and City Creek represent the culmination of a great transformation within Mormonism. As an outcast faith, early Mormons experimented with communal living and alternative marriages. This original brand of Mormonism was typified by their rugged frontier prophet and polygamist outsider Brigham Young. In 1848, Young famously declared, “There shall be no private ownership of the streams that come out of the canyons, nor the timber that grows on the hills. These belong to the people: all the people.”

Romney perfected the art of “creative destruction” through leveraged buyouts and junk bond financing that enriched his investors at Bain Capital while at times devastating common workers. His critics from the 99 percent, he argues, are driven by envy.

Ironically, while Romney would prefer to discuss wealth inequality in “quiet rooms,” the topic consumed both Joseph Smith and Brigham Young’s sermons and writings. For a short time in the Book of Mormon, the Nephites abandoned their love of riches and established “Zion” -- a classless utopia that “had all things common among them; therefore there were not rich and poor, but they were all made free.”

The Nephite story provided the template for Smith and Young’s social experiments with communalism. They would both try repeatedly to replicate the mythic Zion. Smith repeatedly told his followers, “if you are not equal in earthly things you cannot be equal in obtaining heavenly things.” Young also championed wealth redistribution, “We have plenty here. No person is going to starve, or suffer, if there is an equal distribution of the necessaries of life.”

But like all utopias, the dream is easier than reality.

Facing the existential threat of federal disincorporation, the LDS Church responded by seeking assimilation at any cost. They began to privatize their cooperative business ventures throughout the 1880s and publicly abandoned polygamy in 1890. The course was set. To survive in America, Mormons would transform themselves into patriotic citizens. The quest for Zion would be replaced by the American dream. The rhetoric of communalism exchanged with a reverence for the free market. Romney’s ascendance to the nation’s highest office will affirm to Mormons that their faith is finally authentic – that they are the indisputable Horatio Alger of American religions.

But how would the poor fare under the first Mormon president? By all accounts, not well.  Romney has eagerly endorsed Paul Ryan’s budget plan to slash $3.3 trillion from programs that benefit low-income Americans. Furthermore, Romney refuses to consider increased taxes on millionaires or a modest increase on the taxable rates of capital gains. He encourages the wealthy to hoard their riches while the poor continue to struggle. It’s a familiar story he should know. Samuel the Lamanite continues to cry out to Romney in sacred protest, “The day shall come when they shall hide up their treasures, because they have set their hearts upon riches; cursed be they and also their treasures.”

He has been warned.