Dangers of an all-white GOP

Conservatives\' loyalty to their racist fringe isn\'t just disastrous for Republicans. It\'s bad for Democrats too 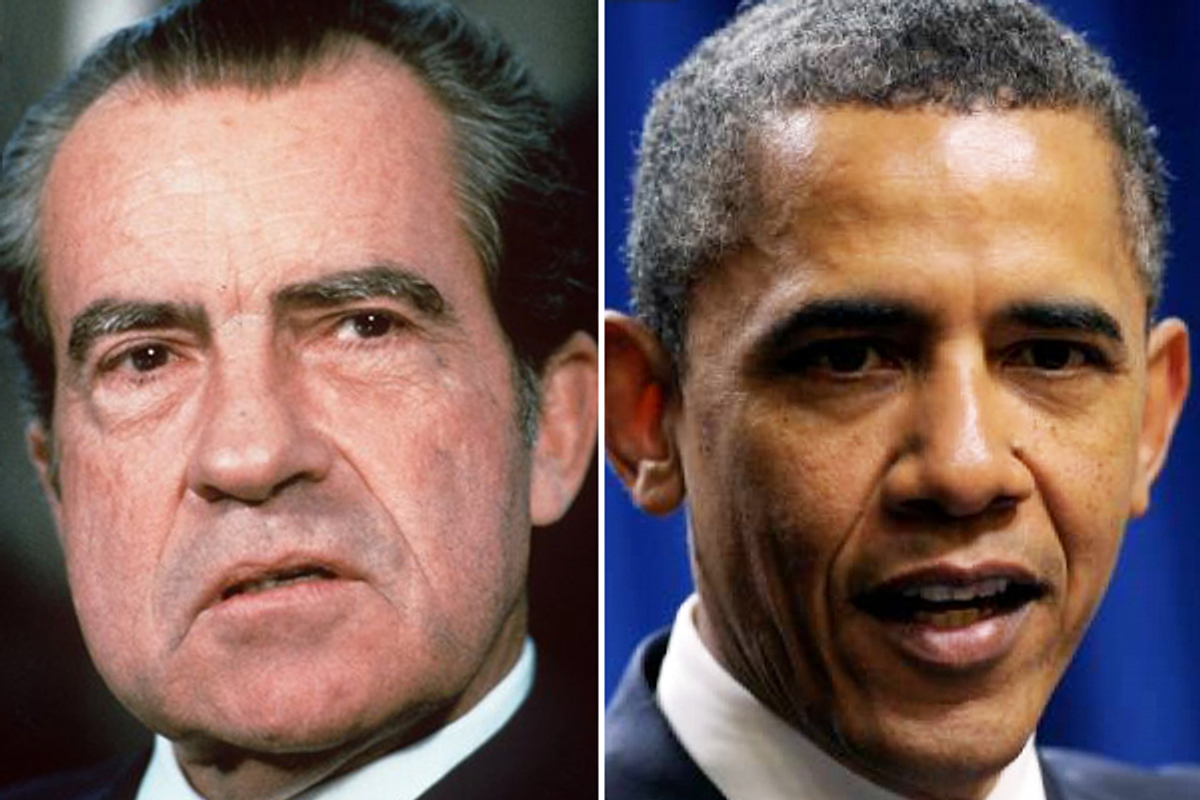 “If planning a trip to a beach or amusement park at some date, find out whether it is likely to be swamped with blacks on that date… Do not act the Good Samaritan to blacks in apparent distress, e.g., on the highway… In a pure meritocracy there would be very low proportions of blacks in cognitively demanding jobs.” These are just a few of the pearls of anti-wisdom offered by conservative pundit John Derbyshire in his instantly infamous essay, “The Talk: Nonblack Version.” Derbyshire’s employers at the National Review were quick to distance themselves from him and his racist manifesto, which was written as a response to the outcry over the hunting and killing of Trayvon Martin.

But as other commentators have pointed out, there’s more to this story. For one thing, “Derb” has been producing openly racist (and homophobic) material for years now without repercussion. So why did the premiere intellectual journal of American conservatives only disassociate itself from a bigot once the very last vestiges of plausible deniability had been stripped away? The answer lies in the fact that the conservative movement, while not racist in and of itself, is beholden to racists who support it. And in order to maintain their support, it appeases them either actively or through sins of omission in ways that alienate other potential supporters and create barriers to real progress on racial justice.

I want to be clear that conservatives are not inherently racists, just as progressives are not by default free of racism. While some conservative policies, such as restricting voting rights, cracking down on undocumented immigrants, and slashing the social safety net may have racially disparate outcomes in practice, there are intellectual and moral arguments for each of these that that have nothing to do with race. Sadly, Republicans often fail to make them because they’re busy sending more coded signals than a third base coach in order to appease the most reactionary elements of their base. And when taken in aggregate, it’s easy to see why minority groups perceive the conservative agenda as actively hostile toward their interests, even if that’s not the intent.

The uneasy alliance between high-minded conservative wonks and unreconstructed racists is a legacy of Richard Nixon’s Southern Strategy, which used civil rights as a wedge with white voters to turn the formerly Democratic “Solid South” into staunch Republican territory. But while that approach has continued to reap short-term rewards, it’s a bad bet in the long run. As Roosevelt Institute Fellow Dorian Warren has noted, “the Republican strategy is basically to be a white party and a white southern party. The time is ticking on that demographic in this country.” With the voting bloc of angry white conservatives from the old Confederacy giving way to the most diverse and progressive generation in history, Republicans risk political extinction if they can’t refurbish their image and adapt their policies accordingly. In this year’s Republican primaries, even states with the largest black populations have registered only 1 to 2 percent black voter participation. And despite the GOP’s hope that it could peel away minority voters who agree with them on social issues, Barack Obama enjoys approval ratings in the high 80s among black voters and retains strong support from Latinos when matched up against his Republican rivals. Yet the conservative base seems stubbornly resistant to change, and to quote Donald Rumsfeld, you go to war with the army you have, not the army you wish you had. Thus, even many moderate and mainstream conservatives are forced to politely clear their throats and look away from all but the most egregious examples of racism among their allies. Without them, they wouldn’t have the votes to win elections.

The right is clearly sensitive to this issue, or it wouldn’t be so bashful when the Derbyshires of the world let their fig leaves drop. But instead of addressing these internal tensions, it tries to turn the tables by accusing progressives of “playing the race card” (i.e. mentioning that racism exists). As Alex Pareene wryly noted, many conservatives seem to operate under the assumption that “accusations of racism are the new racism, and said accusations are invariably politically motivated.” This tendency has been on full display in the case of Trayvon Martin, from labeling President Obama a “race hustler” for extending his sympathies to Martin’s family to the Free-Beacon’s blunt headline, “Registered Dem Killed Trayvon.” Sure, George Zimmerman shot a 17-year-old boy to death, but the real question on everyone’s mind was who he voted for.

While these attempts to turn racism into a partisan issue might help to assuage some guilty consciences, the results are ultimately bad for both conservatives themselves and the country as a whole. The need to keep the racist fringe mollified means that once Republicans are in power, they inevitably set to work implementing discriminatory and divisive laws like the ones mentioned above – even, as my colleagues Bryce Covert and Mike Konczal have pointed out, when their electoral sales pitch is based on promises of fiscal discipline and economic recovery. This also has consequences for their attempts to broaden their base. It’s no shock that outreach toward Latinos has failed when 91 percent of them want progressive immigration reform like the DREAM Act yet it can barely garner single-digit support among congressional Republicans. And on a broader level, it’s impossible to seriously discuss or redress racial inequality and injustice if someone keeps changing the subject.

Some progressives might be tempted to say, “So what? Aren’t we trying to discredit conservatives anyway? Let’s just sit back and watch the train wreck.” But in truth, the inability of the conservative movement to escape the racist albatross around its neck is bad for progressives, too. If we’re to be measured by the quality of our opponents, what does it say about us if we win because the other guys got caught e-mailing each other Photoshops of Barack Obama as a witch doctor with a bone through his nose? There’s no reason for progressives to push ourselves to strengthen our arguments or develop bold new solutions to seemingly intractable problems unless there’s an equally powerful, credible, and clear-minded counter-force. Besides, in a two-party system, the other side is going to take the reins of power at least some of the time. When that happens, we want them to be people we can debate in good faith.

This sad state of affairs wasn’t inevitable. For a brief moment, Barack Obama’s victory in 2008 seemed to signal a sea change in America’s eternally fraught racial politics. The last, greatest barrier had been surmounted and a new generation, unburdened by the prejudices of the past, had risen to power, ready to tackle the big issues and debate the questions that really mattered. But the idea of Obama being a “post-racial” president soon degenerated into a punch line as many Republicans, terrified of the new president’s broad appeal, gave in to their darkest impulses. The most high-profile and embarrassing of these efforts was the attempt to cast doubt on Obama’s birth records, which culminated with Donald Trump beclowning himself by basing his entire presidential campaign around an easily debunked conspiracy theory. (Oddly, Trump was not asked to produce any documentation to explain what part of the planet Earth produces vividly orange people with gossamer hair.) Instead of putting the last nail in racism’s coffin, Obama’s historic triumph brought the cranks out of the woodwork, spooked by a premonition of their demise.

But all hope is not lost just because some conservatives continue to write clueless op-eds about how white privilege doesn’t exist because someone who may or may not have been black may or may not have stolen a bike. Even if electoral concerns make the right hesitant to repudiate and cut ties with its more retrograde allies for now, it remains a demographic reality, as Jonathan Chait has written, that the current conservative coalition must either change or die – and conservatives are nothing if not resilient. And if conservatives do manage to join the 21st century and start winning over minority groups, it will mean that elected Democrats will actually have to start working for their votes again. As Bryce Covert has written, “once we find ways to get our representatives to truly represent the diversity of our people, more Sarah Palins and Herman Cains will be a good sign. Progressives won’t have to vote for them, but we’ll know that they come with the territory of greater equality.” Once that happens, and once conservatives start proactively challenging racism in their ranks instead of shouting “I’m rubber; you’re glue!” when called on it, maybe we can finally have an adult conversation about race and move forward as a united country.