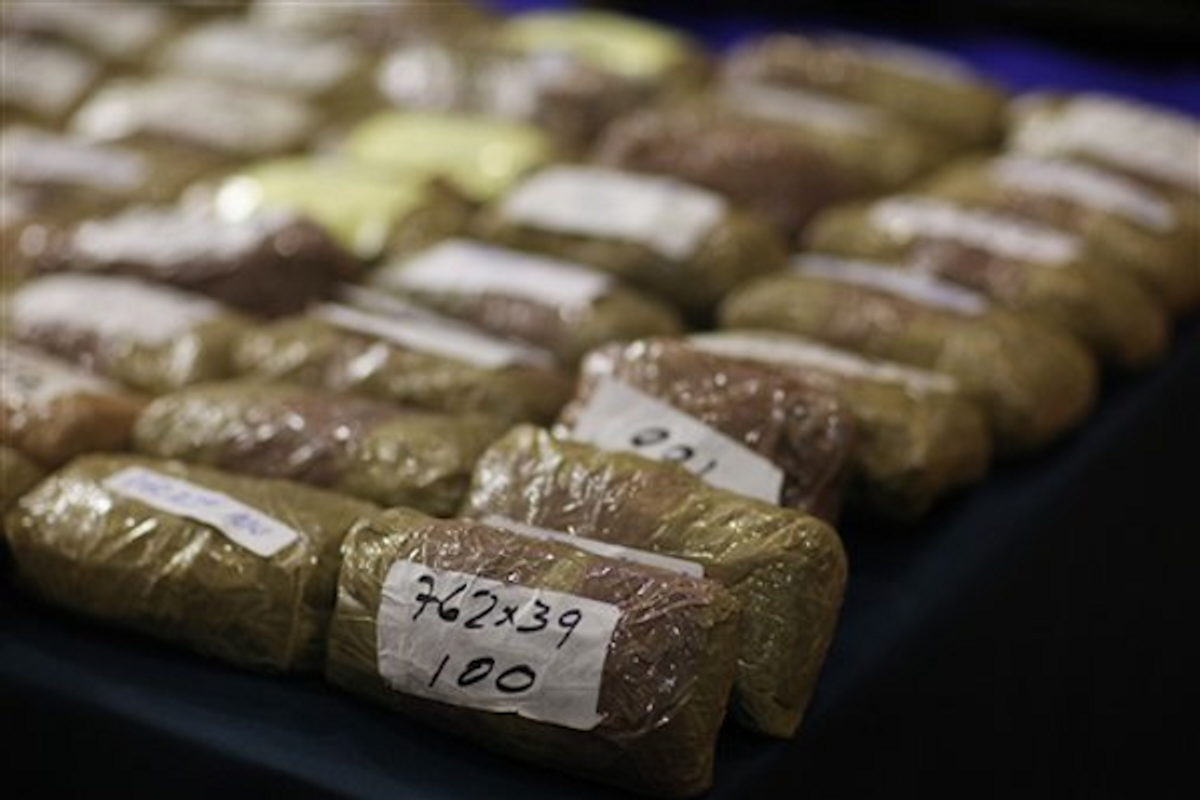 BOSTON — When the world looks back at 2012 in the Americas, one burning debate will stand out amid the year’s usual chatter: Should Latin America legalize drugs?

What was once taboo has now got presidents talking in public and writing charged commentaries. They’re trying to frame the new drugs debate in terms that Washington — which firmly stands by the drug war solution — will understand: supply and demand.

The U.S. government says it will listen, but will not bend.

Some Latin leaders are discussing the need to experiment further with decriminalizing possession of drugs. Lawmakers are also proposing to scrap jail terms for growing coca and cannabis.

The bottom line: Softening anti-drug laws would ultimately drive down narcotics prices, advocates say, and that would crimp revenues for the deadly cartels that wreak havoc from the Andes to Mexico — and across its U.S. border.

Though far from concrete, the push comes as Latin leaders flex their might and independent voices as Washington's influence wanes in the Americas. What's more, some of the United States' closest allies — moderates and conservatives alike — are leading the charge toward change.

Ethan Nadelmann is the executive director of the Drug Policy Alliance, a New York-based independent research and advocacy group, and has advised Latin American leaders on this bold policy rethink. GlobalPost caught up with him during his recent visit to a conference at Brown University.

GlobalPost: Why that racket on legalizing drugs in Latin America?

Ethan Nadelmann: What’s emerged is a critical mass of support for opening up the debate and putting all options on the table. And all options include decriminalization, legal regulation and other alternatives to the drug war.

One [factor] is the ongoing and mounting frustration that not just governments but many people in Latin America feel with the negative consequences of the U.S. war on drugs in Latin America. Many have concluded that there’s no way to defeat what is essentially a dynamic global commodities market. … Marijuana, cocaine, methamphetamine, heroin — they are global commodities markets much in the same way that alcohol, tobacco, sugar or coffee are. So long as there is a demand, especially a significant demand in a country like the United States, there will be a supply. The demand is growing worldwide in many respects.

What stands out among the consequences of the drug war?

The escalating violence in Mexico. [President Felipe] Calderon’s attempt to take on the criminal organizations. The 50,000 dead. The spread of this traffic and violence to Central America. The widespread realization that it’s only a matter of time before it floods into the Caribbean, once again, as it did back in the ‘80s.

How has the debate been shaping up?

You now have [Colombian] President Juan Manuel Santos who has, in a very cautious way, been very strategic in speaking out a bit more, looking for other allies. You have President Calderon who’s been frustrated in his relationship with the United States on this area. He came to the U.S. last year and began to say that the U.S. should look at "market alternatives" if they were unable to reduce the demand.

You’ve had some growing movement of decriminalization of [drug] possession in countries from Mexico to Colombia to Ecuador to Brazil to Argentina.

You also have, in the last few years, the rapid growth of the drug-policy movement, activist groups like we have in the US, also spreading around Latin America.

And then you have the thing that finally clinched it, when President Otto Perez Molina [of Guatemala] decided shortly after he entered office to make this a priority. That really was a transformative moment. He emerged as the ally that President Santos in Colombia had been looking for.

So that wasn’t just political posturing?

Initially people were suspect about [Perez’s] motives, but it became apparent that he was serious about this, engaging it for substantive reasons and he began to clearly show a commitment on this issue and to educate himself more deeply. And then he began to make a more active effort to interact with other Central American leaders, and to interact with Santos, Calderon and the others. That is what enabled this critical mass to emerge.

These are bold proposals. Has it helped that Washington's dominance seems to have waned in the region?

The sense of fear and intimidation that many of these governments feel regarding the United States has diminished. There’s a growing sense of independence and willingness to speak their mind and not be so under the thumb of the U.S. government as they were in the past. Mexico, Brazil, Colombia … many of these countries have booming economies, there’s a greater sense of independence.

Are these leaders just talking about decriminalizing marijuana possession, or something else?

They’re putting forward different ideas about how you deal with bigger problems of the large-scale production and trafficking of cocaine, heroin and methamphetamine. If you look at the spectrum you’ll have somebody like former President of Mexico Vicente Fox saying clearly the time has come to legalize all of it. You’ll have somebody like [Colombia’s] Santos giving an interview to the Guardian saying legalize cannabis, and maybe cocaine too — but he’s just kind of floating an idea.

Is this the first time we’re hearing "legalize it" from Latin America?

This debate has been bungling around for many years. And over the years, more and more people have been exposed to the arguments regarding the failures of a prohibitionist drug-control policy and the potential benefits of an alternative.

The Latin American Commission on Drugs and Democracy — chaired by former presidents Fernando Henrique Cardoso [of Brazil], Cesar Gaviria [of Colombia] and Ernesto Zedillo [of Mexico] — released its report in early 2009 and that was really a breakthrough. These were three distinguished presidents all from the center, center-right of the political spectrum, joined by many other prominent ministers and intellectuals and publishers, saying we need to move in a new direction, we need to break the taboo, to understand the European harm-reduction approach better, to move in a direction of decriminalization of cannabis. That planted a lot of seeds in Latin America.

That was followed up by the Global Commission on Drug Policy, which issued its report in June of last year. It was not just presidents. They also had former Secretary of State George Shultz, [ex-chair of the Federal Reserve] Paul Volcker, Kofi Annan, [Virgin entrepreneur] Richard Branson and a whole range of distinguished people. That report went a step further. They talked about experiments in legal regulation of cannabis, a whole range of other innovative strategies. You had … distinguished folks legitimizing this thing.

Did you work on those reports?

I was an adviser to both.

How far has this debate come today?

For most of [the leaders involved], including Santos and Perez Molina, right now it’s more about sparking a discussion. It’s about saying ‘we spent the last 20, 30, 40 years experimenting with different drug war options — interdiction efforts, law enforcement strategies — and look at the mess we have today. We need to systematically look at the alternatives. We need to have government officials interacting with experts in public health, criminal justice and economics.’

There’s a growing consensus that the movement toward legal regulation of cannabis is perhaps inevitable and certainly the right thing to do. There’s also an emerging consensus that the personal possession of smaller amounts of any drug should be decriminalized. That’s important because [criminalizing possession] basically results in the arrest and incarceration of large numbers of people who are mostly poor and of darker skin.

It’s not that they’re saying legalize drugs tomorrow, it’s the provocative sort of statement that gets people paying attention, and realizing that we better start talking about this in earnest.