What Mitt won’t say in public

At a fundraiser he thought was private, Romney outlines specific cuts and brags about the “gift” of Hilary Rosen 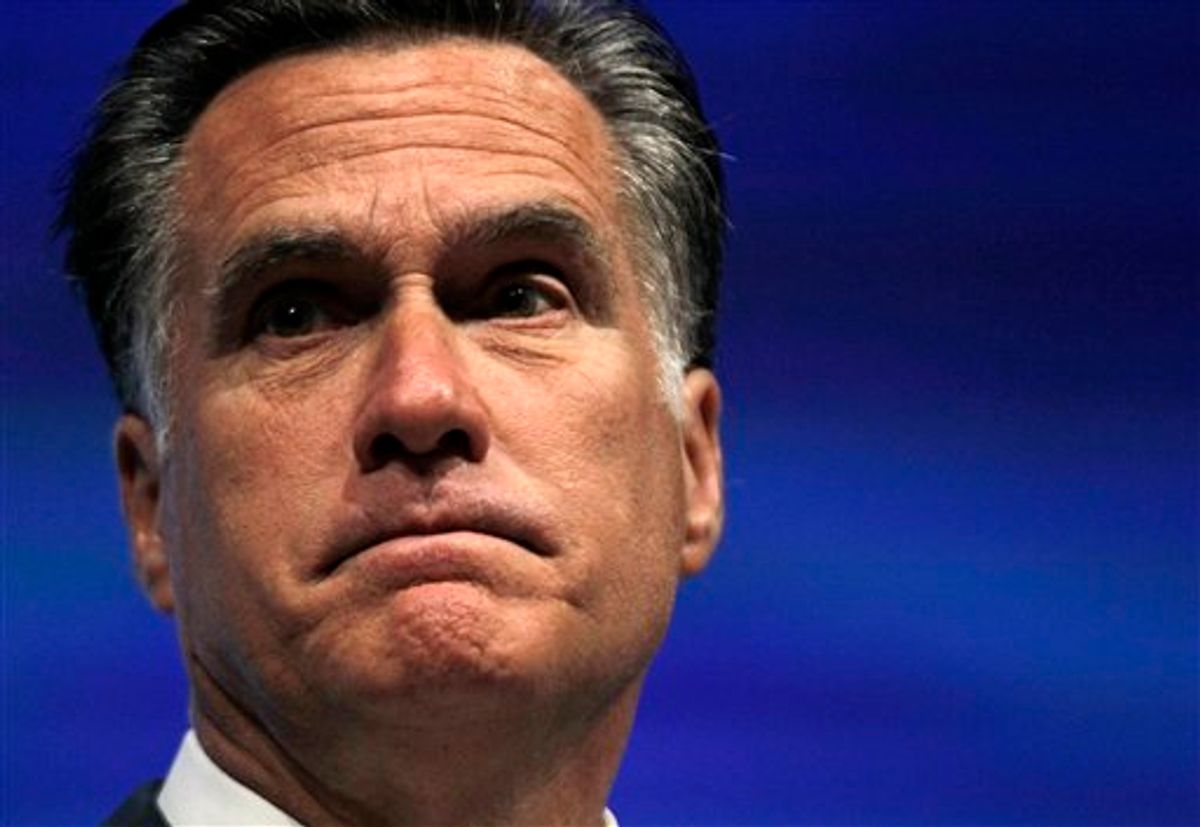 Just two weeks ago, in what amounted to his opening speech of the general election campaign, Mitt Romney claimed that President Obama has big second-term plans that he’s afraid to tell voters about.

"He does not want to share his real plans before the election, either with the public or with the press," Romney said on April 4. "By flexibility, he means that what the American public doesn't know won't hurt him. He is intent on hiding. You and I will have to do the seeking."

Given the politically expedient ideological shifts that have defined his political career and his lack of specificity on the most sensitive issues in the current campaign, there was plenty of irony in Romney’s charge – irony that is further underscored by what happened last night. Per NBC’s Garrett Haake:

Mitt Romney went well beyond his standard stump speech at a closed-door fundraiser on Sunday evening, and offered some of the most specific details to date about the policies he would pursue if elected.

In a speech to donors in the backyard of a private home here, the former Massachusetts governor and presumptive GOP presidential nominee outlined his plans to potentially eliminate or consolidate federal agencies, win back Latino voters and reform the nation's tax code.

The fundraiser was held inside a Palm Beach house, but apparently Romney’s remarks were audible to reporters gathered outside.

From a policy standpoint, the biggest revelation appears to be that he would look to eliminate the second home mortgage deduction and deductions for state and local taxes in order to keep his promise to cut tax rates across-the-board without lowering the overall share of the tax burden that wealthy Americans shoulder.

Perhaps more notable, though, were comments from Romney – and his wife – about his campaign’s strategic thinking.

Romney spoke in broad terms about his desire to merge or eliminate various departments and agencies and floating HUD as a possible contender for elimination, before saying: “But I'm not going to actually go through these one by one.” He then apparently told the crowd that he would overhaul the Education department but wouldn’t eliminate it altogether, in part because trying to do so would cause severe political blowback.

Essentially, Romney was admitting to his donor friends that his goal as a candidate is to avoid letting voters see the fine print on most of his promises, lest they find something to object to. This smacks of the intentional campaign trail vagueness that he’s been accusing Obama of. It also reflects the same calculation that Democrats say defines the Paul Ryan budget blueprint that Republicans have rallied behind, a document that calls for paying for massive tax cuts by closing loopholes and ending various deductions without specifying any.

Romney also acknowledged the struggles he faces with Hispanic voters, among whom he trailed Obama by 56 points, 70 to 14 percent, in one recent survey. Here, Romney’s problems are twofold. There’s the ultra-hard-line posture on immigration he adopted in this year’s Republican primaries, and then there’s his party’s overall reputation for similar hostility. He told the donors that “we're going to be able to get Hispanic voters” by running on the GOP’s version of the DREAM Act and focusing attention on the economy.

Perhaps the most interesting nugget: Both Mitt and Ann Romney were apparently gleeful in talking about the comment from Democratic talking head Hilary Rosen that the Romney campaign pretended last week was an attack by an “Obama advisor.” Per Haake:

"It was my early birthday present for someone to be critical of me as a mother, and that was really a defining moment, and I loved it," Mrs. Romney said.

Gov. Romney went further in engaging the so-called "war on moms" that followed in the media — upon which his campaign has been aggressively fundraising — calling it a "gift" that allowed his campaign to show contrast with Democrats in the general election's first week.

When Romney accused Obama of keeping his real plans from voters a few weeks ago, it demonstrated his desire to wage an “I’m rubber, you’re glue” general election campaign. As Steve Benen put it at the time: "It's a basic idea we've all seen many times. A politician and his or her team identify their biggest weaknesses and then start accusing their rival of being guilty of that same thing."

If Romney wants to pull this off, his campaign might want to make sure he really is behind closed doors the next time he talks to a roomful of donors.