Which way for Obama?

His approval jumped after he adopted a feistier populist tone last fall. So Third Way centrists want him to stop it 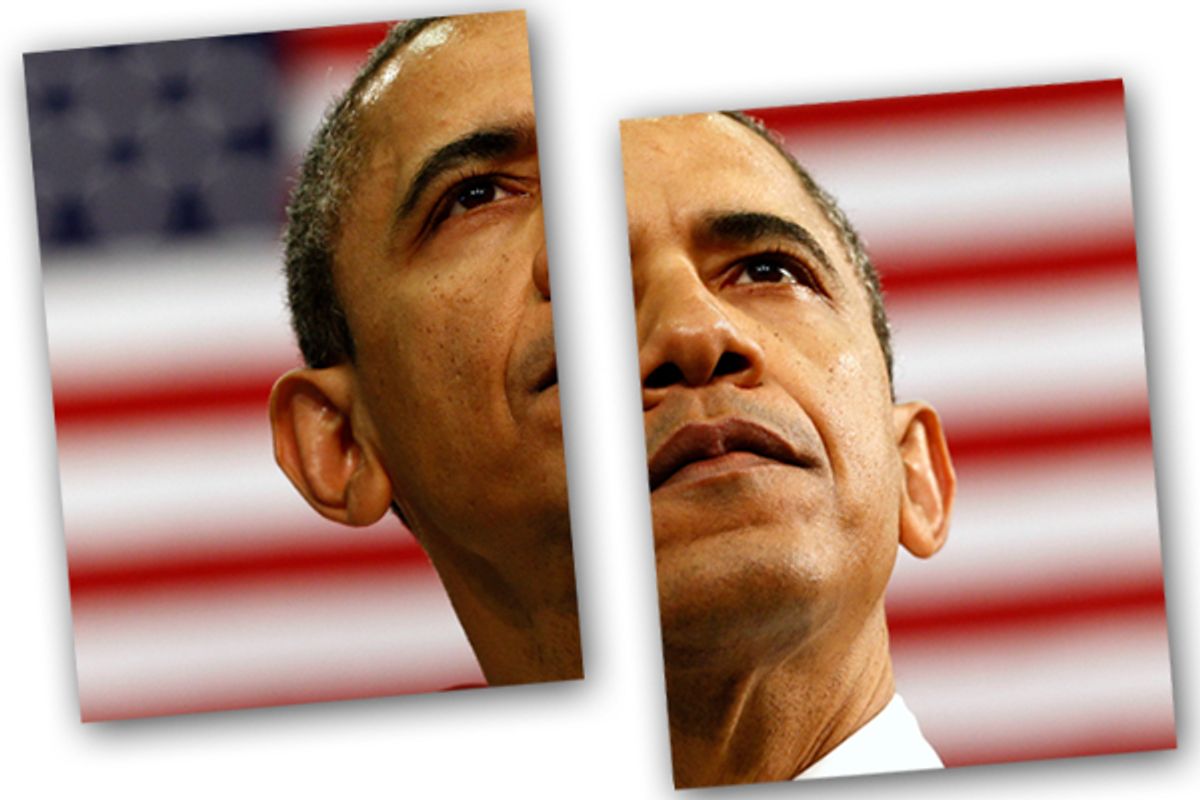 The question no one can answer definitively is why Obama's fortunes improved after his miserable summer. Now that the race is a one-on-one contest, the debate over that question will intensify.

I'm of the oft-stated opinion that the president's feistier populist rhetoric has driven his improved standing in the polls (more on why I think that shortly). But along comes the New York Times' Bill Keller, with almost no data, to tell me I'm wrong. Keller insists Obama is turning off independents by being what he calls "a plutocrat-bashing firebrand" and pushing "Robin Hood" politics like the Buffett Rule. The source for Keller's certainty? A recent poll by Third Way, a group that exists expressly to pull the Democratic Party to the right.

Third Way's much-hyped poll warned Obama against his newfound passion for "fairness," and particularly the issue of income inequality, suggesting that independent voters in swing states are put off by it. Those "swing independents," Third Way says, prefer a message of "opportunity" to one that highlights income inequality. If you're like me, you'll say there's no conflict, since Obama often makes the case that reducing income inequality creates more opportunity, for everyone. But Third Way insists, with no evidence that I can see, that the fairness message is just a big downer and will overpower the "opportunity" messaging if they're combined. They also make a big deal of swing independents' concerns about the budget deficit, even though the group's "number one priority," in Third Way's own words, is "economic growth and jobs." (Other than that, it's a great poll.)

There are many ways to take apart Third Way's results: Mike Lux and Jonathan Chait did a terrific job. Lux challenged its methodology, suggesting that the poll undersampled both seniors and working-class voters, two important swing groups who, in other surveys, seem much more open to a populist message.

Chait pointed to the way the group appears to have crafted their questions to get the answers they wanted – that's why advocacy polls are so rarely cited -- with bland nostrums about fairness, opportunity and deficits. A recent Greenberg Quinlan poll on similar issues, using very concrete language, found that roughly three-quarters of those polled backed a feisty fairness message. Chait notes:

But Bill Keller ignores all that and uses the Third Way poll anyway to warn Obama against too much populism. As Greg Sargent pointed out, Keller even ignored his own paper's polling on the way to his dubious conclusion: 55 percent of independents said investment income should be taxed the same as employment income in a recent CBS/New York Times poll, and 58 percent of independents say rich people don't pay their fair share. Last week's Washington Post poll revealed that a majority thinks unfairness in our economy is a bigger concern than "overregulation," by a 57-32 margin.  (Other than that, Keller's column was great.)

Even if Third Way is wrong, we still don't have an answer for why the president's numbers improved after the summer. We know they're partially driven by a shift among women voters, and it seems like common sense to attribute that to the so-called GOP War on Women, on national issues ranging from contraception to funding for programs that help women and children most, and on state-level measures like transvaginal ultrasounds, fetal-personhood amendments, and Arizona's draconian antiabortion law, signed by Gov. Jan Brewer last week.

Another factor behind Obama's improved fortunes has to be the improved economy. In a rough way, Obama's climbing approval rating seems to track a decline in the unemployment rate: According to Real Clear Politics' polling composite, he hit a low of 43 percent approval (with 53 percent disapproval) at the end of August, when unemployment was persistently over 9 percent. By March, unemployment had dropped to 8.2 percent, and Obama's approval rating had climbed to a hair shy of the magic number of 50.

But it's not that simple. From early July to late August, with unemployment steady, the president's approval rating dropped from a tie of 46 percent to a 10-point negative gap: 53 percent disapproval to 43 percent approval. All that happened in there was the depressing debt-ceiling battle, after which even most independents said they wished the president had stood up to the GOP.  His approval ratings stayed in the low 40s through early December, though unemployment began to decline in September. They didn't really begin to rise until January, after the president's populist speeches in Osawatomie, Kan., and at State of the Union time.

Besides, an earlier decline in the unemployment rate, from 10 percent in October 2009 to 9.4 in June 2010, was actually accompanied by a decline in Obama approval, from 52-40 approval-disapproval in October to 47-47 the next June.

All that is by way of saying: Declining unemployment alone can't explain the relative change in the president's political fortunes. His return to the populism that marked the end of the 2008 campaign almost certainly played a role. He has set up the 2012 election as a contest between the GOP's message of "You're on your own" vs. "We're all in this together." His economic feistiness, not just the GOP's contraception craziness, is likely driving his revival among women, who remain the most vulnerable in a recession.

Moreover, I'd argue that the president is actually doing a decent job combining a message that explains how fairness can also lead to more opportunity, despite Third Way's conviction that it can't be done.  In my opinion, he could be even more explicit. Early in his presidency, Obama was slow to explain to the American people the way government in the past – from the 1930s through the early '70s -- helped create opportunity by deliberately reducing income inequality to build a middle class that became the envy of the world – a middle class that Republican policies are dismantling. There is no conflict between fairness and opportunity, unless your definition of "fairness" involves skewing the tax code even more overwhelmingly toward the wealthy.

I should say here, and I'll say it again every time I write about Obama's numbers until November: This is going to be a very close race, and people who think Romney is mortally wounded by the primary battle are wrong.

But the answer isn't watering down Obama's new message, it's taking the opportunity to make his message even clearer: Fairness, including reducing income inequality, creates opportunity and prosperity. We all do better when we all do better.