ALEC: We will stop being gun nuts now 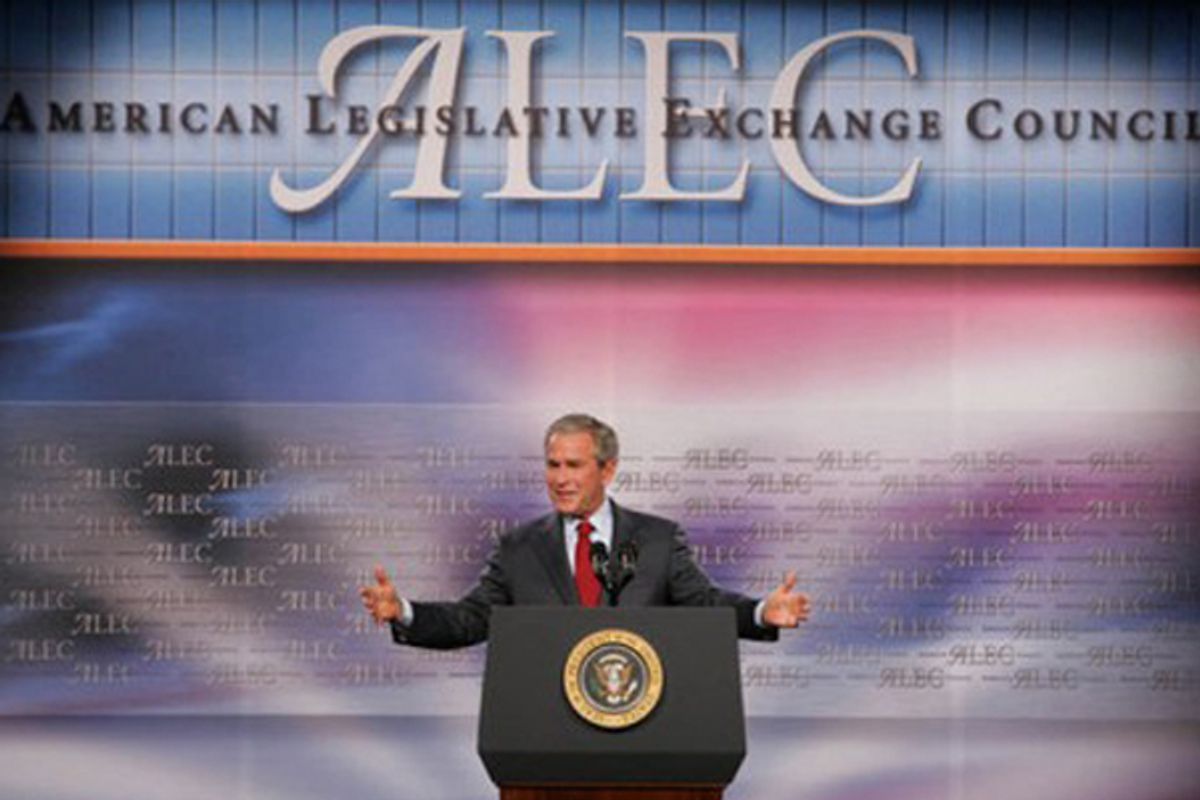 The American Legislative Exchange Council, or ALEC, is a group that helps major industry players write their own legislation that Republicans then pass in state legislatures across the country. Traditionally, ALEC would draw up and promote bills limiting labor organizing rights and weakening workplace safety regulations and environmental protections, because those things anger the Market Gods. Fewer of those things means more money for ALEC's funders! Recently, though, ALEC also began dabbling in things that wouldn't make anyone any money but that happened to be right-wing political priorities.

ALEC is now shutting down its "Public Safety and Elections" task force. ALEC's Public Safety and Elections task force's goals were twofold: to improve "public safety" by making it easier for citizens to carry guns everywhere they go and to shoot certain people without fear of arrest or prosecution, and to improve elections by making it harder for politically undesirable types to exercise their right to vote. (Why were gun rights and voter disenfranchisement the purview of one task force? Those two issues really have very little in common besides being of supreme importance to paranoid white people.)

What happened is, people suddenly noticed that self-defense laws had recently become much more "robust" (slash-"insane") in lots of states after this guy in Florida named George Zimmerman shot and killed an unarmed black teenager named Trayvon Martin and then somehow was not arrested. These new self-defense laws were widely blamed for the police reaction, or non-reaction, and while the NRA had predictably lobbied for them in the various states where they passed, it turned out that ALEC had been instrumental in drafting these laws and others like them that had nothing to do with being "pro-business" but everything to do with quietly remaking the nation into a right-wing paradise.

So major corporations began abandoning ALEC, because they hadn't signed on for the full right-wing culture war. While Coca-Cola has a vested interest in, say, stopping public health initiatives, there's no compelling profit-based reason for it to support the dismantling of gun control legislation. People do not get thirstier when they are carrying concealed firearms, as far as I know. Kraft does not, as a company, have any interest in making it more difficult for poor people to vote.

So! ALEC is giving up on the items of its agenda not directly related to helping giant corporations make as much money as possible without fear of lawsuits or union agitation. Because those are less "hot-button" issues.