Is Obama no better than the GOP? 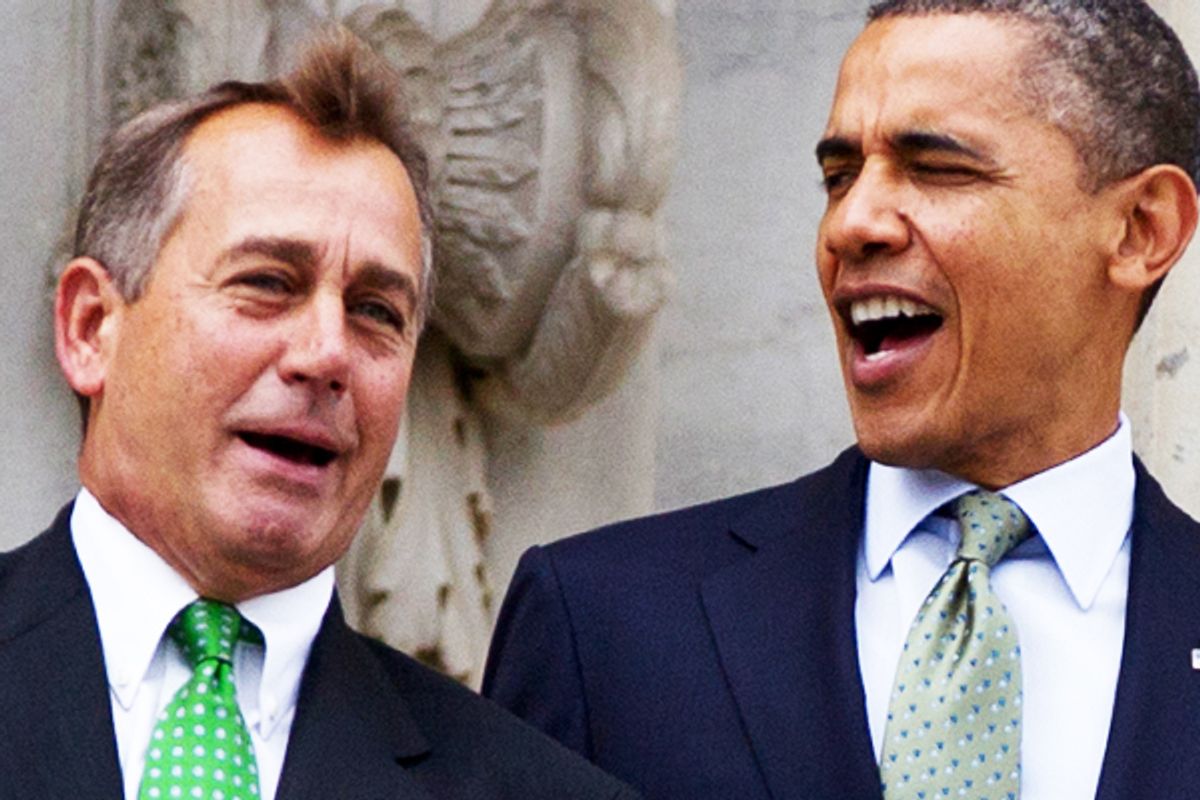 Amid all the evidence that partisan polarization is running rampant and perhaps even threatening the republic, a hearty band of ideologues still believes there’s not a dime’s worth of difference between the parties and that it really doesn’t matter who will win the presidential election in November. The latest round of bloggy discussion on this kicked off with a post from Dave Schuler late last week, who made the case in list form. I’ll quote some of it:

Regardless of who is elected the U. S. will continue to be interventionist in its foreign policy.

Regardless of who is elected the “Bush tax cuts” will be sustained. There may be some tweaking around the edges…

Regardless of who is elected the detention center in Guantanamo will be maintained.

Regardless of who is elected the security apparatus put in place in the aftermath of the attacks in New York and Washington, DC in 2001 will only be expanded.

And yet: Republicans and Democrats fight hard over elections, and partisans on both sides certainly feel that there’s a lot at stake. Are they nuts?

Basically, there are two stories here.

One is that while presidents do in fact try to keep their promises, they are often thwarted by others within the system. That’s not just a story about Congress. The bureaucracy can also defeat presidents; so can interest groups, or the courts, or state governments or foreign governments, including at times very friendly foreign governments. Indeed, it’s usually difficult for outsiders to tell exactly who defeated the president on some policy issue – even when the final battle takes the form of a congressional vote, it may be, for example, that the permanent bureaucracy in some executive branch agency really played the key role and successfully manipulated Congress to get the result it wanted.

And yet: Just because presidential power is very limited does not mean that it doesn’t exist. Presidents often lose, but they do have some agenda-setting ability, and they have a fair amount of bargaining ability – overall, far more than any other single policymaker. To take just one fairly basic example: There’s a good chance that Barack Obama was free to choose whether to push hard for healthcare reform or climate legislation. Had he chosen the latter, or if John McCain was in the White House, there’s simply no chance that healthcare reform would have become law.

And I can hear the criticisms already: Yes, but why should liberals support a GOP-inspired policy such as the ACA anyway? What about single-payer? Which gets to the second story: For some, even if liberal presidents did get their way on every campaign promise it would still be meaningless, because it’s all within the context of accepting the basic Washington policy consensus – whether it’s a mixed economy instead of socialism, or (for libertarians) a welfare state instead of a unregulated market economy, or an internationalist foreign policy.

There’s no doubt that there’s a bit of truth in this kind of perspective. If you believe that it is critically important, say, that U.S. foreign policy and national security institutions return to a pre-WWII condition, then you’re certainly going to be disappointed in the outcome of the 2012 election. Even if your ideal state is (oddly enough, to me, but OK) the 1990s, then you’re still going to be upset that both parties buy into the Department of Homeland Security (a Democratic invention, don’t forget), drone attacks with little effective oversight and massive growth of an apparently permanent national security bureaucracy.

And yet: it’s still a mistake to ignore differences within the broad consensus. Those who care about civil liberties can be quite critical in their disapproval of Barack Obama (and Bill Clinton before him, and really most U.S. presidents), even finding some issues in which Obama might be worse than George W. Bush, and still recognize significant differences between Obama’s record and Bush’s – or, Obama’s record and Mitt Romney’s likely record. The healthcare reform passed by Obama and the Democrats might not work – but surely it’s far different, in important ways that already matter to lots and lots of people, than the old status quo. And there’s little question that a President McCain wouldn’t have passed any significant healthcare reform.

Going to Schuler’s list: Yes, both Obama and McCain will be interventionist. But if one would invade Iran and the other wouldn’t … well, that’s a massive difference, even if both would embark on Libya-type adventures. There’s a good chance that Guantanamo stays open regardless of who is elected, but Romney’s supporters include many who support reinstituting torture; that’s extremely unlikely to be U.S. policy if Obama is reelected. Again, I’d call that a massive difference. On taxes, too, one candidate supports modest increases in tax rates for upper-level taxpayers, while the other favors large tax cuts from current levels; if either party wins a landslide, it’s likely that those positions would be enacted. No, it would not be a return to 1990s levels (nor, most likely, would it get taxes quite to where Ron Paul might want them), but again, there’s quite a bit of money for both individuals and the U.S. Treasury on the line.

Dismissing these differences amounts to ignoring things that will make a huge difference in people’s lives in order to stay loyal to ideals. Which is all well and good in some circumstances, but not in politics, where the ideal generally has no place, as thinkers as far back as Plato realized. If you want to engage in politics meaningfully, you must act, and that means making what at times are very difficult, even very painful, choices. One of my favorite quotations about politics is from Bonnie Honig, working from an essay by Bernice Johnson Reagon about taking collective action:

Coalition politics is not easy.  When you feel like you might "keel over at any minute and die," when "you feel threatened to the core," then "you're really doing coalition work."

Supporting a candidate who you know will let you down is a lot harder than supporting one who you can pretend will be perfect if the impossible happened and she was elected, or just sitting out the election entirely because neither candidate measures up. It may take some courage to support someone despite important, serious, substantive reservations. It is, however, what needs to be done in a democracy. That certainly doesn’t mean anyone should support imperfect candidates uncritically – and in a complex democracy such as the United States, there’s nothing at all wrong with choosing to focus one’s energies where it will make the most difference, which is not always the presidential contest. But to pretend that the president makes no difference is just as bad a mistake as to believe he is all-powerful, and to pretend that substantive differences that will affect millions of lives are meaningless is even worse.