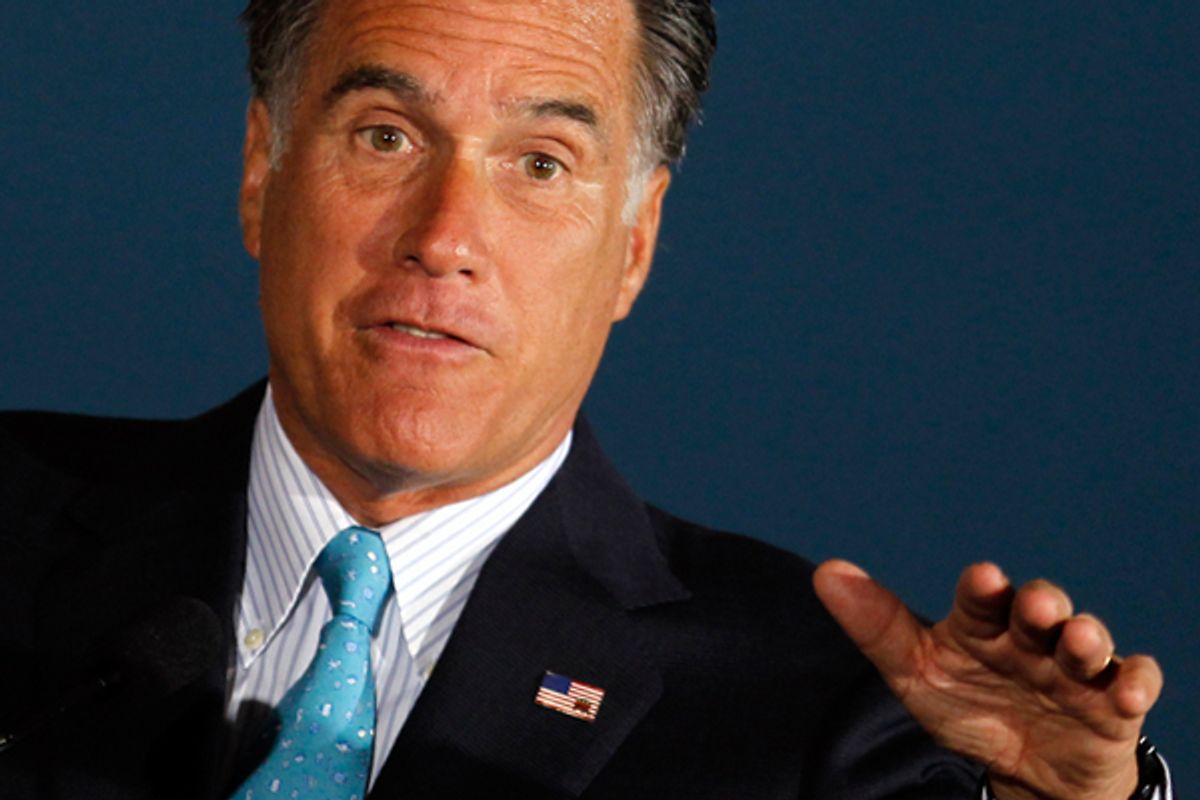 We're going to be seeing a lot of this for the next seven months: Mitt Romney is "overheard" by reporters explaining new details of his economic plan and a million bloggers immediately pull out their calculators and scream "argh!"

Specifically, Romney suggested that he would be able to pay for his planned 20 percent tax cut for everyone by eliminating the mortgage tax deduction for second homes as well as deductions for state and property taxes. Matthew Yglesias, Kevin Drum and James Kwak all quickly pointed out how the numbers don't add up. Romney's tax cut proposals still cut far more revenue than his targeted tax code tweaks add to the ledger. That means that under Romney, without extraordinary, economy-killing government spending cuts, the U.S. federal deficit would balloon even faster than it is now.

The most systematic demolition of Romney's arithmetic comes courtesy of the Atlantic's Matthew O'Brien, who also points out that even though the plan won't work, it still might be considered good politics.

So far, Romney has only shown a willingness to upset a small group: rich people in blue states. After all, state income and property taxes are generally higher in Democratic states than in Republican ones. Ditching the deductibility of these taxes will mostly hurt a minority of voters in states Romney isn't going to win anyway. The politics of it are genius. The economics, not so much.

Again, we're going to be seeing a lot more of this between now and November. But a much more revealing insight into the potential nature of a Mitt Romney presidency came in his offhand comment at the same fundraising event that he might "eliminate" some Washington departments.

"Things like Housing and Urban Development, which my dad was head of, that might not be around later."

There is a case to be made for chopping up HUD, most smartly made here by Josh Barro. But Romney's passing mention of the fact that his father was once secretary of HUD deserves more scrutiny.

HUD was created in 1965 as part of the Great Society program pushed through by Lyndon Johnson. A core part of its mandate, as specified by the Housing and Urban Development Act of 1968 and the Fair Housing Act of 1968, was to address discrimination in housing markets. George Romney, appointed secretary of HUD by Richard Nixon in 1969, took to the job of executing that mandate with great vim and vigor, much to the dismay of the president.

From the context of contemporary Republican concerns, George Romney's perspective on the problems caused by segregation -- specifically, the emergence of affluent white suburbs surrounding poor and heavily minority urban cores -- is eye-opening.

In a speech delivered in January 1970, Romney declared his fervent support for government subsidized housing for poor and minority Americans:

“The most explosive threat to our nation is the confrontation between the poor and the minority groups who are concentrated in the central cities, and the middle income and affluent who live in the surrounding and separate communities. This confrontation is divisive. It is explosive. It must be resolved.”

Romney set about using all the powers of government to achieve surburban integration. Majority white communities that wanted government grants for civic improvements such as new sewer construction were forced to allow the construction of subsidized low-income housing.

As Charles Lamb wrote in "Housing Segregation in Suburban America":

"Romney is remembered not only for his enforcement of the Fair Housing Act, but also for his innovative plans to racially and economically integrate the suburbs ... What was needed then, according to Romney, was equality of results as well as equality of opportunity. The secretary assumed that federal policy should seek to ensure that actual economic and racial integration take place in the suburbs. The time was right to open the suburbs to all, build racially balanced new communities, and make the cities more pleasant places to reside."

The emphasis is mine: equality of results! The phrase jumps out, because it is part of Mitt Romney's core critique of Barack Obama. As Romney declared in a speech in December, Obama's vision of an entitlement society is an expression of his belief "that government should create equal outcomes ... that everyone receives the same or similar rewards, regardless of education, effort, and willingness to take risk. That which is earned by some is redistributed to the others."

Mitt Romney understands what Richard Nixon did: Rich people don't like their wealth being redistributed to the poor. George Romney's efforts caused considered resentment in the white suburbs that he was attempting to integrate and Nixon ended up quashing the Romney agenda. But whatever one thinks of the merits of the elder Romney's plan, one thing seems clear: Sigmund Freud would have a field day with Romney's rejection of the progressive Republicanism of his father and projection of it onto Barack Obama. The father believed in using government's power to directly achieve economic integration, while the son's primary economic agenda is to reduce the tax burden on the wealthy and corporations. The father saw housing policy as a way to reduce racial division. The son wants to get rid of the government department that his father tried to use to achieve that goal.