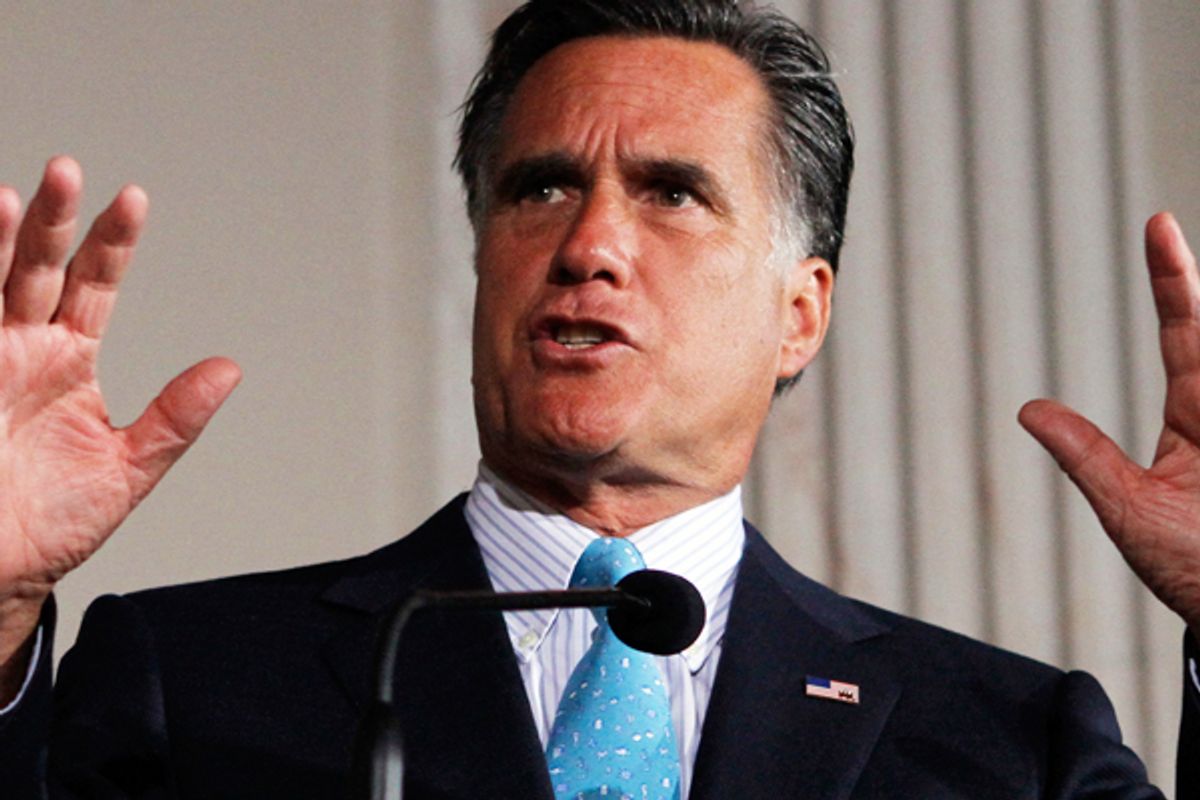 The line of attack on Mitt Romney that Democrats are now pressing seems straightforward enough: He has a "penchant for secrecy," as David Axelrod put it on Monday, that “goes to that question of, like, ‘Who is this guy? What does he stand for? What does he believe? What do we know about him?’”

Certainly, the timing makes sense. This week began with news that Romney – who has accused President Obama of hiding his “real” second term agenda from the public– was far more candid about his policy ideas and campaign strategy with (what was supposed to be) a behind-closed-doors crowd of donors than he’s been with voters.

And today, of course, is Tax Day, the deadline for most Americans to file their forms and send the government any money they owe. Back in January, when he caved to mounting pressure and released his 2010 tax information, Romney promised that he’d put out his 2011 forms “when they’re completed this year in April -- I’ll release my returns in April, and probably for other years as well.” Instead, he’s filed for an extension and his campaign now says he’ll release his 2011 returns sometime in the next six months. And even though he provided 23 years of tax returns to John McCain’s running-mate search team in 2008, Romney seems uninterested in letting the public inspect any of them.

The “secrecy” theme is buttressed by other episodes too, including a column last week from conservative writer Fred Barnes in which an unnamed Romney adviser offered assurances that the candidate’s “private view of immigration isn't as anti-immigrant as he often sounded." There’s also the confusion over Romney’s email practices as governor of Massachusetts. Last month, the AP reported that Romney and his top aides signed up for private email accounts (Romney’s was through Hotmail) through which they conducted official state business. As the AP story noted:

The private e-mail accounts raise questions about why Romney and his aides sometimes bypassed Massachusetts’ official communications system — and how many of those e-mails remain and whether they could be disclosed to the public. Late last year, Romney acknowledged that near the end of his governor’s term in 2007 he approved a sweeping purge of executive e-mails from the state government’s computer servers, and the removal of top aides’ hard drives and computers. Romney justified the purge as legal, prompted by privacy worries.

So it doesn’t seem surprising that a pro-Obama Super PAC put together a four-minute video this week slamming Romney on his tax returns and asking, “What’s Mitt hiding?”; that the DNC has now followed up with a similar video; and that Obama’s campaign pushed the transparency issue in a conference call yesterday afternoon. Romney’s personal unpopularity is already alarmingly high, and this seems like a logical way to try to keep it there.

There are those who see something deeper and darker at work here, though. In the Washington Post, former George W. Bush speechwriter Marc Thiessen acknowledges that Romney handed the Obama team a “gift” with his tax extension, but claims:

The “secrecy” charge is particularly damaging for Romney because it is a clever way for Obama to exploit some Americans’ discomfort with Romney’s Mormon faith without ever raising the issue directly. Recall the outcry last August when a senior Obama adviser declared their intention to highlight the “weirdness factor with Romney.” Team Obama knows many Americans see Mormonism as a “secretive” religion. Calling Romney a “secretive” candidate is a way to tap into those fears without incurring any political blowback.

“These are exactly the kind of questions we asked about Obama in 2008 and were accused of race baiting, or suggesting he was somehow un-American. Now they ask it: What's his secret? It does seem like they are going after the Mormonism, right? I'd do the same thing if I was them. But we were never up on our high horse about better angels and hope and change and all that B.S..”

I have a hard time seeing this. The specific secrecy-based indictments of Romney are basically standard-fare when it comes to political attacks. What campaign wouldn’t go after an opponent who won’t release his taxes, or who gets caught privately revealing controversial policy ideas that he won’t speak about in public, or who goes to elaborate lengths to shield his official communications that should, by the spirit of the law, be part of the public record? In other words, maybe Democrats are going after Romney for his secrecy because … he’s given them so much ammunition to go after him on his secrecy.