23-year-old from Massachusetts outs himself as fan during trial: "I dream of meeting Breivik" 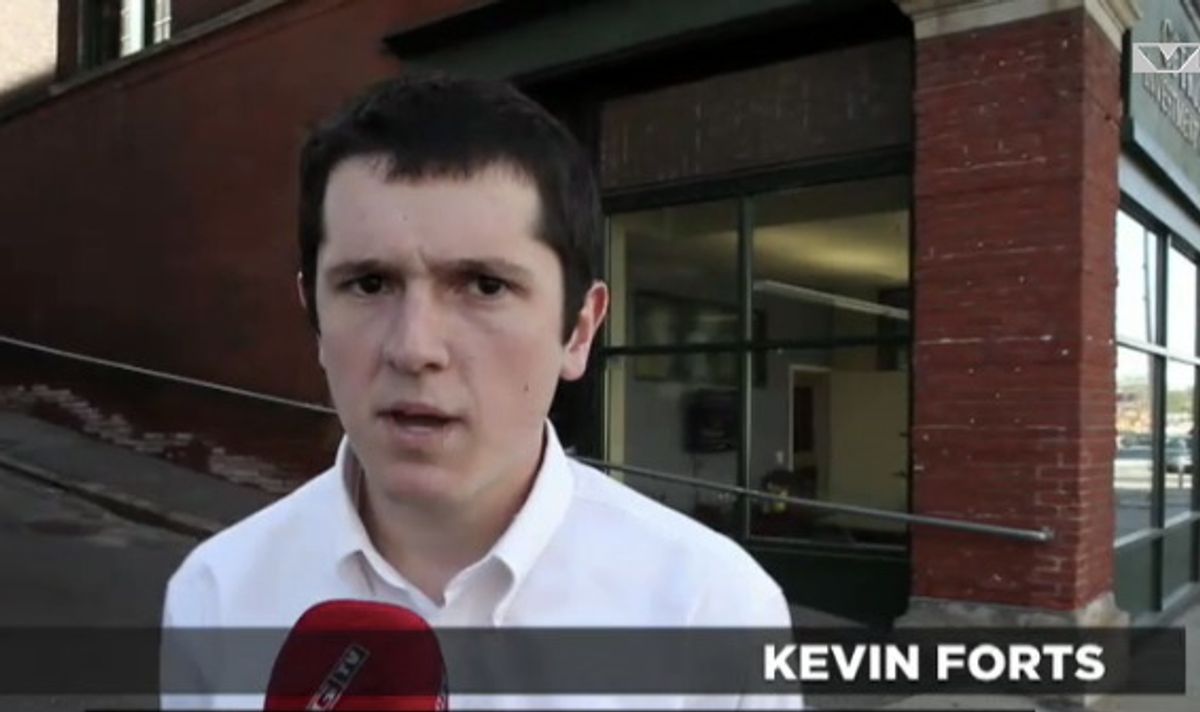 OSLO -- The young man has black hair and a piercing gaze, and poses with his arms behind his back. He wants to appear decisive and courageous for the photographer. His parents and friends have tried to dissuade him from taking this step, says Kevin Forts from Worcester, Mass.. "But I want to, so that I can represent the views of Anders Breivik that have otherwise been demonized by the mass media," the 23-year-old told* reporters from the Norwegian tabloid VG, the country's most-read newspaper.

In a major story the newspaper reveals that Forts shares the views of mass murderer Anders Behring Breivik. "I represent a nationalist alternative, just like Breivik," he says. Forts writes letters to the assassin and exchanges ideas with him. As proof he shows off one letter the mass murderer wrote him from his prison cell.

Breivik praises the somewhat haggard-looking American. VG quotes from the letter Breivik reportedly sent to Forts, in which he writes: "I have received letters from supporters in 20 countries, but you appear to be someone who can write well. Yes, I am absolutely interested in discussing ideological issues with you and am thinking about how we can work together."

It could be a craving for attention that is now pushing the young American into the public eye. Since the attacks of July 22, 2011, the right-wing, anti-Islam scene has largely retreated from the digital public sphere. Its protagonists, who until then had used the Internet for regular exchanges, have rushed to distance themselves from Breivik's acts. Chief among them is Fjordman, a Norwegian blogger, who until the killings had regularly exchanged ideas with Breivik and is considered to be a kind of ideological mentor to him. "It should be painfully obvious by now that Breivik does not care for anything greater than himself," the anti-Islam author wrote in his blog of the ongoing trial this week.

Most are distancing themselves from Breivik, but not Kevin Forts. In a video of the interview posted on the VG website on Wednesday in which he explained why he is defending the murders, Forts said: "I believe it demonstrates a sense of nationalism and a moral conscience. He's fighting against cultural Marxism and the Islamization of Norway and he found that the most rational way to accomplish that was through terrorist actions on Utøya and in Oslo."

When asked how one could defend the murder of inncoent children, Forts added: "Because I believe that he used it as an unprecedented attack. I don't believe that it should occur again, but I do believe that it was atrocious but necessary in that it has raised awareness for it and Breivik did that with the executions."

Forts says he believes Breivik is a "nationalist and a patriot and not the terrorist neo-Nazi that the media portrays him to be." He continues by saying, "Now, all you see is the shock and the gore on Utøya and in Oslo, but you do not see the actual political ramifications that will come true in the future. I believe that, at that point, it will be impossible to hate Breivik, and you will see that he was actually acting in a matter of preemptive war."

Forts' devotion shocks even Breivik himself, who believed that the brutality of his acts had outworn his welcome among his peers.

A Crusader Against Islam

But the motives, at least, of the mass murderer have met with approval in certain radical scenes in Europe and the U.S. "We are witnessing how a second right-wing scene develops," says Daniel Poohl, editor-in-chief of the anti-racist Internet magazine Expo, which was founded by the late Swedish thriller writer Stieg Larsson. Poohl is certain that Breivik's views about the threat of Islam have a large number of sympathizers.

"In the last five years I have observed extremism of two kinds," he says. "First, there are the traditional, organized far-right parties like the NPD in Germany. And there are also extremists, who hate Islam and see the world in danger."

Anders Breivik belongs to the second category. He has boasted that as a "crusader" against Islam, he is fighting immigrants who infiltrate Western nations where they would soon gain power, with support from multiculturalists in the left-leaning parties in government, such as the Labour Party of Norway. Breivik reportedly developed his nationalism during the war in Yugoslavia, where he claims to have known Serbian nationalists who framed the civil war in the former Yugoslavia as a fight between Christianity and Islam.

"Breivik is proof that the anti-Islam movement can radicalize people," says Poohl. "I fear that in the next five years it will come to a head." He says he cannot estimate how big this scene is. As one indication, Poohl points to the comments from Breivik about the degree of sympathy he has received from people.

In the second psychological report on Breivik, Terje Tørrissen, one of the two experts commissioned to determine whether the killer is mentally fit to stand trial, stated that the mass murderer had received more than 100 letters of support from Sweden, Russia, Germany and Britain. "These letters are full of support and they contain the same political views held by the defendant," according to the newspaper VG, which cited the secret reports. Tørrissen quoted Breivik as saying: "I welcome these letters from people who share the same opinion and with whom I can work together in the future."

Talking to the psychiatrist, Breivik enthused about a network of militant nationalists that he wants to operate from his jail cell. Tørrissen reported that the letter writers "use the same language, the same terminology as Breivik. And some say they have been inspired by him and will be more extreme."

During the third day of the trial, Breivik refused to answer detailed questions from public prosecutor Inga Bejer Engh. She had sought to question him about his contacts to other militant nationalists and his supposed Knights Templar network. Breivik is also believed to have met in Liberia with a Serbian nationalist who is wanted on war crimes charges. "I do not wish to comment on Liberia," 33-year-old Breivik said several times. "You'll have to skip it."

During his testimony, Breivik looked exhausted and also a bit resigned. "I hope you will put less weight on ridiculing me and focus more on the issue," he told the court. He said the public prosecutor was merely seeking to sow doubts about the existence of the Knights Templar. The mass murderer said he viewed his 1,500-page manifesto to be a "terror school." He also said one didn't need to be particularly talented to carry out attacks like those conducted in the Oslo government district and on Utøya island.

On the third day of his trial, Breivik found no sympathy from the public, and he can only be certain of a single, unshakable supporter at his side. His American pen pal Kevin Forts provided a quote that has generated angry reactions: "I dream of one day meeting Breivik or talking to him on the phone."

* Full disclosure: Please note that a few of the quotes in this story have been translated from Norwegian into English. Others have been taken directly from video of the interview posted on the VG website.