The controversial Arizona cop is prepping for a possible trial. But already, his closest allies have fallen 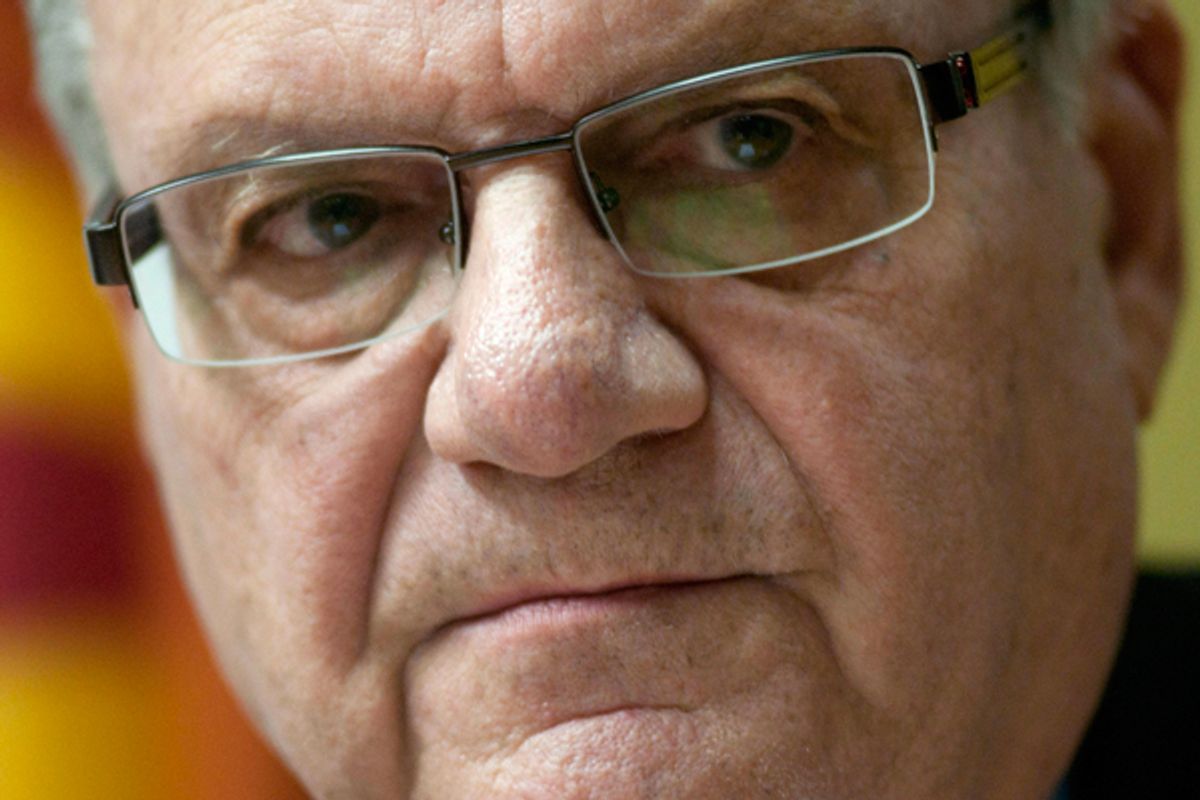 PHOENIX--With fresh calls for Maricopa County Sheriff Joe Arpaio to face a federal criminal trial, many are predicting the end of his controversial career. What few people realize outside metropolitan Phoenix is how much Arpaio’s world has already fallen apart around him.

The latest Arpaio political supporter to fall is former Maricopa County attorney Andrew Thomas, who was disbarred April 10 for engaging in unethical conduct to intimidate and smear his and Arpaio’s political adversaries.

While Thomas, a Republican, has not been criminally charged, the opinion made it crystal clear that his unethical and allegedly illegal conduct was the result of his “unholy collaboration” with Arpaio, also a Republican, to use their law enforcement powers to retaliate against critics.

All three of the criminal cases, filed in 2008 and 2009, were later dismissed for lack of evidence and conflict of interest issues.

The Supreme Court panel’s opinion stated that evidence indicated Arpaio had conspired with Thomas and Aubuchon to file the charges against the judge and two supervisors.

The Thomas disbarment opinion comes at the same time the Department of Justice has been conducting a three-year grand jury criminal investigation into allegations that Arpaio abused his power to go after opponents.  And the federal grand jury criminal investigation is running parallel to a DOJ civil rights violations probe into claims that Arpaio’s deputies routinely targeted Latinos for arrest in an effort to round up and deport illegal immigrants.

Arpaio’s critics are now seizing on the Thomas disbarment opinion to put pressure on DOJ to bring criminal charges against Arpaio, or walk away.

“We draw your attention to the Bar's findings which indicate that Maricopa County Sheriff Joseph M. Arpaio worked in concert to commit the crimes for which Mr. Thomas has, to a degree, been held accountable,” states a letter sent Monday to U.S. Attorney General Eric Holder, signed by four former Arizona elected officials and prosecutors.

“I think it is time to make that decision,” Charlton, who was a George W. Bush appointee, stated in an email. “I have been a vocal critic of Sheriff Arpaio. But there comes a time when an investigation must come to an end. It is appropriate (for) DOJ to go forward now, or explain why it cannot.”

Thomas’ disbarment comes six months after Arpaio’s closest ally in the state Legislature was recalled from office. Angry voters ousted former Senate President Russell Pearce for his leading role in passing Arizona’s controversial immigration law, SB1070. Pearce and Arpaio have a long history of working closely together. Pearce was once Arpaio’s chief deputy and is credited with coming up with the idea 20 years ago of housing thousands of county inmates in tents.

The roundups triggered the DOJ civil-rights investigation of MCSO’s operations that found serious violations outlined in a report released last December. Negotiations between DOJ and MCSO to resolve the civil rights issues broke off last week, and DOJ is widely expected to file a civil suit against the department in the near future.

Behind the scenes, Arpaio has also quietly lost the support of a longtime political ally in Department of Homeland Security Secretary Janet Napolitano. Last December, under pressure from Arizona Republican Sens. John McCain and Jon Kyl, Napolitano terminated an agreement with MCSO that gave the department access to the immigration status of detainees that could lead to their deportation.

In her last days as a U.S. attorney in October 1998, Napolitano signed an agreement with Arpaio that ended a DOJ investigation into jail operations in the wake of several inmate deaths. Arpaio later appeared in a television commercial praising Napolitano during the 2002 gubernatorial election when she narrowly defeated Republican Matt Salmon.

As governor, Napolitano could have shut down Arpaio’s Tent City jails by ordering the state Fire Marshal not to renew waivers of state regulations prohibiting the housing of people in tents beyond six months, but never did.

Arpaio has also lost key support staff within his office, including his longtime chief deputy David Hendershott, who was fired last year for his role in an unfolding Arpaio campaign finance scandal that is the subject of another federal criminal investigation. For years, Hendershott oversaw operations in MCSO and was involved in initiating criminal investigations of Arpaio’s critics, including an Arpaio opponent in the 2004 Republican primary.

The highly publicized fall of Thomas, Pearce and Hendershott, along with eroding support from other powerful politicians such as Napolitano, combined with loud demands for a federal indictment have many believing that Arpaio’s two-decade reign will come to an end.

“We are witnessing the end of the Joe Show,” says prominent Phoenix attorney Michael Manning, who requested a federal civil rights investigation of the sheriff in 2008. “I believe he will be indicted within the next 30 days.”

But even a federal criminal indictment may not work against Arpaio in the upcoming general election, where he is expected to face an independent and Democratic candidates. Despite the steady drumbeat of news reports of serious problems within Arpaio’s sheriff’s office, there hasn’t been a huge public outcry demanding he step down.

“The groundswell of people coming out protesting, we haven’t seen it,” says Randy Parraz, a community activist who led the Russell Pearce recall effort. “It’s a mystery. Anywhere else with this kind of stuff, he wouldn’t survive.”