Sean Hannity to the rescue

Even among Fox News hosts, he stands out for his Republican cheerleading – and he really showed it Wednesday night 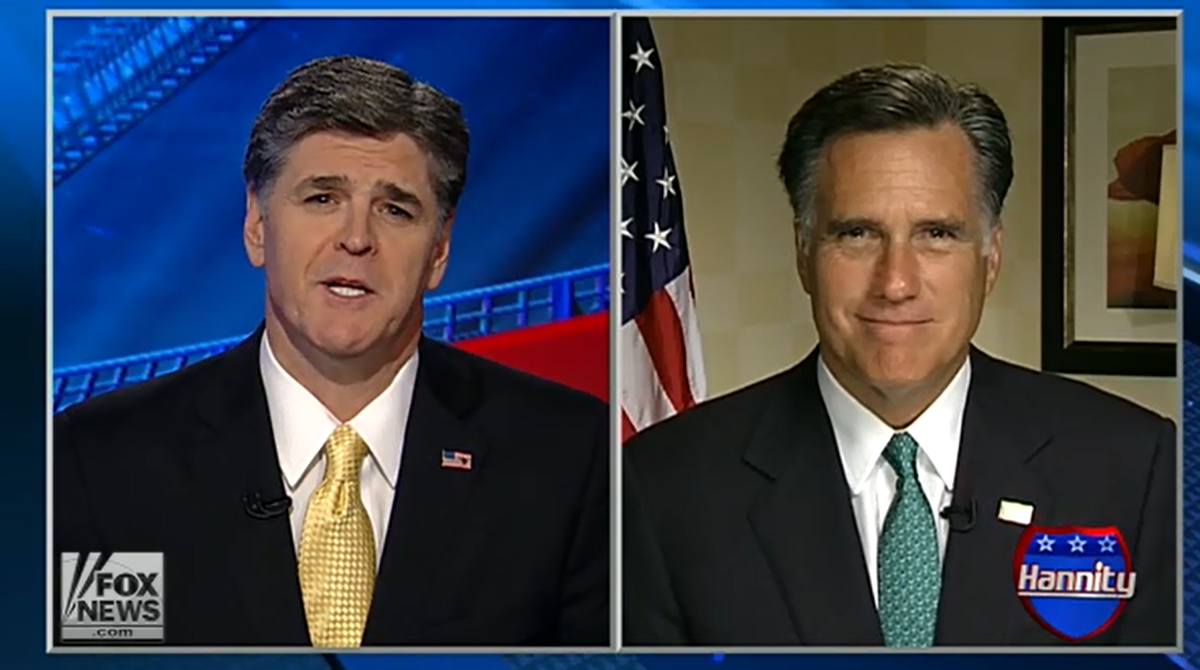 There are two ways of thinking about Mitt Romney’s relationship with the Republican Party’s base and how it will affect the general election.

On the one hand, there is serious doubt among conservatives – particularly white evangelicals – that Romney truly shares their values and can be counted on to pursue them as president. They resisted supporting him through the primary season, even as his inevitability became apparent, and are poised to spend the fall campaign (and a Romney presidency, if it comes to pass) policing his actions and rhetoric for any hint of a sell-out. The need to placate these conservatives could severely complicate any effort by Romney to move toward the middle against Barack Obama.

On the other hand, there are plenty of conservatives who don’t seem to care about much besides beating Obama. They may not have been passionately pro-Romney before, but now that he’s the presumptive GOP nominee they’re not nearly as interested in scrutinizing him as they are in propping him up and scoring points against Obama.

Case in point: Sean Hannity, one of the most prominent and influential voices on the right. He’s also a cheerleader, one who treats virtually any Republican who hews to basic party orthodoxy as a friend and who mainly devotes his Fox News show to vilifying Democrats and the “liberal” media. Even on Fox, Hannity stands out for his lack of interest in asking tough questions to Republicans; not long ago, Bill O’Reilly called Hannity’s 9 P.M. program “a Republican show.”

This makes Hannity the best kind of friend Romney could have right now. And boy did it show last night, when Romney appeared on Hannity’s show. To call what transpired an “interview” is probably an abuse of that term. Really, it was just ten minutes of Hannity stoking his audience’s resentment of Democrats and using false or misleading statistics to set up familiar Romney talking points.

The show began with Hannity cueing up cueing up an anti-Obama Romney campaign video released earlier in the day. When it was over, Hannity introduced Romney, who appeared via satellite, and asked him to “explain why in your mind that ad is powerful.” After wiping the sweat from his brow, Romney launched into his standard attack on Obama’s failed leadership.

Here, word for word, are the questions that Hannity asked for the rest of the segment:

Again, even by Fox’s standards, Hannity is a joke when it comes to grilling Republicans. Other personalities at the channel probably would have asked Romney some real questions. But Hannity is among Fox’s highest-rated hosts, and he’s hardly the only conservative opinion-leader who’s dedicated to using his platform to help the Republican team wins in November. Their willingness to treat Romney the way Hannity did last night could give Romney some badly needed cover this summer and fall, as he looks for ways to appeal to swing voters.