As usual, Katie Roiphe misses the point. Women aren't the only ones who find escape in submission 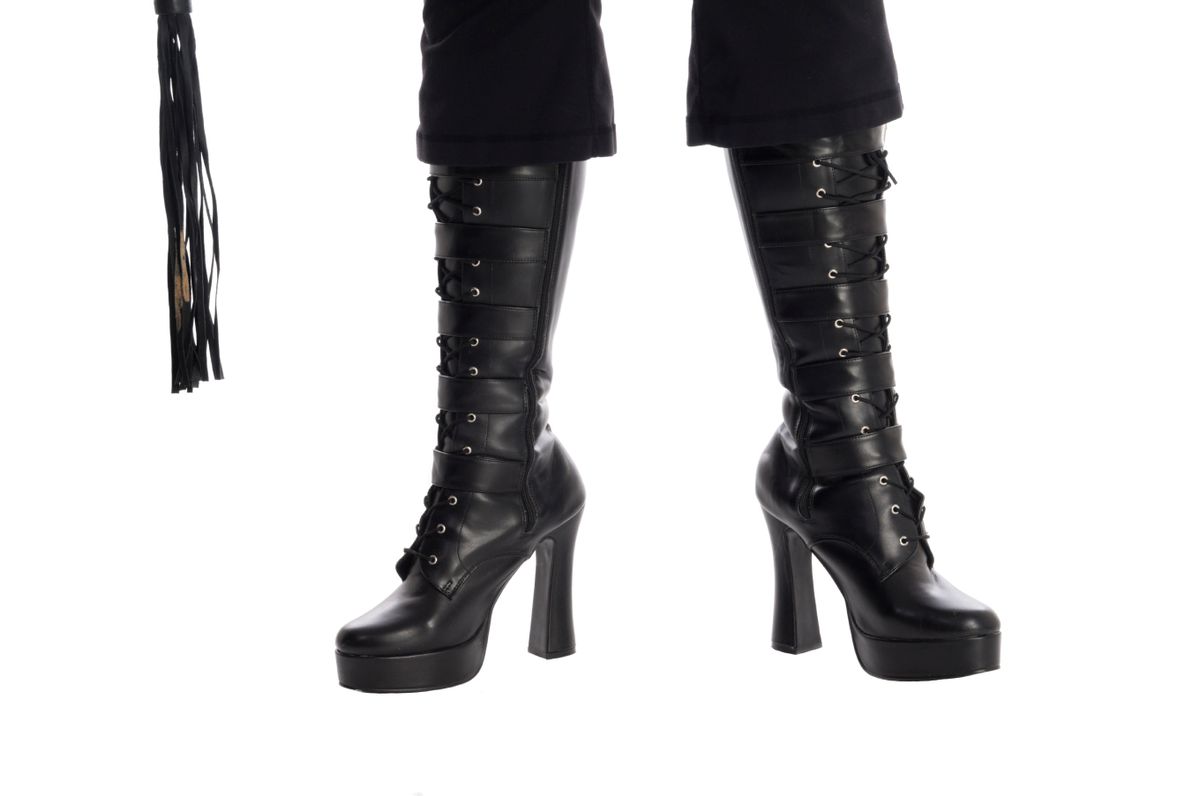 What about men? That was the first thought that came to mind after reading Katie Roiphe's Newsweek cover story on the BDSM-themed "Fifty Shades of Grey" phenomenon, in which she controversially speculated that women's current fascination with the book's story line of female submission was the result of the "pressure of economic participation" and the "hard work" of striving for equality. The desire for submission is hardly something unique to women.

Who understands this better than professional dominatrixes? With so many speculating this week on Roiphe's article, I decided to hand the microphone over to women with a unique perspective on the dynamics in power and play.

Several said that Roiphe is actually on to something when she talks about submission as an escape from life's stresses -- only, this reasonable point is overwritten by her wrongheaded focus on women and the impact of feminism. Roiphe wonders whether there is "something exhausting about the relentless responsibility of a contemporary woman's life ... all that strength and independence and desire and going out into the world," and suggests "that, for some, the more theatrical fantasies of sexual surrender offer a release, a vacation, an escape from the dreariness and hard work of equality." What about the exhausting, relentless responsibility of contemporary people's lives?

Many men who turn to submissive fantasies do so for precisely the sort of vacation from responsibility that Roiphe suggests women are seeking. Olivia Severine, a transsexual dominatrix living in San Francisco, says most of her clients were "very high-powered" men weighed down by responsibility. "They came to see me as a brief escape when no one was looking at them for direction or leadership," she says. "The time with me is when they were told what to do, what to feel and how to act ... and all the weight of their careers, families, lives, is lifted from them for a cherished few hours."

Melissa Febos, author of "Whip Smart," a book about her time as a pro-domme, tells me, "As someone who spent nearly four years catering to the submissive fantasies of men, and who eventually had to acknowledge her own submissive fantasies, I can say with some certainty that I think all people experience anxiety about power," she says. "Aren't our objects of eroticization often the things we feel unreconciled about?"

Most of Febos' clients "experienced an imbalance of power in their lives," she says. For some it was "extreme disempowerment," like child abuse, racism or poverty; for others, it was "an overwhelming burden of power," related to everything from wealth to politics. ("During the Republican convention, business at the dungeon boomed," she says.) All of that is to say that "eroticization stemming from anxiety is not gender-specific," Febos explains -- nor is it specific to the relative power one has in the real world.

"Everyone, regardless of career choice or level of importance, is saddled with the burden of making important decisions about their own lives and the lives of the people around them," Domina Nyx of New York City points out.

While Natasha Strange, who has worked as a domme for almost 20 years, has had plenty of "men who are powerful and want to give up control for a bit," she's also had tons of "musicians, cab drivers, pharmacy reps, teachers and your basic blue-collar workers who are just kinky and want to feel desired for an hour or three." Interestingly enough, she says, "The very first female client I had was a housewife and a mother of two."

As Febos suggested, these desires can arise from disempowerment. While New York-based Maya Midnight has some high-powered clients -- after all, they are the ones most capable of regularly paying for her services -- she says, "I get far more clients who experience loss of power in their day-to-day lives and have fetishized it."

Roiphe's suggestion that women's submission fantasies are indicative of an underlying longing for the way things used to be, pre-feminism, seems particularly questionable when compared to "race play," which Mistress Justine Cross describes in an email as "capitalizing on themes of racism in mainstream society, i.e., degrading a submissive using racial slurs, and redeploying those themes for sexual pleasure." It seems patently absurd to suggest that an African-American man who eroticizes racism has a deep-seated desire for the days before the civil-rights movement. Should it be different when it comes to a woman longing to play-act a "sexist" fantasy?

Often enough, the "roots," as Midnight calls it, of submissive desires can seem rather random: "One client saw a movie when he was a teenager where a woman kicked a man in the balls and has been into ball-busting ever since," she says. "As a child, I got told off for hitting a man in the crotch with my stuffed penguin and now I love hurting balls. Go figure." Sometimes these desires emerge at a young age (dominatrix Cybill Troy tells me, "I have personal slaves as well as clients who showed signs of their interests as young as toddlers ... a 3-year-old with a tendency to crawl into cupboards who grows up to love being caged and contained both physically and mentally, for example"); other times they only surface well into adulthood.

That fantasy has become much more mainstream as the sartorial trappings of BDSM have been adopted by some of pop music's biggest female stars, with Rihanna and Lady Gaga devoting songs to "S&M" and liking it "rough" (as I wrote about in a piece last year headlined, "Is kink the new girl-on-girl kiss?"). "I think there's been a trend toward making the naughty more mainstream; it’s just a modern version of the bodice ripper," says Olivia Vexx of "Fifty Shades of Grey." "[It's acceptable now for] a soccer mom to go buy a bodice and a whip." Strange says, "When I started as a domme, it was near impossible to find thigh-high boots" -- but now she says, "I can go to pretty much any suburban mall." Maybe we're finding more evidence at this cultural moment of women entertaining submission fantasies simply because it's more acceptable.

But even in the worst-case, end-of-times scenario that Roiphe is right and "Fifty Shades of Grey" is so popular because of women's current anxieties about equality (such as it is), that doesn't mean that it's "evidence of unhappiness, or an invalidation of feminism," says Febos. In fact, she suggests that it's "just the opposite" -- it might actually be a sign of progress that millions of women are so hungrily pursuing sexual fantasies independent of men.

Contrary to Roiphe's belief, there are plenty of feminists who are neither "perplexed," as she puts it, by submissive desires nor find it contradictory to their politics. Febos, who considers herself a feminist and also has submissive fantasies, says, "I still live in a culture that floods my consciousness with instructions to be a passive, sexual object; that my only power rests in my sexuality as defined by men's desire," she says. "Mightn't this create some anxiety in my own psyche? I think so. Have I eroticized those messages in order to locate them somewhere that won't impede my progress as an empowered, independent woman in the rest of my life? Maybe so. But so what?"