The rise of the Mormon feminist housewife

Being a stay-at-home mom is still the religion's ideal, but it's no longer reality for many women 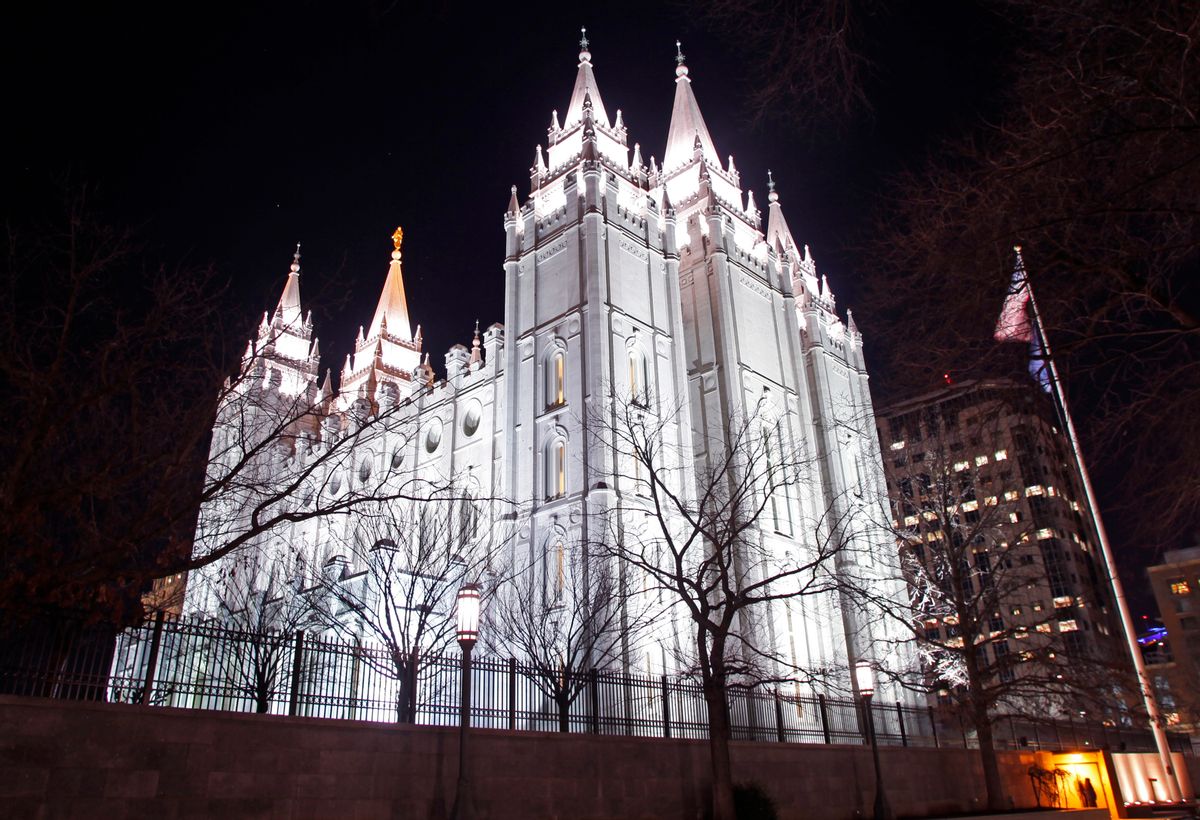 When Democratic talking head Hilary Rosen remarked on CNN last week that Ann Romney hadn’t “worked a day in her life,” Aimee Hickman says her heart sank. “I thought, wow, Ann Romney is going to be on the Internet in 20 seconds – and in fact she was – because if there’s one thing that Mormon women are trained to do, they are trained to defend stay-at-home mothers.”

As McKay Coppins explained at Buzzfeed, “[F]or many Latter-day Saint women, staying at home to raise children is less a lifestyle choice than religious one — a divinely-appreciated sacrifice that brings with it blessings, empowerment, and spiritual prestige.” And yet Ann Romney’s position, for all the outrage it produced, doesn't reflect all Mormon women's realities. A growing group of young Mormon women, like Hickman -- who calls herself a stay-at-home mom, but co-edits the feminist journal Exponent II, runs a stained-glass studio and is writing an academic paper about Mormon women opening Etsy stores -- are increasingly challenging women's traditional role within the Church. Though Mormon women are still more likely to be stay-at-home moms, several Mormon women active in feminist issues said that in their wards, roughly half of women work outside the home. Even more surprisingly, rather than shunning these women, as it did as recently as the 1990s, the Church is showing some signs of a new tolerance toward them.

“In a congregation 15 years ago, anyone could have told you which women were employed outside their home and which ones weren’t,” says Kristine Haglund, editor of the liberal Mormon journal Dialogue. That’s no longer the case, she says, partly out of economic necessity, and because young women “didn’t grow up with the sense that there was something inherently wicked about women participating in public life.”

Though Mormon feminists first began organizing in the the 1970s in more liberal congregations – most prominently in Mitt Romney’s own Belmont, Mass., ward, a movement Ann Romney sat out – the backlash was severe. The 1987 sermon by Mormon prophet Ezra Taft Benson that counseled Mormon women to quit their jobs and affirmed childbearing and rearing as women’s primary role was “devastating,” says Tresa Edmunds, co-founder of the Mormon feminist group WAVE (Women Advocating for Voice and Equality). “Women quit their jobs at great financial sacrifice. Some were heartbroken to do so.” Five years later, the high-profile excommunication of six Mormon intellectuals, mostly feminists, chilled internal debate for the following decade. Haglund, 42, calls it a “missing generation” of women who felt forced to choose between feminism and Mormonism, and often left the church as a result.

Recently, however, the Church has been much more hands-off with women who don't fit the mold of stay-at-home-mom. Its new ad campaign, a response to negative perceptions reflected in polls, “I’m a Mormon,” includes several female professionals outside of the “housewife” mold, a sign the church at least wants to present such women to the world as Mormons.

When Lisa Butterworth started Feminist Mormon Housewives in 2004, writing under her own name to debate often-taboo questions, she worried about being called into a church court. It never happened, even as the site grew to a dozen regular bloggers. “I know personally most of the people that were excommunicated in the '90s and I’ve read the things they wrote,” she told Salon. “Pretty much everything that got them excommunicated has been said on the Internet 50 times and not a soul has been excommunicated.”

“There’s the sense that they can’t control it anymore, that the Internet makes it impossible to round everyone up,” Haglund says.

Economic possibilities on the Internet -- those Etsy stores and monetizing the now-famous Mormon craft, fashion and food blogging -- have also helped blur the line between “stay-at-home mom” and “working mom.” And since Mormon congregations are organized by region rather than by affinity or ideology, the Internet has filled the vacuum for liberals, including feminists, to grapple with their faith and gender roles – while, in many cases, staying within the church. Hickman suggested that the church is aware of high rates of departure, including among young women, though official numbers are kept private. Many Mormon feminists interviewed said their views were tolerated, if not warmly embraced, within their real-life communities.

Work-life issues aren’t the only ones Mormon feminists care about – they’re also rallying for acceptance of gay and lesbian Mormons, and trying to change the way female modesty and sexuality are discussed. And they still come up against the expectation, formal and informal, that Mormon women fully devote themselves to their children. When Hickman worked two days a week outside the home, her church’s nursery school leader told her husband that she thought their son’s behavioral issues were attributable to his mother’s absence. When her husband pointed out that those were the days he was with their son, she replied that it was contrary to the “natural order.” And while there is no official policy on the books, it’s widely understood that the Church and its affiliates won’t employ women with young children.

The Church has pointed out in its defense that women do hold some prominent positions in the religious structure, but critics counter that only ones that are subordinate to men. Mitt Romney, who was active in church leadership, would have been no exception -- and for him, says Haglund, that held true outside the church as well. “[Romney] has never been in a position either in his work life or his church life where he had to defer to the opinion of a woman, ever,” she says.

Like many feminists in faith communities, Mormon feminists are sensitive to any suggestion from their secular counterparts that they're brainwashed or that they should just leave the Church. They see plenty of room for women within their religious doctrines, if not in current institutional practice. “Some of the quirky aspects, like our 'weird underwear' and 'becoming gods,' are thrown out in the press,” says Emily Clyde Curtis, co-editor with Hickman of Exponent II. “But there are very feminist aspects of our theology that other Christian denominations don’t have ... the very powerful history of Mormon women that showed that this is a group that has not been submissive is lost. Utah was one of the first states to grant women suffrage. That’s from the Mormons.” She added that polygamist women of the 19th century were often trained in obstetrics and midwifery – partly because their sister wives provided “free, accessible childcare.” Other women point to the focus on personal revelation and free agency, and especially to the concept of a heavenly mother alongside the heavenly father.

Some Mormon feminists say they've gotten involved in mainstream feminist causes -- like the recent attempt to revive the Equal Rights Amendment -- though there are still major issues, like abortion, on which even the most liberal Mormon feminists tend to be more conservative. (Though the LDS church opposes abortion in most cases, it does make exceptions for the health and life of the mother or if the fetus is non-viable.)

Family planning is generally a complex topic: There is no doctrinal prohibition on birth control in Mormonism, but the cultural pressure to have many children remains, and non-medically indicated contraception isn’t covered under the insurance plan offered to employees of the LDS church and educational arms like Brigham Young University. As Romney took the standard Republican line on the campaign trail that mandating contraceptive overage was a violation of religious freedom, Mormons stayed out of the fray. But many were philosophically sympathetic to the idea of religious conscience and government regulation -- because of the formal hostility to gay marriage.

“Contraception isn’t a big deal for the church, but they’ve jumped onto the religious freedom bandwagon in anticipation of a battle over gay marriage,” says Haglund. She was among several Mormon feminists who questioned the lack of birth control coverage, which may change under the new Obama guidelines, depending on whether the church applies for a religious exemption.

Ordaining women as priests remains one of the deepest fault lines -- for example, WAVE does not officially advocate for women to be recognized as priests, which Edmunds refers to as an "electric fence." Haglund says, “‘We’re not arguing for women’s ordination, but ...’ is the Mormon equivalent of 'I’m not a feminist, but ...'”

For now, feminists continue to press their case from within, seeing limited but real causes for optimism. Says Edmunds, “I feel personally called to do this. We have every reason, including historical precedent, to believe that further changes will come when God deems us ready for them, or when leaders are ready for them. Who knows what the mix will be?”