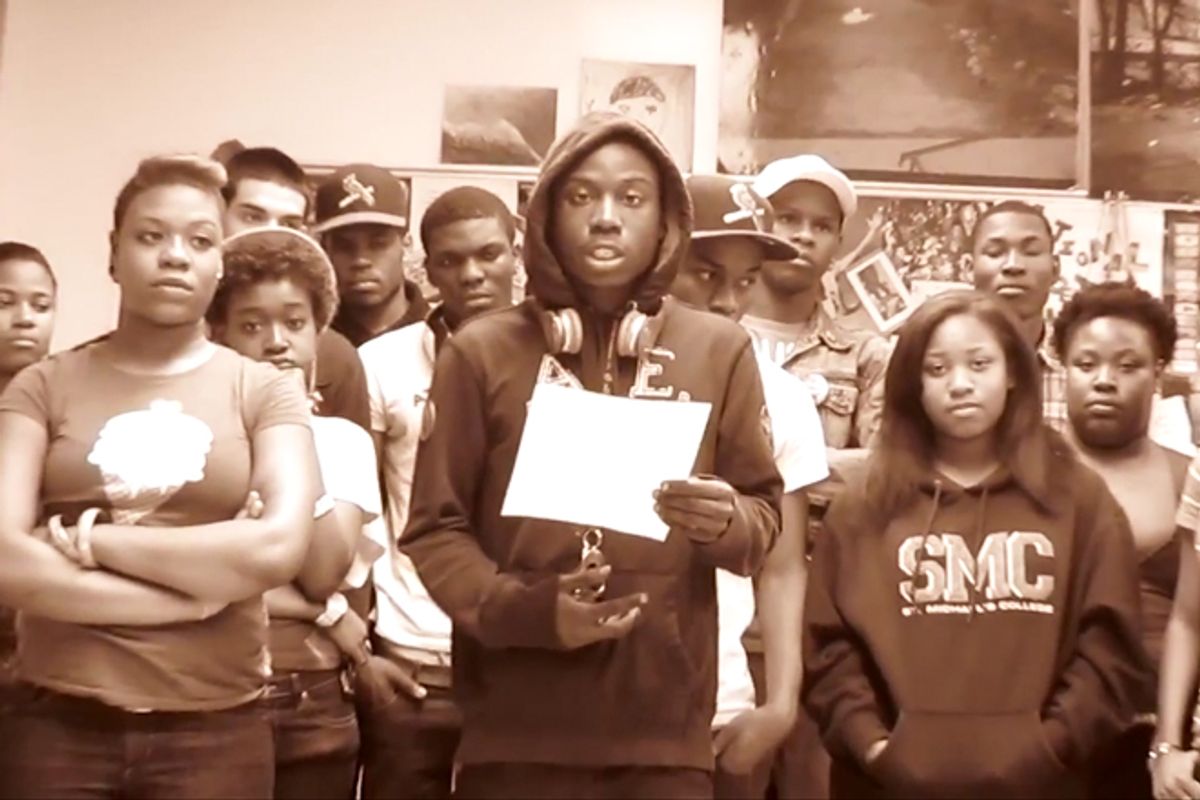 In a short video released last week, a group of students from New York's Paul Robeson High School stand in an unremarkable classroom: school bags slung over wooden chairs and busy pinboards in the background. Their message, however, is a radical one: at front and center of the shot, a young man holding a white sheet of paper announces a mass high school student walkout on May 1, the day of the Occupy-planned general strike.

"Dear New York City. We the students of public education are here to inform you of the injustice that is taking place in our school system," he begins, surrounded by members of the school's student leadership, some staring defiantly into the camera with arms crossed. After listing student grievances including the privatization of the public school system, budget cuts, school closures against community wishes and over-policing in schools, the young man announces the May Day walkout to nearby Fort Greene park in Brooklyn.

It would be easy to dismiss high-schoolers' plans to participate in May Day actions -- which included calls for "No School" alongside those of "No Work" -- as an excuse to skip class. But the video from Paul Robeson High shows a politically aware and angry student body, which is keenly drawing connections between educational policy and broader political issues -- most notably the production of racist systems. Their announcement connects the criminalization of schoolchildren to the institutionalized racism displayed in the case of Trayvon Martin's killing.

"We believe that trying to control our schools is just another symptom of the blatant racism in our country similar to the government’s response to the senseless killing of Trayvon Martin," the young man reads from the walkout announcement, while symbolically pulling up his hood over his head, referencing the hoodie marches in response to Martin's murder.

Combined with a college student population fighting back against budget cuts, fee hikes and crippling student debt, these high school students are an indication that today's young adults -- cresting the Occupy zeitgeist and facing precarious futures -- are fast becoming a political force with a taste for direct action.

Students from Paul Robeson and several other large high schools facing closure under New York Mayor Michael Bloomberg's education administration (which has seen 140 struggling schools shuttered since 2003) participated in a protest walkout and converged with Occupy supporters in February. Indeed, across the country protests organized under banner of Occupy the Department of Education have brought students, teachers, parents and allies together to speak out against growing school privatization (much of which has been based on model legislation from right-wing policy group and Occupy bête noire, ALEC). The walkout tactic in particular was also recently employed in South Florida, when hundreds of young people left their classrooms in a coordinated protest to demand the arrest of Trayvon Martin's killer, George Zimmerman.

The importance of young students autonomously organizing against perceived injustices -- be they overbearing cellphone policies to heavy police presence in schools -- should not be underestimated. Kids not yet of college age are prepared to act in defiance of institutions they see as oppressive; their anger comes from a place not of empty youthful rebellion but an awareness (far belying their years) of the harms of privatization and systematic racism. Only recently, as writer Alexander Zaitchik pointed out this week in Salon, has the student debt crisis and the corruption behind it become a front for protest in this country. Meanwhile, in Quebec, currently more than 165,000 college students are on strike (this from a total student body of 495,000) -- an underreported student strike against proposed fee hikes that is now in its third month.

College student protest is nothing new, but has often in history been quixotic and merely a passing phase for campus dwellers -- "radical until graduation" as the saying goes. But now college graduates entering a world of underemployment and precarity no longer see radical political action as the preserve of students. And now, it seems, we can add a growing number of high school students to these ranks of the politicized and radicalized. As the student leaders from Paul Robeson High note, the May Day walkout is just their "first action" against injustice.