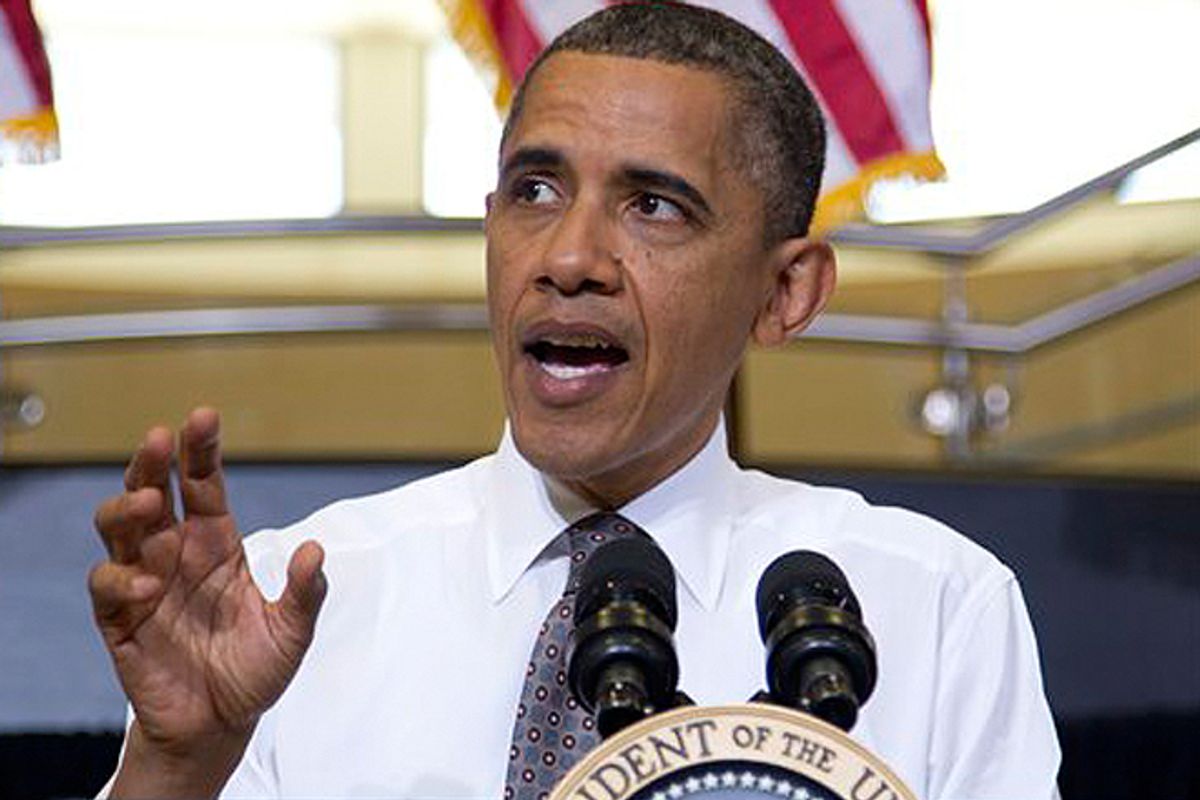 Anyone hoping that President Obama will finish “evolving” and announce his support for gay marriage this year might want to look at what’s unfolding in North Carolina right now.

On May 8, voters there will be asked to decide whether to amend the state’s constitution to ban not just gay marriage but also civil unions. This would represent a serious step back for the marriage equality movement, and polls show that Amendment One, as the proposed ban is known, would pass if the vote were held today. Last month, Obama’s campaign released a statement expressing his opposition to the amendment, but he didn't say anything about it during his visit to the state today, sticking instead to his script on student loans.

A good case can be made that Obama is seriously hurting the campaign to defeat Amendment One with his silence. For one thing, there are signs that many North Carolina voters aren’t engaged in – or even aware of – the referendum battle. And since it will be settled in the state’s primary election, and not in November, turnout could be low. So there might be real value in Obama speaking out and drawing attention to what’s at stake in two weeks.

Beyond that, the president could be of particularly help with two particular groups of voters: Young people and African-Americans.

The newest data from PPP explains why. Overall, PPP found, Amendment One is favored by voters, 54 to 40 percent. Every age group supports its passage, except those between 18 and 29 years old, who are against it by a 62-31 percent spread. This is consistent with national polling, which has consistently found that young voters are by far the most progressive on gay marriage. The question is how many young voters will turn out on May 8; if Obama (who is also more popular with the 18-to-29 crowd than with other age groups) were to raise his voice, this number might spike.

African-Americans, on the other hand, now favor Amendment One by 51-39 percent. This actually represents a pronounced shift from last month, when PPP measured black support for the ban at 61 percent. For Amendment One to fail, this number needs to keep falling, something Obama could encourage by speaking out.

There’s another side to this, though. If Obama were to enter the fray, it could turn the May 8 vote into a referendum on the president, allowing Amendment One supporters to scream about White House meddling and encouraging swing voters who aren’t thrilled with Obama to express their disapproval by voting “yes.”

From Obama’s reelection angle, it’s also a mixed bag. Sure, by speaking out, he’d probably energize many of the young voters who’ve soured on him since ’08; this is one of the reasons for his student loan push. But how many older swing voters who aren’t comfortable with gay marriage would he turn off? It’s true that Amendment One is about far more than gay marriage, but that doesn’t mean voters will understand it that way. Obama’s winning margin over John McCain in North Carolina in 2008 was microscopic – less than half a point, or about 14,000 votes. And that was under optimal conditions for a Democratic presidential candidate.

Support for Amendment One seems to be slipping. According to PPP, the more voters hear about it, the less comfortable they are with it. So it may still be defeated, even with Obama largely on the sidelines. Still, if the politics of 2012 make him unwilling to forcefully speak out against a regressive effort to ban civil unions, then it’s hard to believe he’ll be comfortable taking a progressive stand for marriage equality any time soon.