I\'ve been listening to one album obsessively for an entire year. Only one man could explain: The lead singer 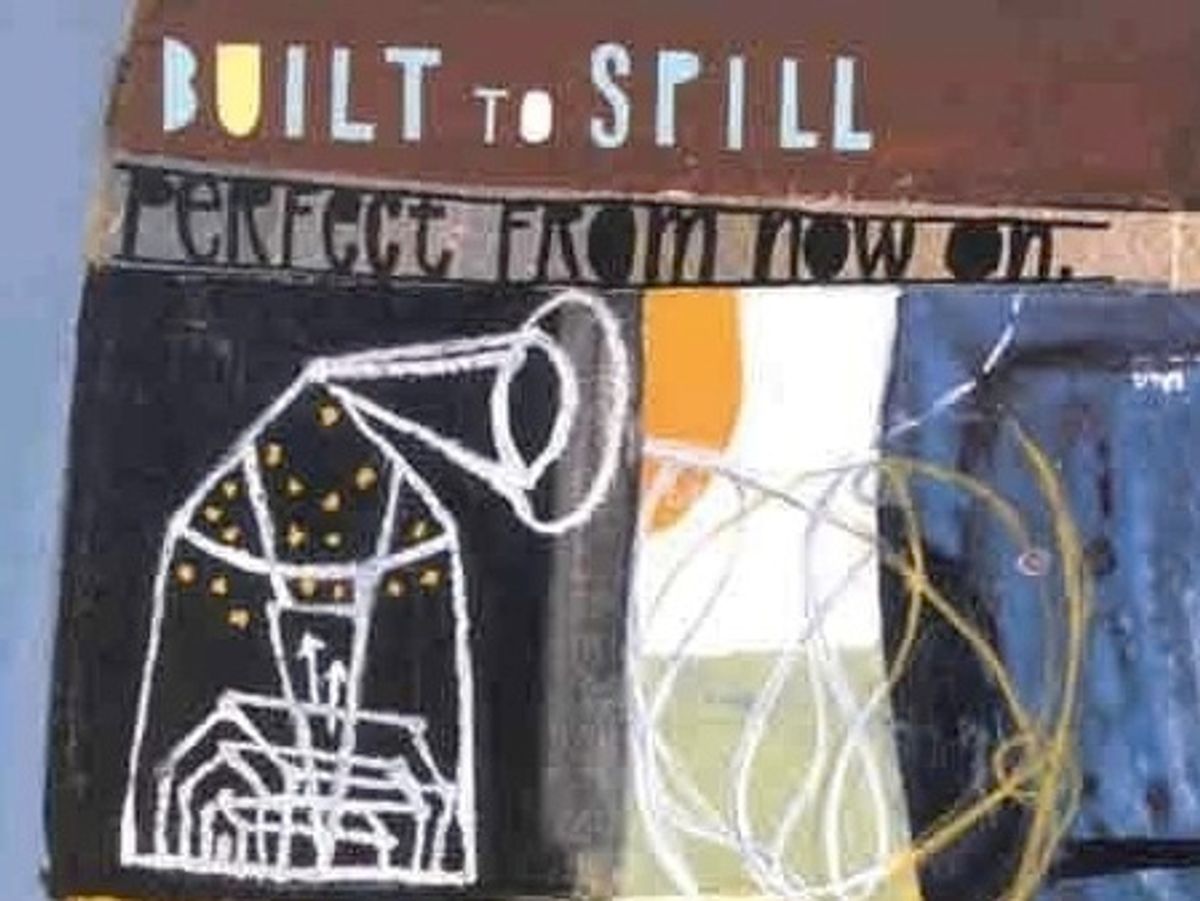 On my computer, the play count for the song “Randy Described Eternity” is 406. But I’ve also listened to it in my car, on the subway and on YouTube. The song is from the 1997 Built to Spill album “Perfect From Now On,” which turns 15 this year. And apart from playing a few other Built to Spill records for variety (lately “You in Reverse,” previously “Keep It Like a Secret,” frequently “There Is No Enemy”), I haven’t voluntarily listened to anything besides “Perfect From Now On” since May 2011.

What’s wrong with me?

Like many music connoisseurs whose tastes were forged in the ‘90s, I’ve long admired Built to Spill, the rare rock band that’s spent its entire career basking in the adulation of critics and fans. The New York Times once compared singer/guitarist/founder Doug Martsch to Jimi Hendrix and Eric Clapton. The band’s devotion is deserved. Even as its members settle comfortably into middle age, Built to Spill remains emblematic of a certain post-adolescent longing. Their sound is catchy, twisty and inventive, and their lyrics burst with wit and humanity. There’s every reason to like them if you like complex arrangements and blistering solos. (And if you don’t, who needs you?)

What I wonder, though, is why my devotion evolved into full-bore obsession. I mean: 406 times. Am I suffering from some psychological malady? Some neurological tic? Perhaps that sounds hysterical, but my family tree has borne a veritable bushel of obsessive, compulsive, biologically quirky fruit. And my need to listen to this band upward of three times a day approaches a kind of addictive behavior: I’ve blown off deadlines to listen to them, I’ve violated FAA takeoff regulations to listen to them, I’ve irritated my spouse and become physically uncomfortable when I can’t listen to them. It worries me. One night on my evening commute back to the Bronx, I tried to go cold turkey without the song. I lasted six subway stops before I fell off the wagon. (I imagine people at my funeral: “How’d she die?” “Built to Spill overdose,” they’ll say.) So, will I really be listening only to “Perfect From Now On” … from now on? And if so, why?

I pick up Dr. Daniel J. Levitin’s fascinating book, “This Is Your Brain on Music,” in which he describes the phenomenon of “earworms,” or songs that stick in your head. Built to Spill is stuck in my head, for sure; the difference between me and the case studies Levitin describes is that I’m OK with it – as opposed to the helpless frustration others feel when they can’t stop singing, say, the Black Eyed Peas’ “Let’s Get It Started.” Still, the earworm theory seems applicable. “Our best explanation,” Levitin writes, “is that the neural circuits representing a song get stuck in ‘playback mode’ … it is rarely an entire song that gets stuck, but rather a piece.”

It’s true that I often turn to this album because some brief moment of it is drilling through my mind. In “Randy Described Eternity,” I can hear the opening with its clean, quiet guitar, which peals out two alternating notes in a cadence reminiscent of a car alarm. I can hear another guitar entering, descending mournfully and then repeating, like the melody is crumbling and rebuilding itself. Most of Built to Spill’s albums are composed of disparate chunks like these, expertly stitched together.

Levitin also confirms a relationship between earworms and obsessive-compulsive disorder: “In some cases medications for OCD can minimize the effects,” he writes. To shed some light on the OCD question, I make my way to that most trusted of diagnostic tools: the Internet quiz. Am I plagued with the fear that I might accidentally harm my family members? No. Do I have excessive religious thoughts? No. Do I worry that I might be infected with a disease? Well, just OCD. After six questionnaires — including the industry standard Yale-Brown (Y-BOCS) Obsessive Compulsive Scale — give me a relatively clean bill of health, I finally relax.

If my fixation isn’t neurological, maybe it’s psychological. This record makes me feel so much — joy, pain, amusement, nostalgia for a bygone time. Perhaps this last one is key. Built to Spill’s recent albums are fantastic, but I’ve chosen to fixate on one that sounds distinctly like the ‘90s, a time before the specter of terrorism, when TV’s only reality show aimed to teach people tolerance (I refer, of course, to “The Real World”). Maybe this is happening because I’m about to turn 30; there’s nothing like a milestone birthday to send one into a thumb-sucking state of regression. Maybe it’s significant that May 2011, the month this insanity began, was the same month I published my first novel, an anxiety-provoking time. Maybe it’s as simple as this: Adulthood is often terrifying, and “Perfect From Now On” is a cozy escape to my teenage years, when I would lie in bed with a Discman and listen to this band through foam headphones, Doug Martsch’s voice in my ear like he was speaking solely to me.

Trying to identify the root of my behavior, there is one more source I have in mind. So one night, while wandering Built to Spill’s rather unkempt website, I dash off an interview request. I didn’t really think it would work. When a nice woman from Warner Bros. emails to arrange the call, I’m beset with cold sweats. I have no idea what to ask. Or what I hope to accomplish. But then I finally hear his voice on the call, actually talking to me alone: Doug Martsch.

“I am fucking loving this,” he says, once I’ve explained my situation. “What is it you’re listening to?”

When I tell him, his voice deflates. Wrong answer, I guess. I ask which record is his favorite.

“The last two are listenable,” he says. “The earlier stuff I can’t deal with.”

“It’s just not my cup of tea. I listened to ‘Perfect From Now On’ a few years ago and couldn’t get through it. The singing is too precious.”

“So when I said I love that record, did you judge me?”

“Of course,” he jokes. “I thought you had really bad taste.” He’s so nice and down-to-earth, I forget to be nervous. “You know, I have no idea what you hear when you put on a Built to Spill record. I have no idea how you relate to it, what it means to you, what it sounds like at all.”

“Not really,” he says. “My method is to savor things. If I’m obsessed with a song, I’ll put it away. And then I’ll be like, Oh, that’ll be nice when my iPod chooses that song.”

“Do you think it’s a good idea to meet your idols?” I ask.

“Have you ever had a memorable experience meeting a fan?”

“Not really,” he says. “Most Built to Spill fans aren’t all that rabid. Except you. If I ever get that question again, you’ll be the answer.”

After we hang up, I email him my address, since he’s offered to send recordings of his old punk outfit, the Treepeople, and the covers record he and some friends made under the name Boise Cover Band, “so you never have to listen to anything else again,” he says. I take the subway home, and as usual, pull out my iPod and press play in the same spot. Not even Martsch’s own distaste for his album is enough to sour my devotion to it.

A week later, a package arrives. Along with the two CDs, there’s a note that begins, “Hope I didn’t tease you too much,” and ends, “♥ Doug.” (Reader, I framed it.) My husband and I play Treepeople and experience an echo of the not unpleasant psychic agita that punk rock inspired in us in high school, when we came by our angst more honestly. The album is fresh and immediate. Then we try Boise Cover Band’s “Unoriginal Artists,” a collection of obscure R&B, spacey ballads, and such classics as the Pretenders’ “Back on the Chain Gang” and Bowie’s “Ashes to Ashes,” all rendered with care and consistency in tender Martsch-ese. But there’s a moment during the song “I Love You More” when Martsch goes into panty-dropping doo-wop mode — “My pretty baby,” he wails, “my little darlin’…” — that makes me audibly gasp. This is swoon music. I feel the same vertiginous sensation I experienced the first time I ate a soft shell crab, or saw a Coen brothers film, or met my husband — an “I think this is the beginning of a beautiful friendship” feeling.

Weeks pass. I don’t touch “Perfect From Now On.” The play count for “Unoriginal Artists” is 76 (though ask me again in an hour), but it seems something has shaken me from my mania. A friend recommends St. Vincent, and I give her a listen; a bookstore where I’m shopping plays Hall and Oates, and I get deep into it; one morning I revisit Animal Collective’s “Strawberry Jam” and feel like I’ve been asleep for a hundred years.

Then again, “Unoriginal Artists” is playing as I type, as it has been for most of the day. I listened to Treepeople in the car last Saturday and bought their other albums. I also bought (and adore) Martsch’s solo album, “Now You Know.” When I learned recently that Built to Spill would be touring again after a hiatus, I scrambled to buy tickets; when I read that they’d likely release an album this year or next, I leapt for joy.

I’ve abandoned the worry that there’s something wrong with my brain or my psyche. As best as I can figure, the absurd adage that we each have a soul mate is actually true — except not about people, just music. Maybe I’m just lucky enough to have found the songs that are the most in tune with who I am and what I want to feel and they happen to come from the same artist. However monogamous my musical taste has become, maybe the lesson here is simply that — to invoke the title of another of Doug Martsch’s fine records — there’s nothing wrong with love.