A vote for Mitt may also be a vote for his sons' political futures. Are the Romneys the new Bushes? 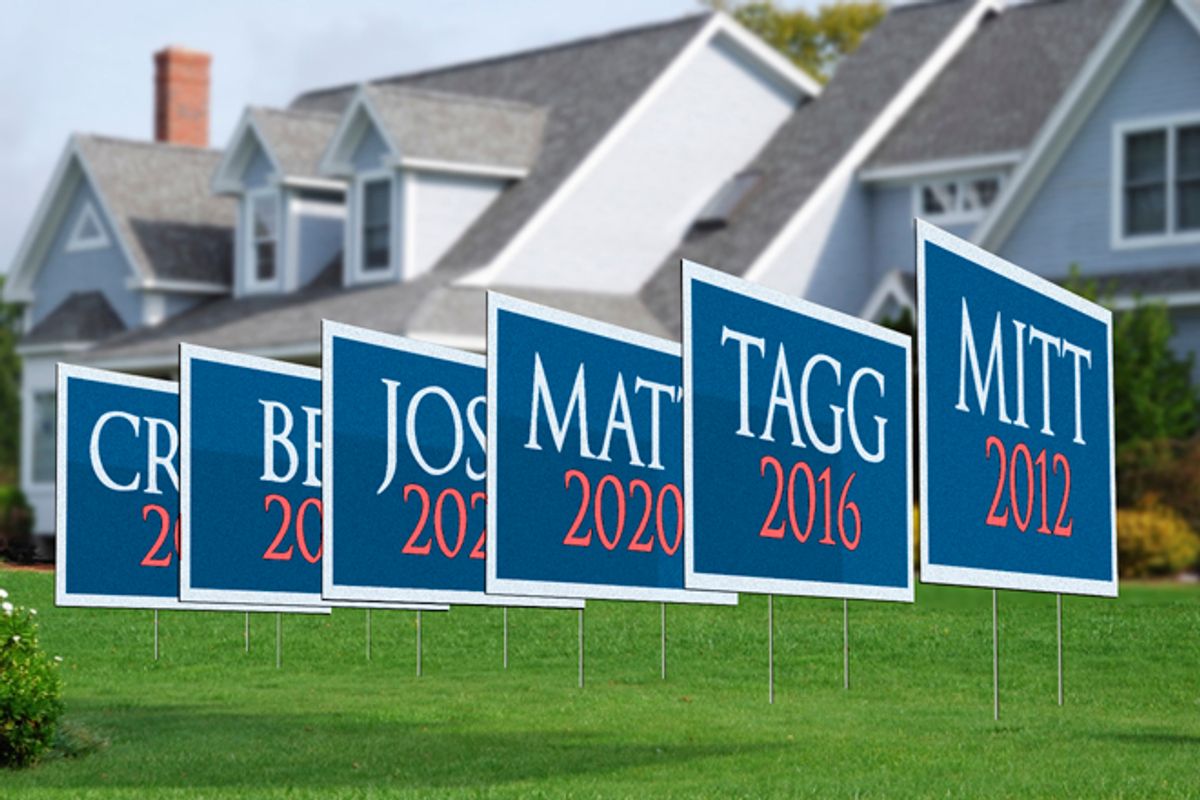 The last time that America elected a stiff Ivy Leaguer with a brood of sons to the presidency, we ended up, some years later, with one of those sons — George W. Bush — in the White House. Like Bush the Elder, Mitt Romney has among his pack of prank-happy boys a couple of offspring with political ambitions. And if Romney wins the race for the presidency this November, there’s a very real possibility that American politics will be stuck with (or, depending on your perspective, blessed by) a Romney dynasty for years to come.

In hindsight, it seems self-evident that, even back in 1988, George W. and Jeb were the two Bush sons to watch. George had already run for Congress once, and Jeb had logged a few years as chairman of the Dade County Republican Party. But during their father’s presidential campaign, it would have been easy to confuse either with another of the four strapping Bush boys. (George W. isn’t the only one with particularly prominent ears.) The five Romney boys might share the same dark-haired athletic mien and make media appearances en masse, but like the Bushes, only two — Tagg and Josh — have expressed a particular interest in politics. Josh, the middle son, has dabbled in Utah politics, seeing his name bandied about in 2009 as a possible candidate for lieutenant governor and serving as an economic advisor to Gov. Gary Herbert. Eldest son Tagg, like George W., has taken time off from business to work on his father’s senatorial, gubernatorial and presidential campaigns. If they haven’t racked up quite the same experience as the Bush boys, they may just be following the dictum that grandpa George — a Michigan governor and one-time presidential hopeful — passed down to Mitt: Politics comes only after kids and career.

Political dynasties fit a bit awkwardly into American politics. We may not believe in permanent royal lines, but we’re suckers for name brands. A politically powerful lineage may not guarantee a brilliant political career, but it can help launch one. “Your name buys you something, but once you're there, you're on your own,” says the Brookings Institution’s Stephen Hess, who’s been keeping tabs on America’s political dynasties since the 1960s. But he notes the higher the office the previous generation attains, the higher the office the next generation can start in. If Mitt Romney had retired from politics after his stint as governor, Tagg might have worked his way into a state Senate seat without much trouble. If his dad becomes president, Tagg has that much greater a chance of starting out as a member of Congress or a governor himself.

If the Romney boys are intent on going into politics, they’re making the right moves. Dynasties need to spread out to maximize their potential for success: Massachusetts, for instance, became too small for the Kennedys, and successive generations colonized Rhode Island and New York. The Romney boys have already divided up the most politically fertile territory available to them. Tagg has staked out the family seat in Boston, while Josh has settled in Utah, where his father considered a gubernatorial run and oversaw the Olympics. (Two of the remaining five brothers now live in San Diego, Calif., and although Ben, the last brother, also lives in Boston, he’s shown the least interest in politics among the lot.)

It’s hard to know, at this point, what type of politicians Tagg or Josh might develop into. As a group, the Romney family projects the very image of wholesomeness. Tagg loves baseball: He worked as chief marketing officer for the Los Angeles Dodgers before joining the Romney campaign in 2008, and he speaks with schoolboy glee about that job. And during the last campaign, Josh gamely took on the task of visiting all 99 counties in Iowa in an old camper bus after his mom volunteered him for the job at a campaign event.

But listening to George W. talking, back in 1988, about his father’s campaign, it’s nearly impossible to detect any hints of the imperious decider who’d hold court for eight years. In this C-SPAN interview, he calls himself “a feisty kind of guy” and makes one side-swipe at liberal media bias, but otherwise comes across as rather thoughtful and in awe of his father’s political advisors. He talks about Little League and backyard barbecues and high school football games — pastimes as all-American as those the Romney brothers say they enjoy.

But like the Bushes before them, the Romney boys already have some advantages that the average American family doesn’t, not only money but their father’s connections. The private equity firm that Tagg founded in Boston after Mitt’s last presidential campaign used the family name and a promise of financial support from Mitt to lure investors, some of whom had contributed substantially to the Romney ‘08 campaign. Josh moved to Utah to work with Kem Gardner, the real estate investor who convinced Mitt Romney to work on the Salt Lake City Olympics. Although Josh has since started his own investment firm, Romney Ventures, his business, according to state records, shares an address with the Gardner Co. Among their kin, the Romney brothers come off as good-natured kids, just trying to help their dad out. But they’re also adults with experience fundraising, glad-handing and trading in on their connections for personal gain.

If Barack Obama beats Mitt Romney in November, the political prospects of the Romney boys will take a hit, as well. But if their dad wins, whatever ambitions Tagg and Josh have will get a boost. And there will still be time enough for Matt, Craig or Ben to decide to give politics a try. Given how American dynasties work, “the odds are very great that at least one of them is going to go into the family business at some time,” says Hess.