15 protesters are arrested after storming the bank's shareholders meeting 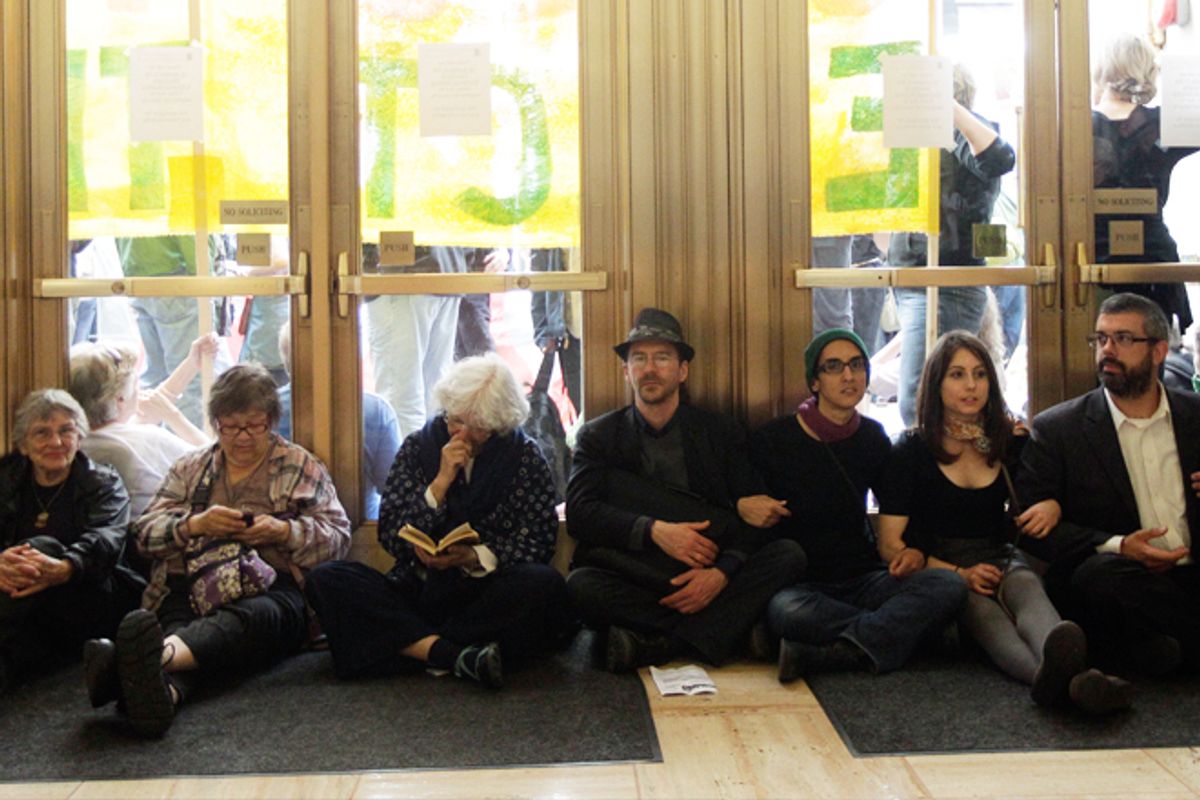 Demonstrators block a side entrance at the Wells Fargo shareholders meeting in San Francisco on Tuesday. (AP/Marcio Jose Sanchez)
--

Intervening in and disrupting business-as-usual has characterized Occupy tactics since the movement's earliest days. From encampments in prominent plazas to mass marches to impede the flows of traffic and capital in major cities, the aim has been to visibly and physically unsettle a system symbolized by glistening financial districts and their suited denizens. As such, the new plan to disrupt shareholder meetings of major corporations seems an obvious one for Occupy and its allies -- both as a means to garner attention and take the action directly to the corporate leviathans so central to Occupy grievances.

On Tuesday, in one of what organizers across the country hope to be a string of shareholder meeting disruptions, Occupy participants, union members, housing justice advocates and individuals hurt by foreclosures descended on the Wells Fargo annual summit in San Francisco. According to reports, 15 people were arrested inside the meeting of 300 shareholders (where standing room only meant that many individuals with a stake in the banking giant or their proxies could not enter the venue). The disrupters had bought stock in Wells Fargo in order to gain access; they shouted out that the bank should pay its fair share of corporate taxes and vociferously decried investments in private prisons, according to reports. Over the course of the day there were 24 arrests, as police in riot gear flanked the Merchants Exchange Building, which was surrounded by nearly 2,000 demonstrators and one giant inflatable rat.

Participants in the action were keen to spread images via social media of the heavy police presence around the summit. Live stream videographer Justin Beck interviewed a young man who, having been turned away from the shareholders meeting, noted the wall of police and remarked, "It's pretty clear who they protect, who they serve." Indeed, Salon's editor at large, Joan Walsh, wrote on Wednesday about her experience reporting on the ground during "an ugly scuffle that raised questions about police procedure during the protest."

Many demonstrators described the day as a success, but so too did Wells Fargo, who announced record profits. CEO John Stumpf may have had his speech interrupted, but he was also awarded a pay package of $19.8 million. Clearly, the metrics of success when it comes to protest actions like this remain imprecise.

However, the demonstration was successful in galvanizing a diverse support base. The disruption inside and mobilizations outside the building were planned by a broad coalition from Occupy San Francisco, labor unions and dozens of community groups operating under the banner of "99% Power." It would be too simple to call this Occupy 2.0 or "the next phase for Occupy"; since last fall Occupy has always been an amorphous and changing assemblage -- what we are seeing in the groups coming together as "99% Power" is yet another iteration of people seeking direct action and more radical tactics to challenge corporate hegemony.

Further shareholder summit disruptions are on the calendar for Occupy, labor groups and for MoveOn's 99% Spring coalition (and indeed the intersections of the above) -- whether, as some fear, the 99% Spring actions will attempt to neutralize the more radical tactics preferred by some Occupy participants is yet to be seen. Right now all eyes seem to be on the next target -- the G.E. shareholder meeting in Detroit on Wednesday, where riot cops are already lining the street.