Old ladies who didn't love me

I thought a gym class with elderly women would ease my aging anxiety, but it made me miserable in new ways 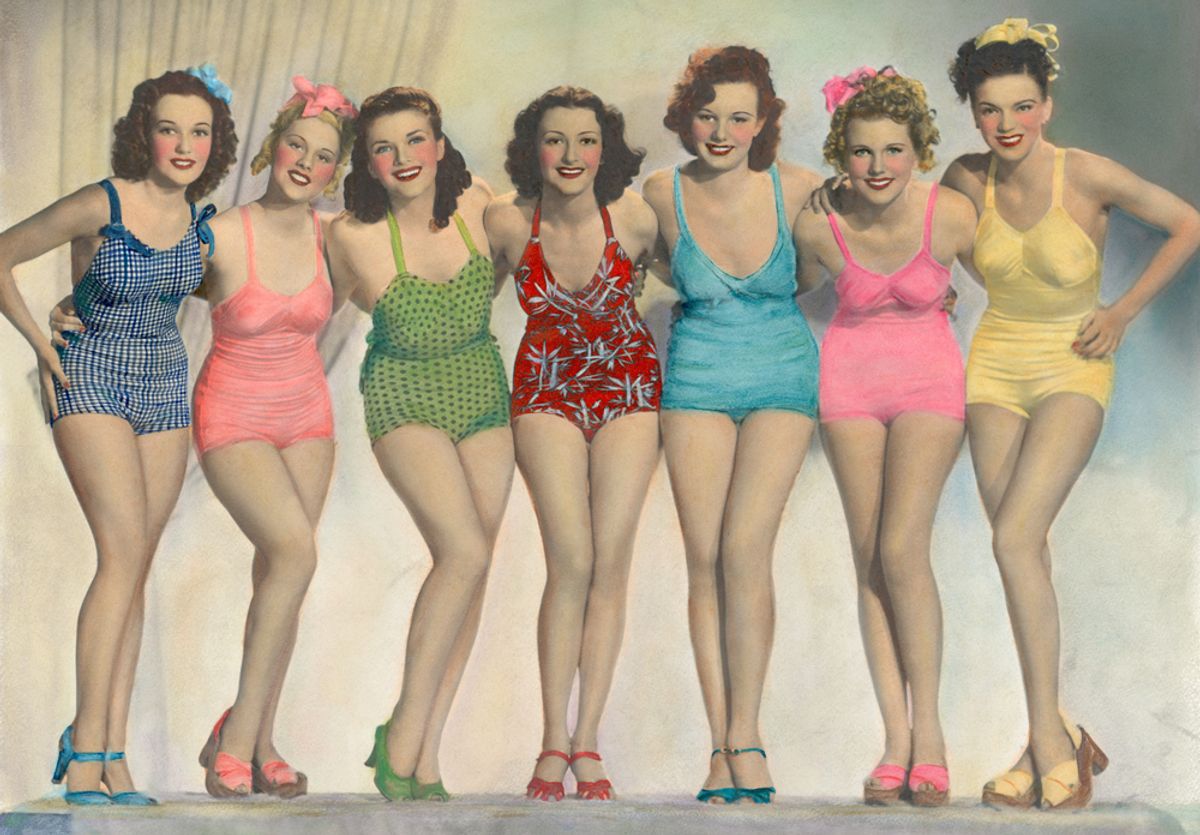 “Isn’t it soon for me to be getting arthritis?” I asked my orthopedist. I assumed I had a young person’s pain: an injury, or maybe a cyst.

At 36, I had been preoccupied by my age, and this didn’t help. I’d been looking at every woman’s neck to see when the accordion stretch of the chin would kick in. Could I stave it off a few more years? Had I blown it by not being skinny, so that I couldn’t later gain five pounds to smooth out my wrinkles?

But it wasn’t just about my appearance. With each passing year, I counted all the things I could no longer do: be an athlete, be a model, be a ballerina. It didn’t matter that I never aspired to these things. The things I had aspired to do, like write a novel and be a young mother, were also undone. (I am a mother, but not a young one.) The world and its opportunities were closing like a window. I felt like I was choking.

And even as I thought of this, I knew the basic existential dilemma: Thinking about age wouldn’t make me young. And worse, I would never be younger than I was now. I was fairly accomplished for my age: I’d traveled and known many interesting people. I’d been in love with the wrong guy. I’d been in love with the right guy. Everything seemed right on schedule. But I was weighed down by the truth of time, that it’s coming for all of us.

The orthopedist, who was close to my age (another bad sign: The doctors were my age now), recommended I swim until the swelling went down, then start physical therapy. I’m bored by regular swimming. And that’s what brought me to this -- that bastion of aged flesh, this hotbed of liver spots and teased hair, my YMCA’s aqua aerobics class.

I knew the class was populated by old women; I had a view of them from my treadmill, where I’d exercised back when I was young and could run for my health, bounding like a deer toward a television that only played shows about the Kardashians. Beyond that TV were the old ladies, splashing and working out.  I would take water aerobics and emerge feeling young, grateful for the plump of my skin, the relative tightness of my jowls. We’d all be buoyant in the water, but only I would remain so as we dried off. The older women would love me. Bonds would be forged.

My grandmother, a Russian immigrant, had taken these kinds of classes when she had been alive. She had a whole social group around the class, women who were kind and joyful, who played Rummikub and made honey cakes for each other at the Jewish new year. I had joined her once, in Brooklyn, N.Y., for the class. The poolies, as we called her chlorinated friends, were always so interested in hearing about my life, my boyfriends, my classes. My grandmother, slick with water, gleamed with pride.

And so it would be this time. I’d remind the old ladies of their daughters. They’d pass on wisdom. I would confide that I didn’t think I could wear a miniskirt anymore, at my age. They would snort and hoot and tell me what a child I am. I’d realize how silly I’ve been. I would learn that I had plenty of time.

My poolies, the ones at my gym, had necks that had long since defied definition. Massive freckled cleavage became neck became chin became face and so on. They wore bathing caps with plastic flowers and swim suits with pointy foam bra cups. Underneath, their hair was teased and thinning in shades of copper and yellow.

I wore a tankini — the illusion of the self-confidence requisite for a bikini but none of the skin reveal — and I immersed myself in the water. It was warm, and it would have been easy to mistake the high concentration of chlorine for a urine scent. I walked over to where the action was. The women were all friends. I waited shyly for someone to say hello to me, to ask me what the hell a youngster like me was doing in a place like this. No one did.

“You need a noodle,” said the instructor, a 40-something man in shorts and a T-shirt who stayed on the deck of the pool to give instructions.

I retrieved a foam noodle and was descending the ladder into the pool in silence when I heard a large woman in a red, skirted bathing suit, probably around 70, say to her friends, “The girls with the leg hair. No one shaves anymore.” There was no way she was talking about me. Right?

She was talking about me.

“Oooooh, when did you have a baby?” asked the first one, with a smile.

“Yes, I just had a baby, too,” said one with a rubber swim cap with flowers, mid-60s, grabbing her stomach in her fists. Red bathing suit snorted. “She’s 47!”

I rushed as quickly as the water would let me to the back of the class. I thought of my yoga class, where people applauded when you just showed up. The class started, and we jogged for 10 minutes. By minute five, I couldn’t do it anymore. The others looked barely winded. When it was time to stop, the instructor said to me, “It gets easier with time.”

All the ladies — the next youngest to me was perhaps 55 — turned around. When they saw me, they squealed with laughter.

“Leave her alone!” said one in a black suit with a back so low that you could see folds of fat. I thought she was an ally until: “She just had a baby, don’t forget!” Then they laughed and laughed and splashed.

We did kicking and push-ups against the wall. We brought our knees to our chins while we floated on noodles. At the end of class, the instructor made an announcement.

“I’ll be out next week, but class is still going on.”

The ladies collectively cooed and oohed their suspicion. “Do you have a hot date?” asked one.

“Yeah, with his mother!” came one answer. Again, hysterics.

I tried to make eye contact with the instructor — both of us victims, after all — but he closed his eyes and took a breath. He was used to this. He hadn’t always been this meek. The poolies had brought him to this. They were old people and they were tired of being called cute by young people. They had become mean.

No one was safe here. My grandmother’s friends had seemed so much kinder, so much more, I don’t know, grandmotherly. Had it all been a show? Had it been a front for grandmothers everywhere? I had come here to seek the gratuitous validation that only grandmothers can provide, and learned it was only my grandmother who would provide it.

I missed my grandmother. I missed her kindness, her forgiveness. I missed how I looked through her eyes. I missed how her love made me feel perfect. Maybe that’s what was upsetting me: That in addition to not being a ballerina or a model, I would also never be perfect. Or maybe what was bothering me was that I was just ganged up on by a bunch of nasty septuagenarians.

I was only 25 when my grandmother died. Back then, I hadn’t known yet that I’d get old. To me, the young were born young; the middle aged stayed that way. Her death promoted my parents to old people and me to someone who worried about death. We held her hand as she died; “Oh, Ima,” my mother whispered into her hair. We didn’t mourn gracefully. We wailed for days.

I kissed her forehead as it began to turn cold. How could her body turn cold so quickly? Shouldn’t her extraordinary warmth grant her body a few more minutes of heat than the average person gets once she passes?

Now, I looked around at these women in the pool, the ones who resembled my grandmother but certainly were not her. I wondered how they found the resolve to keep going. Didn’t they know how close to the end they were? Did they ever just want to give up? Were they ever obsessed with age like I was? Maybe that struggle had grown tiresome, like caring about the sexiness of your shoe wear. I had recently bought a pair of Danskos, big clunky things that make my Size 11 feet look like Size 12 feet. I had resigned to this because it no longer felt like it mattered what my feet looked like. It felt like I was old enough to not care anymore.

Maybe there was another way to look at them. These women didn’t fall into the role I assigned them, because they were busy being their own people. They were exercising. They were keeping their bodies strong. And they knew something I didn’t: That you’re alive until you’re not.

I floated on my back for the next minute, my ears under the water so I couldn’t hear anything. I remembered a time long ago when, at a pool party, a boy told me he’d heard that I thought he looked like Tom Cruise. I dunked under water then, like now because I was embarrassed, left alone in the eerie silence with my bubbles and with my shame. I left the pool and dried off.

On Wednesday, under the cover of late afternoon, I swam laps.