Most were polite, but when push came to shove -- literally – they protected those who abused Wells Fargo protesters 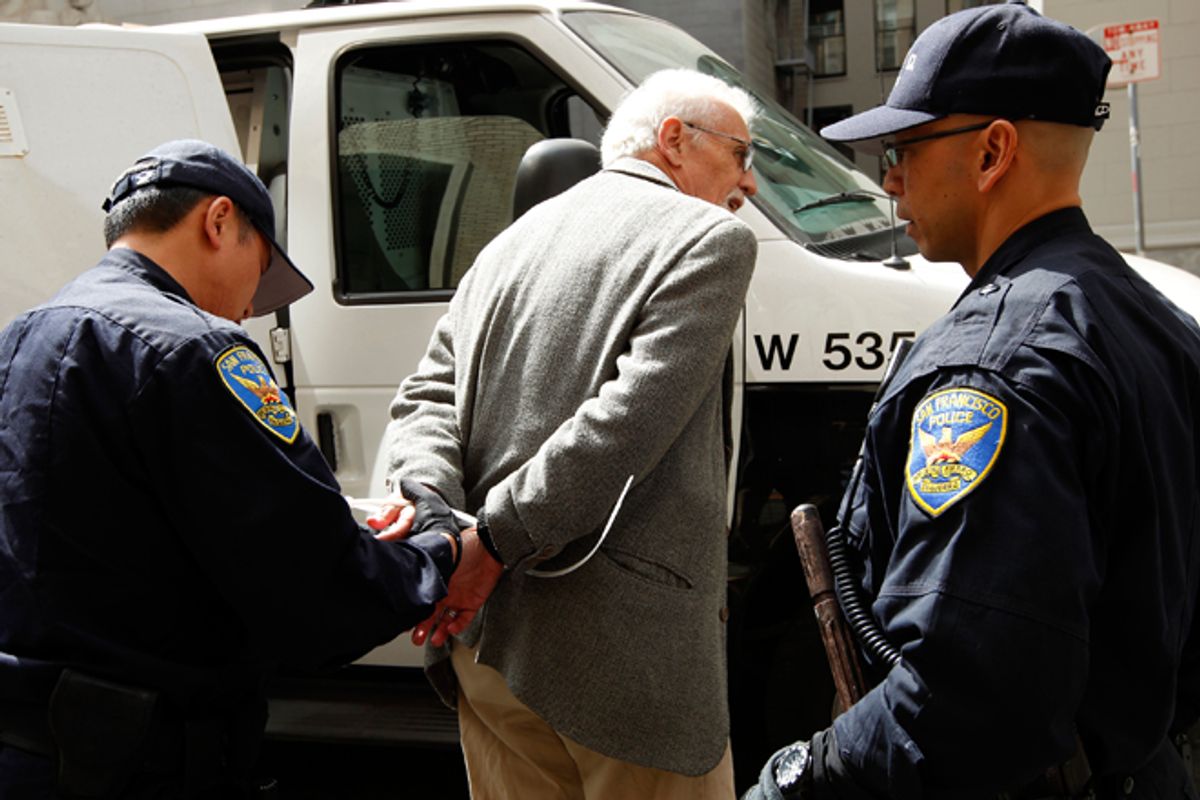 San Francisco police arrest a demonstrator during a protest outside of a Wells Fargo shareholders meeting on Tuesday. (Reuters/Robert Galbraith)
--

In the battle for hearts and minds, the folks who disrupted Wells Fargo's shareholder meeting on Tuesday bested the San Francisco Police Department. While most cops on the scene were polite to protesters and shareholders alike, a few made clear they work for the top 1 percent. I got caught in an ugly scuffle that raised questions about police procedure during the protest.

An umbrella group known as the “99% Power Movement” -- which includes the Service Employees International Union, Causa Justa, the Alliance of Californians for Community Empowerment, Occupy Bernal, Moveon.org and other organizations -- sponsored about 150 people to attend the shareholder meeting with valid proxies and voice their unhappiness with the bank's lending and foreclosure policies. Another 2,000 or so showed up to demonstrate, including activists from Occupy San Francisco. At least a few dozen had been trained in direct action and were ready to get arrested for blocking the entrances to the meeting. The protest called for a foreclosure moratorium, principle reduction for "underwater" homeowners and an end to predatory lending. Cops and Wells Fargo security mostly managed to weed out the protesting shareholders; only about 30 were able to get in.

A little more than an hour before the meeting, protesters began to blockade the main entrances to keep out the non-protesting shareholders. A friendly and cordial group of every age and race milled at the intersection of Pine and Montgomery streets. They began to lock arms and held on to a yellow rope to block a section of Pine where shareholders were supposed to enter. It was disorganized for a while. The protesters were apologetic as they turned away not only Wells shareholders (except for proxy-holding protesters) but also workers at other buildings on the street. Haile Beyene, a paralegal coming back from lunch, shrugged at the inconvenience. "I support what they're doing, but I have to go to work," he said, smiling patiently. "I'll get in." After a quick conference, the blockaders decided to let non-shareholders through, as long as they could show I.D. proving they worked in another building. Most complied cheerfully. (Hands down the biggest jerks were members of the local Equinox gym who were trying to get in for their noon workout.)

As a reporter, I got past the blockade, but a cop behind the line of protesters refused to let me past him -- although he wasn't stopping anyone else. Officer William Palladino told me I'd have to get special press credentials from the protest organizers – which the organizers denied I needed, telling Palladino to let me through.

As I was politely negotiating with him, a beefy white guy in a light-blue shirt and khakis picked a fight with the protesters, eventually shoving one of them, hard, to bust his way through their line. That protester accidentally slammed into me and threw me into a police motorcycle. As I tried to stand up, Palladino shoved me again, trying to get to the scene of the scuffle – to detain the guy who got violent, I assumed. Instead, he and several other cops helped the man who crashed his way through the line hustle down toward the meeting.

Protesters asked that the cops detain the guy for shoving us, but they refused. I asked to speak to a supervisor, but suddenly the cops weren't talking to anyone. I got a minor cut on my arm. It was no big deal, but between their arbitrary decision not to let me down the block and their protection of a guy who, had he been a protester, would undoubtedly have been charged with assault, I was disturbed.

I saw a similar dynamic several times: The most abusive people trying to crash the blockade were protected and hustled through. One Equinox gym member was chest bumping a skinny protester and screaming "Fuck you!" His assholery was rewarded by the cops escorting him past the blockade so he could get to the gym. (I should note that when the guy continued to scream obscenities at San Francisco State University junior Caitlin Murphy, who had politely asked for his gym membership card, one officer told him, "You got what you wanted, move along.") Several other times, I saw cops turn away Wells Fargo "shareholders" who held valid proxy statements – one was an elderly black man in a Navy cap – while waving through those dressed for corporate success. Later, 14 protesters were arrested.

I called the San Francisco Police Department's media relations office and Chief Greg Suhr to ask why the police had protected abusive blockade crashers and why they had denied access to those whom they perceived as protesting shareholders but let the well-heeled through to the meeting. No one has returned my calls, but when they do, I'll publish their response.