GOP Rep. Allen West told supporters that 78 to 81 Democrats in Congress are "members of the Communist Party" 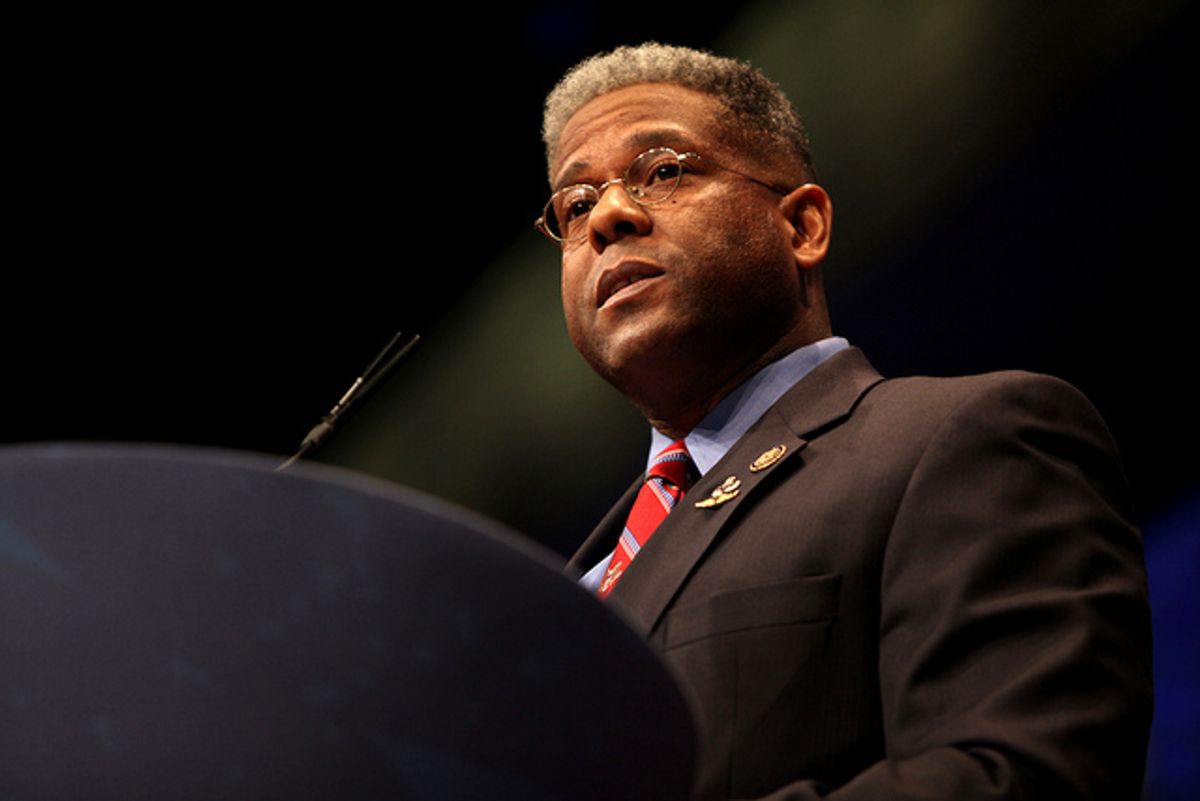 We’ve talked at times about George Orwell’s classic novel "1984," and the amnesia that sets in when we flush events down the memory hole, leaving us at the mercy of only what we know today. Sometimes, though, the past comes back to haunt, like a ghost. It happened recently when we saw U.S. Rep. Allen West of Florida on the news.

A Republican and Tea Party favorite, he was asked at a local gathering how many of his fellow members of Congress are “card-carrying Marxists or International Socialists.”

He replied, “I believe there’s about 78 to 81 members of the Democrat Party who are members of the Communist Party. It’s called the Congressional Progressive Caucus.”

By now, little of what Allen West says ever surprises. He has called President Obama “a low-level socialist agitator,” said anyone with an Obama bumper sticker on their car is “a threat to the gene pool,” and told liberals like Harry Reid and Nancy Pelosi to “get the hell out of the United States of America.” Apparently, he gets his talking points from Fox News, Rush Limbaugh or the discredited right-wing rocker Ted Nugent.

But this time, we shook our heads in disbelief: “78 to 81 Democrats … members of the Communist Party?” That’s the moment the memory hole opened up and a ghost slithered into the room. The specter stood there, watching the screen, a snickering smile on its stubbled face. Sure enough, it was the ghost of Sen. Joseph McCarthy, the Wisconsin farm boy who grew up to become one of the most contemptible thugs in American politics.

Back in the early 1950s, the Cold War had begun and Americans were troubled by the Soviet Union’s rise as an atomic superpower. Looking for a campaign issue, McCarthy seized on fear and ignorance to announce his discovery of a conspiracy within: Communist subversives who had infiltrated the government.

In speech after speech, McCarthy would hold up a list of names of members of the Communist Party he said had burrowed their way into government agencies and colleges and universities. The number he claimed would vary from day to day, and when pressed to make his list public, McCarthy would stall or claim he accidentally had thrown it away.

His failure to produce much proof to back his claims never gave him pause, as he employed lies and innuendo with swaggering bravado. McCarthy, wrote historian William Manchester, “realized that he had stumbled upon a brilliant demagogic technique … others deplored treachery, McCarthy would speak of traitors.”

And so he did, in a fearsome, reckless crusade that terrorized Washington, destroyed lives, and made a shambles of due process.

Millions of Americans lapped it up, but in the end, Joe McCarthy would be done in by the medium that he had used so effectively to spread his poison: television. In 1954, the legendary broadcaster Edward R. Murrow bravely exposed McCarthy’s tactics on the CBS program "See It Now."

“This is no time for men who oppose Senator McCarthy’s methods to keep silent,” Murrow declared. “We can deny our heritage and our history, but we cannot escape responsibility for the result. There is no way for a citizen of a Republic to abdicate his responsibilities.”

Later that same year, for 36 days on live TV, during Senate hearings on charges McCarthy had made questioning the loyalty of the U.S. Army, we saw the man raw, exposed for the lout and cowardly scoundrel he was. The climactic moment came as the Boston lawyer Joseph Welch, defending the Army, reacted with outrage when McCarthy accused Welch’s young associate Fred Fisher of communism. “Let us not assassinate this lad further, Senator,” Welch said as he shook his head in anger and sadness. “You’ve done enough. Have you no sense of decency, sir, at long last? Have you left no sense of decency? … If there is a God in heaven it will do neither you nor your cause any good.”

McCarthy never recovered. His tactics had been opposed from the outset by a handful of courageous Republican senators. Now they pressed their case with renewed vigor. One of them, Sen. Ralph Flanders of Vermont, introduced a motion to censure Joseph McCarthy. When it eventually passed 67 to 22, McCarthy was finished. He soon disappeared from the front pages. Three years later, he was dead.

All of this came rushing back as West summoned his foul spirits from the vast deep. The ghost stepped out of the past.

Like McCarthy, the more Allen West is challenged about his comments, the more he doubles down on them. Now he’s blaming the “corrupt liberal media” for stirring the pot against him – a trick for which McCarthy taught the master class. And the congressman’s latest fusillades continue to distort the beliefs and policies of those he smears – no surprise there, either.

To help him continue his fight for “the heart and soul” of America he’s asking his supporters for a contribution of $10 or more. There could even be a super PAC in this – with McCarthy’s ghost as its honorary chairman.

Plenty of kindred spirits are there to sign on. Like the author of the book "The Grand Jihad," who wrote that whether Obama is Christian or not, “the faith to which Obama actually clings is neocommunism.” Or the blogger who claims Obama is running the country into the ground “by way of the same type of race-baiting and class warfare Communism cannot exist without,” and that his policies are “unbecoming to an American president.”

From there it’s only a short hop to the kind of column that popped up on the right wing website Newsmax hinting of a possible coup “as a last resort to resolve the ‘Obama problem.’” Military intervention, the author wrote, “is what Obama’s exponentially accelerating agenda for ‘fundamental change’ toward a Marxist state is inviting upon America.” The column was quickly withdrawn but not before the website Talking Points Memo exposed it.

So beware, Rep. West, beware: In the flammable pool of toxic paranoia that passes these days as patriotism in America, a single careless match can light an inferno. You would serve your country well to withdraw your remarks and apologize for them. But if not, perhaps there are members of your own party, as possessed of conscience and as courageous as that handful of Republicans who took on Joseph McCarthy, who will now abandon fear and throw cold water on your incendiary remarks.