Love and death on the Springsteen tour

From the pit at his "Wrecking Ball" show, even his joyous body surfing ritual feels funereal -- and healing 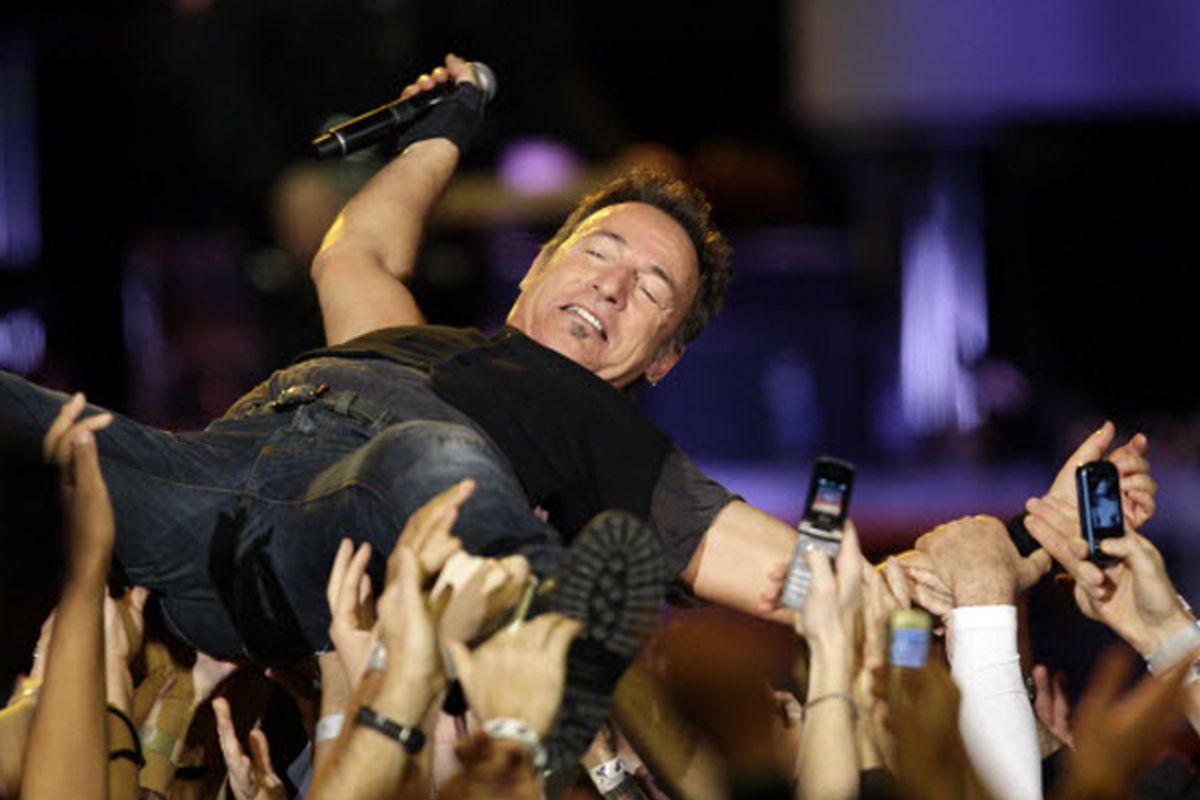 Everyone knows that Bruce Springsteen's "Wrecking Ball" tour is on one level a months-long traveling memorial service for saxophone player and Springsteen muse Clarence Clemons, who died last June, and organist Danny Federici, who succumbed to melanoma in 2008. Springsteen has said that he hopes the tour lets the E Street Nation mourn together. It wasn't until I saw the show a second time – and from the legendary "pit," where the blessed few gather and commune, literally at Springsteen's feet right below the stage -- that I understood what a thoroughgoing, transcendent exercise in communal grief and joy it has become.

There are obvious spots where he pauses to acknowledge the losses; every show review describes them. (If you haven't read reviews and you want to discover these moments yourself, as I did at my first show, bookmark this piece and read it later.) In the elegiac "My City of Ruins" (from "The Rising," his epic album of grief to commemorate 9/11), he announces a roll call for his band members, introducing them one by one, and then asks, "Is anybody missing?" over and over, as the crowd screams an ever-louder "Yes!" What began early in the tour as a spoken riff about the loss, "If you're here, and we're here, than they're here" is now, in mid-tour, part of the song, and the crowd sings along. The first time I saw him, in Madison Square Garden, that ruined me. I had never heard the closing lyrics, "With these hands, with these hands," as a prayer before.

The show famously ends with "Tenth Avenue Freeze Out," the E Street Band's founding myth, which tells the story of how Springsteen and Clemons met, solidified the band, and changed one another's life. After the line "When they made the change uptown and the big man joined the band," Bruce goes silent, the jumbo televisions in every arena now show a montage of Clemons photos, to crowd cheers and tears. After that, "all the little pretties," most of them now 40 to 60, "wave their hands" like it's 1975.

Seeing the show a second time, in San Jose Tuesday night after New York two weeks earlier, it worked on a deeper level. I came to feel that even the tour's joyous climax – Springsteen's backwards plunge into the pit from mid-arena, when the crowd rapturously and reliably ferries him from one stage to the next – had to do with death, and our physical duty to help deliver one another from this world to the next. That might be because I wasn't a spectator, but part of the crowd in the pit, charged with the duty of carrying him safely overhead. (For ultra-fans: I know he body-surfed at several shows toward the end of the 2009 "Working on a Dream" tour; this feels more central to the tour.)

As he passed above me, dressed in all black, drenched in sweat, I felt his literal body weight in my hands as I handed him back to the folks behind me. (I had a lot of help – we were never in danger of dropping him, only of maybe devouring him with love, lust and need.)  The corporeal reality, his body in my hands, reminded me for one eerie moment of the duty of a pall-bearer. I thought about Anna Deavere Smith's "Let me down easy," her poignant show about illness and dying. We do physical and spiritual work helping one another die – and helping one another cope with death, too.  It's all here, in this one show.

The "Wrecking Ball" tour is also making me more conscious of Springsteen's Catholic upbringing (which was maybe more overtly on display in "Devils and Dust.") In the haunting gospel "Rocky Ground," he's the shepherd who needs his flock. "We are Alive," a song told from the point of view of the dead in their graves who declare that their "spirits rise," opens with a reference to "Calvary Hill," which is one of the album's two references to Calvary, where Jesus died. The other reference is sort of controversial. In his searing "We Take Care of Our Own," an indictment of all the ways we actually don't do that in this country, he rails against our indifference to the struggles of the poor, "from the shotgun shack to the Superdome," continuing

There ain't no help, the Calvary stayed home

There ain't no one hearing the bugle blowin'

Springsteen fan boards immediately lit up about the "mistake" – he would seem to have meant "cavalry," the soldiers who charge in on horseback to save the day, often at the cry of a bugle – but I recognized his Catholic school education, in which you learn the excruciating physical details of Jesus's suffering and death at Calvary before you learn about divisions of the military, and you confuse the two words for the rest of your life. Two other recent "Calvary-cavalry" mix-ups come from two other Catholics, Bill O'Reilly, who confused the two when reading his Lincoln audiobook, and Conan O'Brien, who reportedly mixed them up in a comic-dramatic rendition of "War Horse." Even though the song's official lyrics were later corrected to "cavalry," he sang "Calvary" again Tuesday night, another deeply Catholic reflex that provided a clue to why his rituals of grief and redemption are so physical.

I was singing along with "Rosalita" in high school, back when you could sing "we're gonna play some pool, skip some school, act real cool" without nostalgia or irony. The fact that I sang along with "Thunder Road" just as passionately – particularly the searing line "so you're scared and you're thinking that maybe we ain't that young anymore" -- at 17 today seems a little odd.

Or maybe not. My mother died after a long fight with cancer when I was 17. I saw my first Springsteen show a few months later, at Madison's Dane County Coliseum. That time, it wasn't about mourning. Unbelievably (to me, to this day), he jumped off the stage and danced with me and another woman to "Rendezvous," a sweet pop-love song that's only on "Tracks"; I stopped telling that story after he danced with Courtney Cox on the "Dancin' in the Dark" video. Back then I needed cheering up, a way out of the land of sickness and death, grounding in the world of youth and joy, moving on without my mother. I took my little sister to her first show a year later, when she was just 14, to save her from the undertow of too-early grief as well. (We still see him together every chance we get; we were side by side in the pit Tuesday night.)

Now, though, we need a different way to approach death, as losses mount in middle age, and here he is again for us, with a tour that acknowledges our changed relationship with time. And we're there for him, too. I've always felt that those in the pit were the anointed, the saved – you have to win a lottery, and if you lose, you stand fenced outside in general admission, like the damned. This time I wondered whether we in the "pit" are in fact saved. We spend so much time writhing beneath him, reaching up to touch his hand, or just his clothes; hot, thirsty, craving a drop of water from when he periodically soaks the crowd with a drenched rag. I know we aren't damned, but maybe it's purgatory?

If so, he's there in purgatory with us, and we're all trying to take one another to the Promised Land. "I've been so lonely," he crooned sadly, as he opened his tribute to lost loved ones in "My City of Ruins." Then he told us about the magic world we were about to visit during the show, and added, "We need you to take us there, we can't get there by ourselves."

If there were a church like this, I'd be there every Sunday. If you can see him this Sunday in New Orleans, do it. Experiencing this show in the land of stately above-ground cemeteries and glorious marching-band funerals, as well as Hurricane Katrina and the Superdome, might be the ultimate way to experience this sad, heroic, redemptive tour.