Making the crazy work for him 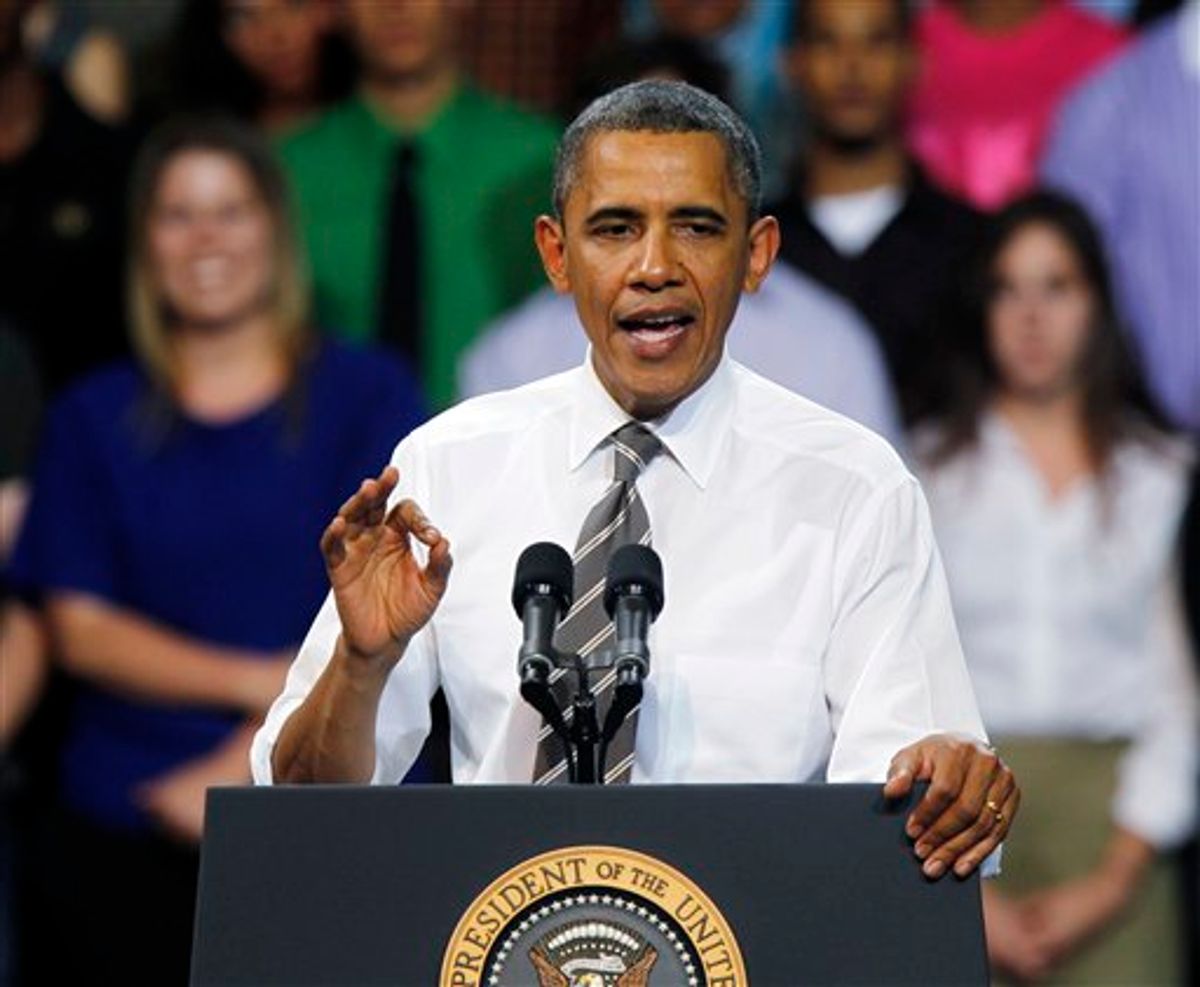 From a policy standpoint, Barack Obama’s mini-national student loan tour has already paid off, with House Republicans now publicly embracing the goal of extending the current 3.4 percent interest rate for another year. This doesn’t completely settle the matter – a standoff over how to finance the extension  looms – but just as he did with the payroll tax late last year, Obama has successfully used the threat of a public fight over a popular initiative to force the GOP off its hardline absolutism.

From the standpoint of campaign politics, though, Obama’s three-state blitz stood out for another reason: the starring role that two little-known Republican House members played in his speeches.

By themselves, the names Virginia Foxx and Todd Akin don’t have much currency outside their home districts, but each provided priceless fodder for Obama’s student loan push.

Foxx, a 68-year old who represents a solidly Republican North Carolina district, recently said in a radio interview with G. Gordon Liddy that she has “very little tolerance for people who tell me that they graduate with $200,000 of debt or even $80,000 of debt, because there’s no reason for that” and that “you don't sit on your butt and have [opportunity] dumped in your lap."

When he spoke on Tuesday at the University of North Carolina, Foxx’s alma mater, Obama quoted her comments for the crowd with evident disbelief.

“Now, can you imagine saying something like that?” he asked. “Those of you who’ve had to take out student loans, you didn’t do it because you’re lazy. You didn’t do it lightly. You don’t like debt. A lot of you, your parents are helping out, but it’s tough on them. They’re straining. And so you do it because the cost of college keeps going up and you know there’s an investment in your future.”

He went on to bring in his own personal story, noting the considerable debt that he and his wife incurred as they pursued their education, and did the same thing in a speech at the University of Colorado later in the day.

Then there’s Akin, a six-term Missouri congressman who’s seeking his party’s U.S. Senate nomination this year. At a debate last week, Akin was asked about maintaining the 3.4 percent interest rate and replied by blasting Washington’s involvement in student loans, saying that “America has got the equivalent of the stage three cancer of socialism because the federal government is tampering in all kinds of stuff it has no business tampering in.”

At the University of Iowa yesterday, Obama played this up for laughs, adopting a bemused tone as he told students: "You've got one member of Congress who compared student loans -- I'm not kidding here -- to a stage three cancer of socialism. I don't know where to start. What do you mean? What are you talking about? Come on! Just when you think you've heard it all in Washington, somebody comes up with a new way to go off the deep end."

For a president to call out little-known members of the House is a bit unusual, and by doing so Obama could be accused of punching down. But that would be misreading what he was trying to achieve. His purpose in bringing up the Foxx and Akin comments was to highlight the extremely conservative spirit that animates today’s Republican Party. Their words might have been unusually provocative, but when it comes to policy, Foxx and Akin are very much within the mainstream of the GOP.

This gets to one of the challenges Obama faces as he seeks reelection: to make voters understand that a vote for Mitt Romney is a vote to empower a Republican Party that is dominated by Foxx- and Akin-type legislators.

The good news for Obama is that voters have already turned on the GOP as a whole. The most recent CNN poll gives the GOP a 41 percent favorable rating, and the three CNN polls before that put the number in the 30s – as low as it has been since the height of the Clinton impeachment saga. It was because of perceived Republican congressional extremism that the GOP’s favorable score plummeted last summer, although it’s been relatively low for most of Obama’s presidency, as the Tea Party style has come to define Republican politics. In this sense, Foxx’s and Akin’s comments serve only to remind voters why they’ve soured on the GOP these past few years and to reinforce those feelings.

However, it’s not clear how much those negative feelings will rub off on Romney. Still, it makes sense for Obama to use all of the ammunition House Republicans offer him (and it’s hard to believe there won’t be a lot more Foxx/Akin-type comments on a whole range of issues coming from GOP House members this year). In some cases, it could put Romney on the spot, forcing him to either agree with his fellow Republican or distance himself. But mostly, it’s a perfect way for Obama to remind voters how far to the right the Republican Party has moved, no matter how much Etch A Sketching its presidential candidate does.