McCain: What war on women? 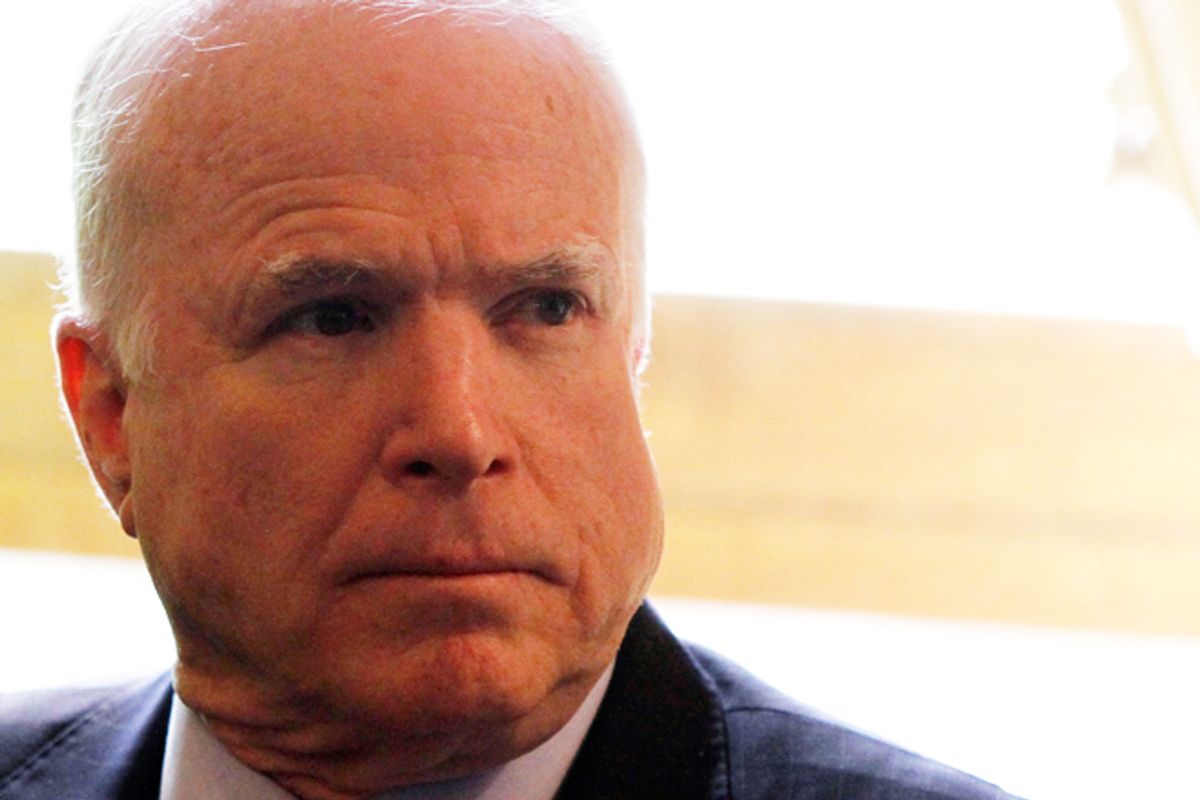 As Republicans scramble to appoint themselves champions of women, you might forgive them for awkwardly mixing messages -- it’s kind of a new role for them. There was the moderate debacle around the Lilly Ledbetter Fair Pay Act, on which Mitt Romney continues to try to have it both ways (three ways, if you count his staff not knowing if he had a position) -- that he wouldn’t have signed it, but he won’t overturn it. The coda was surrogate and vice chair of the House Republican Conference Cathy McMorris Rodgers proclaiming that “Mitt Romney supports pay equity for women.” Too bad she voted against the act herself. Meanwhile, Romney himself “happen[s] to believe that all moms are working moms,” unless they are mothers of 2-year-olds receiving federal benefits, in which he case he wants them to “have the dignity of work” elsewhere.

Now, this week, we have the slow boil of the reauthorization of the Violence Against Women Act coming to a simmer. As of today, the doubletalk was coming from John McCain. A month ago, he sounded positively reasonable when asked on "Meet the Press," “Do you think that there is something of a war on women among Republicans?” McCain replied, “I think we have to fix that. I think that there is a perception out there because of the way that this whole contraception issue played out. We need to get off of that issue in my view. I think we ought to respect the right of women to make choices in their lives and make that clear and get back on to what the American people really care about:  jobs and the economy.”

It bears noting that McCain only nominally supports “the right of women to make choices in their lives” -- he has a solidly anti-reproductive-rights record, and incidentally, his home state has been an innovator in ridiculous abortion and contraception restrictions. During his 2008 campaign, his dismissive reference to “women’s health” abortion exceptions prompted Samantha Bee to crack, “John McCain has finally put the concerns of women where they belong: in derisive air quotes.” But at least he wasn’t gaslighting the very concept of war on women, which has been the preferred response of other Republicans like Virginia Gov. Bob McDonnell: Ladies, it’s all in your head!

That changed today with McCain’s floor speech on the Violence Against Women Act, for which he said he plans to vote -- unlike other Senate Republicans who claim they cannot support provisions around same-sex couples, immigrant rights and Native American jurisdictional issues. The Senator tweeted that he was going to give a floor speech on the "ludicrous, partisan, imaginary 'war on women.'" In that speech, McCain thundered, "I don’t think either party is entitled to speak or act exclusively for one demographic of our population, one class, one race or one gender ...We don’t have male and female political parties, and we don’t need to accuse each other of caring less for the concerns of one-half of the population than we do for the other half."

He added, "My friends, this supposed 'War on Women' or the use of similarly outlandish rhetoric by partisan operatives has two purposes, and both are purely political in their purpose and effect: The first is to distract citizens from real issues that really matter and the second is to give talking heads something to sputter about when they appear on cable television." He might be right about the political operatives and the cable news talking heads, but his words also got to something fundamentally flawed about the right's pushback to being called out on misogyny. You heard it, too, when Nikki Haley insisted that women don't care about contraception, or when Romney said that Ann told him women care only about the economy. Attacks on reproductive rights -- the genesis of the "war on women" phrase -- are "real issues that really matter," and so are issues around family and work and fair pay. Even when they're used as a political cudgel, pretending they either don't exist or don't matter is itself a form of ideological warfare.

Meanwhile, the House has unveiled its own version, heralded by McMorris Rogers, who said at a press briefing, “House Republicans are committed to protecting the true victims of domestic violence and sexual assault." Fake victims, step to the left.