The myth of the "morning-after abortion pill"

There's a reason why people mistake emergency contraception and abortion: The right intentionally confuses the two 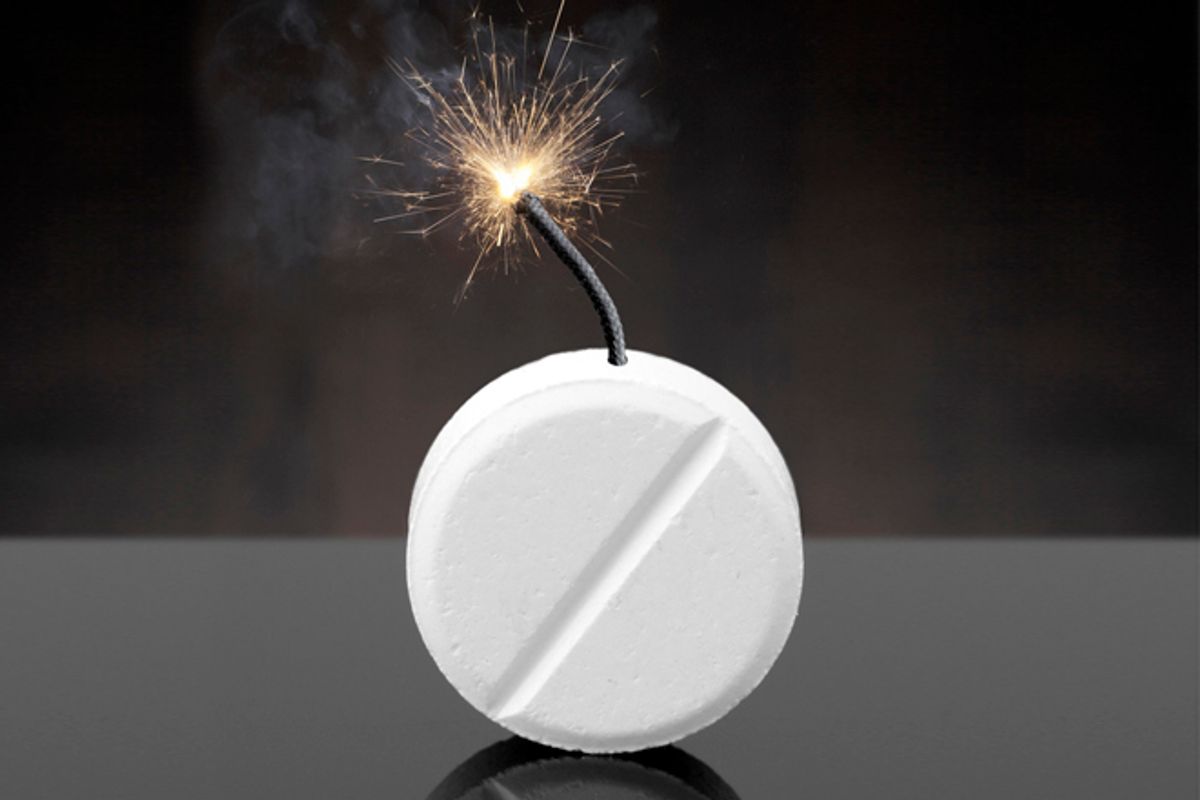 It started around February, when Republicans were still eager to talk about contraception. The Obama administration, or so Mitt Romney charged in Colorado, was forcing religious institutions to provide “morning-after pills --in other words abortive pills -- and the like, at no cost.”

It was, of course, a lie. Romney was conflating two different pills: emergency contraception, known as the morning-after pill, which prevents a pregnancy; and chemical abortion, or mifepristone, which ends a pregnancy of up to seven weeks' gestation and isn’t covered under the new guidelines. Since both pills were marketed in the U.S. around the same time, even some pro-choicers have gotten confused. But Colorado happens to be the epicenter of people confusing them on purpose. It’s the birthplace of the Personhood movement and home to Focus on the Family, both of which have strategically called emergency contraception "abortion" on the scientifically unproven basis that they could block a fertilized egg from implanting.

There are a host of ironies here. Obama has earned the renewed support of reproductive-rights advocates by requiring health insurers to cover contraception, but the Center for Reproductive Rights is still taking him to court – with oral hearings being held this week before a New York federal court -– for overruling the FDA's recommendation to lift the prescription requirement on emergency contraception for women under 17. That litigation has been winding its way through the system for over a decade, throughout the Bush-era politicization of the FDA, eventually resulting in a federal judge concluding that “the FDA repeatedly and unreasonably delayed issuing a decision on [the emergency contraception pill] Plan B for suspect reasons." The FDA was ordered to explain why Plan B shouldn't be available over the counter for girls 13 and up. When the Obama administration overruled the FDA's recommendation to make it over the counter, U.S. District Judge Edward Korman suggested the Center for Reproductive Rights reopen its case.

"It seems to me that what we’re going through is a rerun of what happened before," Korman remarked, referring to politics trumping the recommendations of medical professionals.

The Obama administration's unspoken but unmistakable fear was of an election-cycle attack line that Michele Bachmann would use anyway: That teenage girls would be able to get Plan B from “the grocery store aisles next to bubble gum and next to M&Ms.” That was, in fact, an echo of the language President Obama himself used to invoke a highly unsupported bogeyman: that "a 10-year-old or 11-year-old going to a drugstore would be able to, alongside bubble gum or batteries, ... buy a medication that potentially if not used properly can have an adverse effect."

But there is another twist, so far mostly overlooked: Emergency contraception won’t be covered by insurance for everyone, since it’s available over-the-counter for those who can show I.D. proving that they’re 17 or older. They’ll still have to fork over around $50 a pop. But as long as girls 16 and younger need a prescription for the morning-after pill and they have insurance, it will be fully covered -- effectively free. The same goes for women older than 17 who decide to jump through the hoops of getting a prescription, either for over-the-counter Plan B or the prescription-only generic and Ella versions.

As much as pro-choice advocates want to lift the barriers that make emergency contraception hard to get -- because it's more effective the faster you use it -- one of those barriers, the prescription requirement, also mitigates another, the high cost. Said Adam Sonfield, a senior public policy associate at the Guttmacher Institute, of this catch-22, "It presents a tradeoff between cost and access."

But the misinformation and misunderstanding have created a contradictory public health picture when it comes to emergency contraception. In some ways, it's become more accessible. In 2010, the U.S. approved a longer-acting French variant of Plan B, known as Ella, and there are scattered experiments in convenient delivery, from a birth-control vending machine at Shippensburg University in Pennsylvania to a new bike messenger service in London, both of which caused minor news sensations. The annual “Back Up Your Birth Control” campaign has been promoting the line “EC=BC,” emphasizing that emergency contraception is birth control, not abortion -- just in case that is a barrier for women who are considering taking it. And the Center for Reproductive Rights’ petition did manage to lower the age restriction from 18 to 17.

But there are more disturbing suggestions that misinformation is triumphing. A recent Boston Medical Center study found that many pharmacists were still often misinformed about the age requirement and were even more likely to wrongly refuse emergency contraception to 17-year-olds in low-income neighborhoods, where the rate of unintended pregnancy is higher. In Honduras, the Supreme Court upheld the criminalization of emergency contraception, which means women who use it could be jailed. Personhood initiatives, which oppose the morning-after pill, have so far failed in Colorado, Mississippi and Oklahoma, but they’ve introduced false doubts by providing even more opportunities for pundits and candidates to say “the morning-after abortion pill.”

It's a problem that dates back decades: When, throughout the ’90s, the U.S. considered approving a French chemical abortion pill known as RU-486, it was widely called the “morning-after abortion pill,” including, often, in the New York Times. The distinction wasn’t pressed by the pro-choice community itself.  “At the time, the prevailing medical wisdom was that there is a continuum rather than a bright line between EC and mifepristone,” said Gloria Feldt, who was president of Planned Parenthood at the time, with the benefit providing more options for women who did not wish to be pregnant. “It was also assumed that a formulation of mifepristone would eventually be made for use as a true ‘morning-after’ pill.” The widespread belief, she recalled, was that a chemical abortion pill would “solve all the abortion debate problems and guarantee privacy.”

Another problem was that although doctors and non-professionals had been giving women high dosages of regular birth control pills for decades as a form of emergency contraception, the science of exactly how emergency contraception worked remained unclear. The medical definition of pregnancy remains "implantation of a fertilized egg," but let’s say you believe, as the Catholic Church does, that fertilization itself creates a human life. Anti-choice advocates obsess over what would happen if a woman who took emergency contraception did happen to ovulate anyway and an egg potentially was fertilized, which is enough reason for some of them to call postcoital contraception “abortion.” They have claimed that hormonal contraception makes the lining of the endometrium inhospitable to a fertilized egg, constituting “murder.” Even the official packaging for Plan B, the single-step version of emergency contraception, suggests that “in addition” to blocking ovulation and fertilization, “it may inhibit implantation (by altering the endometrium).”

Except that we now know it doesn’t, even if you walk down the path of remote maybes, which requires you to believe that a zygote, which may not implant for unknowable reasons, has the same rights as a living woman who doesn’t want to be pregnant. As Princeton’s Kelly Cleland pointed out recently, “The science has evolved considerably in the last 13 years. Newer evidence, published since the Plan B label was approved, provides compelling evidence that levonorgestrel EC (LNG EC) works before ovulation, but not after.” The International Consortium for Emergency Contraception and the International Federation of Gynecology & Obstetrics also note that two new studies have shown conclusively that if a woman has ovulated and an egg has been fertilized, it’s too late for emergency contraception to work. They recommended that the language on the product labeling be changed.

Of course, scientific evidence has rarely had much place in this debate. In the meantime, even the most non-ideological news sources keep making the mistake alongside the ideologues. Last week, a furor erupted after the Associated Press reported that "Women seeking to take emergency contraception like the so-called ‘morning after’ pill would have to do so in the presence of a doctor under a bill before the Alabama legislature." That is, until Erin Gloria Ryan from Jezebel read the actual bill and saw that it was, in fact, a law meant to limit chemical abortion, not emergency contraception. (A spokesperson for the AP said a correction was being prepared). “The confusion over this issue is probably one of the reasons emergency contraception hasn’t had as positive an impact as hoped when it comes to lowering the abortion rate,” wrote Amanda Marcotte at RH Reality Check. “If women think it is some kind of abortion-ish thing, they probably think taking it is a big deal, instead of thinking of it more like taking the pill, since it’s basically the same thing.”

But talk about moved goalposts. If '90s-era advocates had hoped that the ability to end a pregnancy in the safety of your home with RU-486 -- the actual abortion pill, not the morning-after one -- would defuse the abortion debate, their more recent counterparts hoped to take it to the next technological level by providing “tele-med” abortions. They would involve doctors seeing a woman over webcam with a nurse practitioner physically present, helping women in remote areas with ever-dwindling options for safe abortions to access them. But four states have already passed requirements meant to undercut these options by forcing a doctor’s presence, and the bill the Associated Press misreported was aiming to add Alabama to the list. All in all, there have been fewer gamechangers, and more cases of one step forward, two steps back.