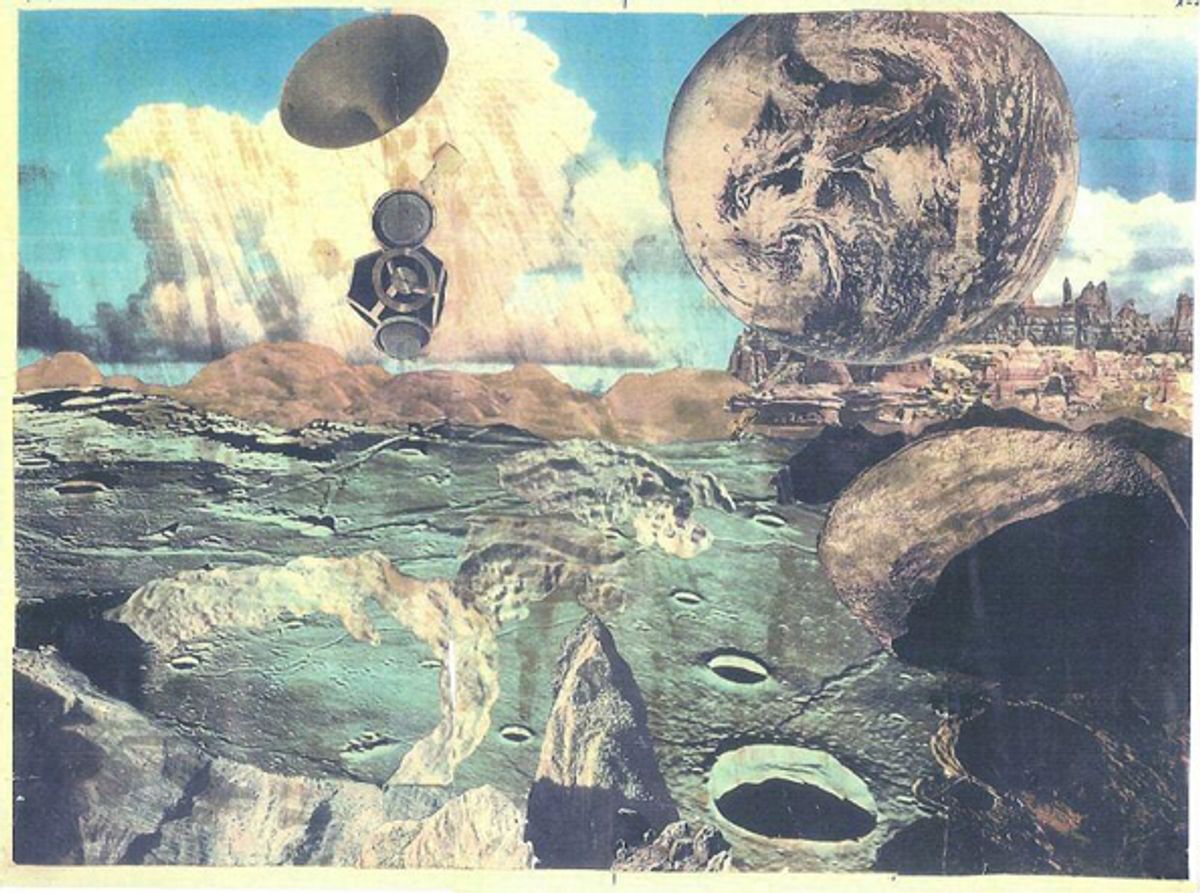 Jack Kirby had choices to make, especially considering he could do it all: writing, penciling, inking, coloring. Along the way he found it prudent to concentrate on what he could do best: dream big and render those flights of fancy in graphite. Why then would he choose to break his stride and search through various magazines in search of the right image, rubber cement in hand?

Kirby’s entrée into the world of collage did not begin with the "Fantastic Four," or even by his own hand. Richard Hamilton included a (Simon &) Kirby "Young Romance" splash page in his seminal 1956 collage “Just What Is It That Makes Today’s Homes So Different, So Appealing?” launching both pop art and Kirby into the fine-art world. “High” culture had begun to give sway to pop culture through the most democratic of visual art forms, collage.

True its origins could be traced back to ancient Japan, and examples exist from the 13th century in Persia, spreading to Turkey and eventually Europe by the 1600s. The modern version that first captured the public’s attention was created in 1912, when Pablo Picasso glued newspaper clippings into a cubist painting. The artist’s and general public’s fascination with collage had begun. Artists of the Russian constructivist, Bauhaus, dada and surrealist movements pushed the form further. When Henri Matisse’s eyesight began to fail, he turned to cut-paper collage, producing “Jazz,” celebrating the other 20th-century art form that employed improvisation and spontaneity as a main ingredient. During the abstract impression movement of the 1950s Rauschenberg, Reinhart and Motherwell explored the medium further.

Artists more widely known for their other talents, such as William S. Burroughs, John Cage and Louis Armstrong, all created collage. In comics, the ever-inventive Will Eisner employed the technique in "The Spirit" in “The Story of Gerhard Shnobble” in 1948. However this featured a single aerial cityscape with drawn figures and captions on top, to connote flight, rather than fully realized collaged elements. If anything, dramatic as the effect was, this could be seen as a shortcut on the part of the artist, as much time was saved rendering architecture. Never one to take the easy way out, Jack Kirby was the first in comics to utilize collage as entirely something new and explore its full potential, despite the crude printing techniques of the time.

Beginning in 1964 with the "Fantastic Four," Kirby created collages to convey fanciful scenes of cosmic dimensions. These early comic collages were used to further the storytelling and appear to be created concurrently. However, according to former assistant and Kirby biographer Mark Evanier, by the 1970s Kirby would often create collages from his collection of photographic magazines such as National Geographic and Life, whenever the mood struck him, and make good use of them at a later date. Considering that he was one of the fastest artists in comics, and worked upward of 70 to 80 hours a week at the drawing board during this period, why would Kirby slow himself down to create a collage, which no doubt was more time-consuming? Scissors, X-acto knife, and rubber cement were no match for the lightening speed of his hand. It is yet additional evidence of Kirby’s unbridled creativity and imagination, as well as the compulsive need to create at all costs, spending time composing these collages in what little spare time he had. Similarly, Louis Armstrong somehow found time to create more than 500 collages while touring 300-plus dates around the world.

Despite the rudimentary printing of the time, these early collages captured the imagination of many of my generation. Somehow we were able to see past the murkiness and peer into a universe we hadn’t experienced before. At the dawn of the space age, along with Sputnik, the Mercury flights and high-powered telescopes, we were able to view galaxies heretofore unimaginable. Reportedly, it was Kirby’s intention to render the entire Negative Zone storyline in the "Fantastic Four" in collage, a pursuit he abandoned due to his page rate, the speed of his pencil, and the printed result. Still, he would continue with this new passion through the 1970s, carrying the technique over to DC. Kirby’s Fourth World comics featured myriad collages, and significantly he began to create even more sophisticated works for his intended new line of magazines, "Spirit World" and "In the Days of the Mob," both originally planned as four-color publications. Removed from sequential storytelling and employed rather as illustration, these collages stand on their own as singular works of art. Kirby was so passionate about this art form, that when he was asked if they should bring anything, he would request visitors to his home bring periodicals as fodder for his collages. Louis Armstrong did likewise.

Kirby in comics, and Pushpin studios in advertising in the 1960s, presented impressionable young minds with vibrant and exuberant visual art that influenced the psychedelic art movement soon to follow. Significantly, psychedelic artists such as Victor Moscoso, Stanley Mouse and Wes Wilson all used collage in their work. As author James Romberger pointed out in his article “Undiscovered Particles” in the Jack Kirby Quarterly issue No. 15, a Merry Prankster poster heralding an acid test, replete with music provided by the Grateful Dead, featured Kirby’s Thor upfront, center.

Kirby’s interest in collage was so keen that in the early '70s he wanted to create fumetti comics, composed entirely of photographs with captions, but could receive no support from DC. Ever ahead of his time, these became popular at the end of the decade in the United States with comic adaptations of films such as "Star Trek," "Grease," "Saturday Night Fever," "Rocky II," "Close Encounters of the Third Kind" and "Battlestar Galactica," although the medium had been popular prior in France, Spain and Latin America.

[caption id="attachment_302291" align="aligncenter" width="460" caption="Soul Poster , which was folded and tipped into the issue of Spirit World. Both magazines were canceled after only one issue each."]

The poster is worthy of closer examination. Entitled “SOULS” it is composed in a clockwise manner, with large eyeless heads leading the viewer in a circular motion, with smaller figures punctuating the spaces between. A disembodied eye floats below a half-obscured castle, four headless women walk single file in Victorian era gowns, ghostly figures peer out from three windows, and a drawn nude male figure, back to the viewer, merges with a large rock formation. All this is printed in a single color, purple, which adds to the intended eeriness. What is interesting is the variation in tonality that creates the illusion of foreground and background. Considering the source is all found material, one gets a glimpse into how carefully constructed these collages are. Although rhythmic, Kirby’s approach to collage appears to have been careful consideration as opposed to unfettered spontaneity.

[caption id="attachment_302321" align="aligncenter" width="460" caption="In 1970 Kirby moved from Marvel to DC. He employed the same collage techniques to his run there. Including this one: Metron presentation collage, 1969"]

Below, Kirby created two magazines, "Spirit World" and "In the Days of the Mob," originally intended to be printed in four-color throughout. After the publisher DC reneged, he had to reconfigure both as single-color interiors with four-color covers only.

Kirby’s collages have little in common with cubism or dadaism in execution, such as those by Picasso, Marcel Duchamp, Man Ray or Kurt Schwitters, but the affect of surrealism is in clear evidence. Following the staid 1950s (at least by popular perception), the 1960s saw a return to the dreamlike qualities of surrealism both through mainstream culture through advertising and counterculture imagery as well. Perhaps Kirby’s collages come closest to the work of courageous anti-Nazi artist John Heartfield, whose pointed political works were not only intended to be responded to viscerally but also told a story. Then again, there are Kirby collages in existence where the original motivation remains mysterious.

[caption id="attachment_302401" align="aligncenter" width="460" caption="When Kirby returned to Marvel in 1975 he continued the practice, here for his adaptation of Stanley Kubrick’s "2001: A Space Odyssey""]

Unfortunately the origins of Kirby’s interest in collage are unknown. Conceivably his awareness did indeed begin with his inclusion in Hamilton’s groundbreaking piece. Certainly artists such as Picasso and Matisse were household names during his early years. What these works do provide is yet another glimpse into the mind and genius of Jack Kirby, the cosmic imagination that tirelessly explored new areas of creativity and expression, with the singularity, passion and inventiveness only an artist of his stature could bring. Today, thanks to improved technology, both digital and printed, we can view his collages closer to the spirit in which they were created.

Below: Miscellaneous Kirby collages that have never been published.

Steven Brower is a graphic designer, writer and educator and the former Creative Director/ Art Director of Print. He is the author/designer of books on Louis Armstrong, Mort Meskin, Woody Guthrie and the history of mass-market paperbacks. He is Director of the “Get Your Masters with the Masters” low residency MFA program for educators and working professionals at Marywood University in Scranton, PA. @stevenianbrower