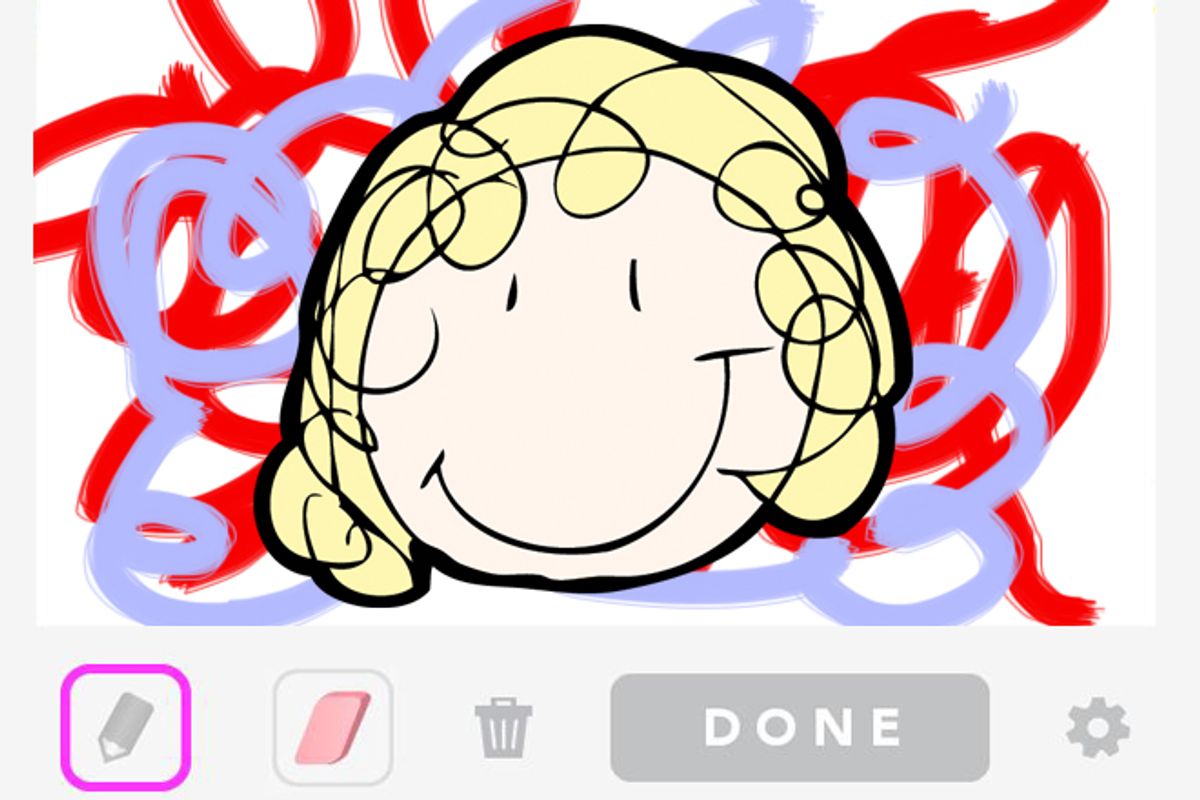 Upon first brush, there’s not too much to grasp on to with Draw Something. The title of the game is essentially its elevator pitch: You are presented with three words, then you pick one, and then have a blank canvas on your smartphone/tablet/whatever to, well, draw something. You use your finger to draw some stuff on the screen, which ten times out of nine comes out as some sub-MS Paint-worthy scribble. The person you’re playing with then guesses what you just drew. Then, they draw something. You watch this happen, all in real time. And on a certain level, that’s it. Pictionary for the digital age. But why do we play Draw Something so obsessively, like an alcoholic returning to the bar for just one more round, and then another? Perhaps there is something downright pedestrian about Draw Something. Then again, that might be the point.

What’s astonishing about the game from a pure numbers standpoint is how many people are playing the damn thing. In its first five weeks, 20 million people downloaded it. Fifteen days later, that number increased to 50 million. Miley Cyrus plays it. So does Rosie O’Donnell. There are 6.9 billion people in the world. That means statistically, about 7 percent of the world plays Draw Something. It is currently the second-ranked paid app in the iPhone and iPad's app stores (its free version is ranked second on iPads).

Though it reads “social game” much in the same way as Words With Friends and Scramble (also With Friends) do, Draw Something is an entirely different chimera, more of an exercise in interpersonal communication than a game per se.

It’s owned by Zynga, the social gaming behemoth whose IPO launched for a billion dollars. Zynga more or less made its name from FarmVille, which was a game that you probably remember downloading for Facebook and then becoming obsessed with. It was about farming. In all likelihood, you played it for a few weeks and then deleted it because it became annoying. Such is the Zynga way — release something addictingly addictive, have its user base grow tired of it, and then release something else that is equally addictive. Their strategy is, as the notoriously business-minded rapper Jay-Z might say, an exercise in “on to the next one.”

Zynga's games are overwhelmingly free, and the company is publicly traded (stock is resting comfortably at $9 a share, for all you Gordon Gekkos out there). Essentially, all Zynga games are what some people refer to as “freemium” games. That means they’re free, with a caveat: You get the game, but you don’t get the full experience. If you want the Full Zynga Experience, you have to shell out. In FarmVille, this meant you could convert your money into “Farm Cash,” which could also be earned — albeit at a snail’s pace.

There’s a thing about addiction, though. Eventually, you get over it. You might enter into a 12-step program, or you might just delete Words With Friends from your phone. Whatever you have to do. Zynga understands this. This is why it offers social games of every flavor, from Words/Chess/Scramble/Hanging With Friends to Farm/Fish/Forest/Castle/PetVille to both Mafia and Vampire Wars. Clearly, Zynga is just plugging in different variables to the same equation. But people like the equation.

The same business model applies to Draw Something. In the game, your color palette is extremely limited. You get black, plus the primary colors. There is no mixing. Want pink? Oh, that’ll be 249 gold coins. Don’t worry. You get four other colors with it, too. And if you give Zynga $25 dollars, they will give you 10,000 gold coins, which translates into being able to buy basically every single color in existence, even the ones scientists haven’t come up with yet. This is the same strategy that your friendly neighborhood drug dealer employs: Give something to somebody for free, get them hooked, and then stand out of their way while they trip over themselves to give you money. It’s like the brains behind Zynga got their financial savvy equally from Business School and by listening to Biggie.

Still, there’s something compelling about Draw Something that just isn’t there with other Zynga games. It lies within the fact that unlike Words With Friends or Mafia Wars or any of the approximately 1 zillion other Zynga properties, Draw Something is an intensely communicative nonverbal experience. There’s no chat function (though the recent game update allows you to offer comments on your drawing), so anything you’ve got to say has to go down on that little white canvas. Sometimes, people will just write what they’re trying to draw out. It’s an interesting strategy, and not an unfair one. It’s still hard to draw a word on a touchscreen, and if you’ve got terrible enough handwriting (as I do), it might just look like a herd of portentously shaped snakes.

But by watching someone struggle to draw a clown fish on a blank canvas, you’ve inadvertently opened a window into their personality. There is a certain voyeuristic pleasure to be derived from watching your drawing be sculpted for someone in real time, and then watching them guess at it, and then watching them go through their own creative process, struggling to re-create a pirate ship, or Skrillex, or such abstractions as “champ” or “thug.” Succeeding at Draw Something is less a test of artistic skill — imagine Matisse, color-obsessive that he was, trying to make do with his scant four colors as he tried to draw a facsimile of a snail on his iPhone — and more a testament to the relationship one has with their Draw Something partner.

I might not be able to draw my way out of a paper bag — thankfully, a concept that has not cropped up for me in the game yet — but if someone really gets me, they’ll know that little yellow squiggle with a couple jagged edges is a walrus, not a hornet’s nest or a stack of gold doubloons or an orangutan. (Note to self: Buy the “Mardi Gras Color Package,” whatever that means. It has orange in it.)

That’s another thing about the game — there’s no way to win. Once you hit your 99th turn with someone, the game resets and you’re back to round one, without even so much as a virtual fist bump. It’s Theseus, finally slaying the minotaur, only to find himself back at the start of the labyrinth and having to do it all again. It’s quixotic in the fullest sense of the term, only instead of a suit of armor and Sancho, you’ve got a digital, smartphone-shaped scimitar and your fingers. And your friend.

In this way, Draw Something isn’t really a game at all. It’s a conversation, full of pointed chit-chat, pictures, and sometimes several-hour lapses. After challenging me to a game, my dad didn’t realize that you were supposed to play at your own leisure, and sent me an antsy series of texts because I didn’t draw him back immediately. My father’s immediate instinct to treat the game as if we were sitting across from each other speaks to a very real generational gap. When my father was my age, you were lucky if you could jam a computer into a ranch-style home. Now, he’s got a computer in his hand, and he’s drawing on it. That’s pretty drawesome (as the app puts it), in and of itself.

I have very few running conversations in my life. I like it that way. It’s hard to talk with someone on, say, Gchat, for hours or days on end, and there are few people I would actually try to do such a thing with. However, I am currently playing 14 games of Draw Something. Social games allow for a certain level of mediation, creating the necessary distance to feel like you’re interacting with someone without actually talking to them. In many ways Draw Something is the perfect surrogate for real communication — drawing is an inherently more impressionistic mode of exchange than speaking, but you’re still getting your message across. It’s not like Words With Friends, where you’re taking turns filling in tiles on a faux Scrabble board with somebody you went to school, while holding a real conversation with them in the app's chat function. There’s still a message to be gleaned. Draw Something just tells you what you’re trying to say.

Drew Millard is an Associate Editor at Kill Screen Magazine and a freelance music writer. His writing has appeared in the Wall Street Journal, VICE, and Time Out New York. His blog Rap Industry Fan Fiction was named one of Huffington Post's "Seven Sites You Should Be Wasting Time On Right Now." He lives in Brooklyn, because of course he does. He tweets from @drewmillard.