Chen Guangcheng slipped his captors Sunday. Will the Chinese government retaliate against his family? 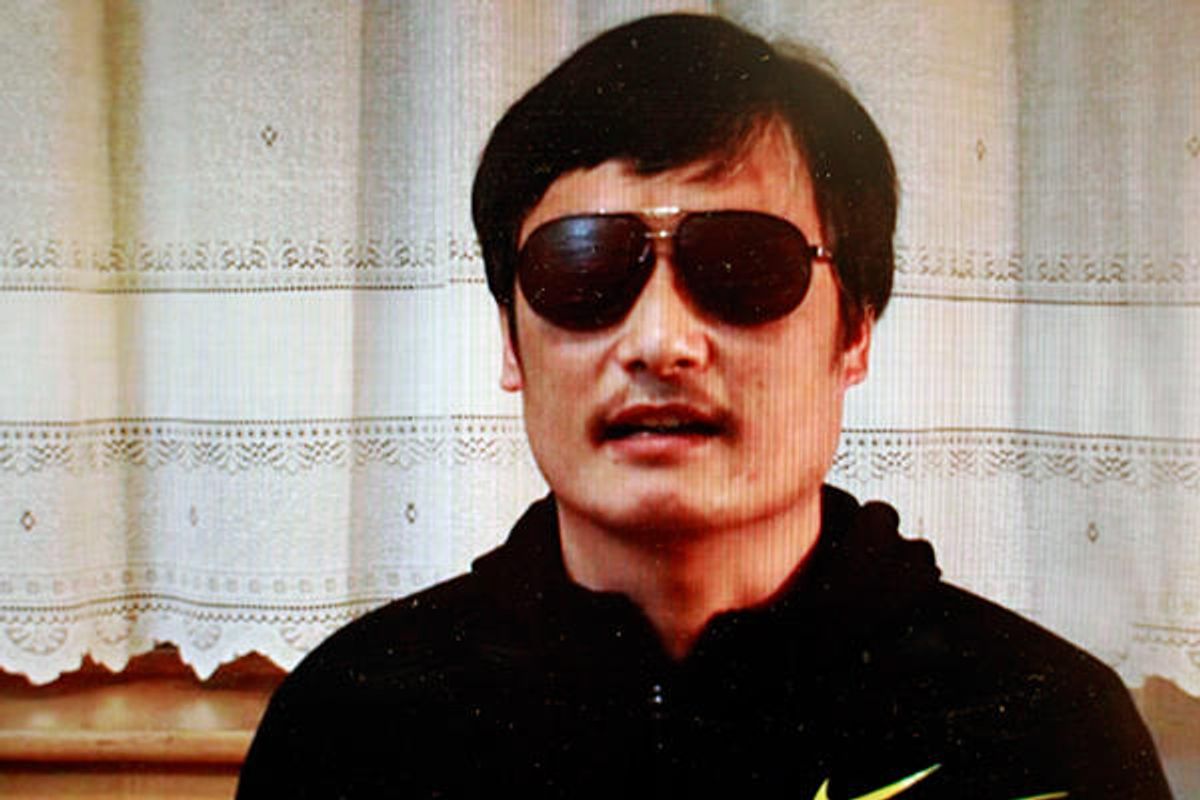 But the dangers facing Chen, his family and his supporters are far from over.

Chen slipped away from his home village of Dongshigu in Shandong province and is in a “100 percent safe location” in Beijing, activists reported after his escape was revealed today. But in a video circulated on the Chinese-language website Boxun earlier today, Chen appealed to Prime Minister Wen Jiabao to “personally intervene” to ensure that his family isn’t subjected to "retaliation of insane proportion" by his captors. Chen also asked Prime Minister Wen to investigate “those who ordered county-level police and officials to break into my house, beat and hurt me, refused me medical attention – without any legal foundation or officers wearing uniforms.”

The plight of Chen Guangcheng, his family and his supporters is an exemplar of the yawning gap between the Chinese government’s frequent avowals of support for rule of law with the far grimmer reality faced by Chinese citizens who challenge the status quo. Other high-profile victims of such rough justice include the imprisoned Nobel Peace Prize laureate Liu Xiaobo, the imprisoned human rights lawyer Gao Zhisheng, and the recently imprisoned housing rights activist Ni Yulan.

Chen’s fear of retribution is well-founded. Those same local government officials and security forces he mentions in the video – who have operated in plainclothes thuggish anonymity – have tormented Chen and his family by subjecting him to unlawful detention at his home since his release from prison in September 2010. Chen served more than four years in prison on spurious charges in reprisal for defending the interests of women allegedly subjected to forced abortions by local family-planning officials.

During the past 19 months, Chen and his family – including his wife, Yuan Weijing, and his elderly mother -- have been targeted with physical violence by his captors and denied their constitutionally guaranteed rights of freedom of movement, expression and association. In 2011, those same authorities barred Chen Guangcheng’s 6-year-old daughter, Chen Kesi, from attending school. They subsequently relented, but her school attendance is under the constant supervision of three guards who monitor her every move.

In the hours since Chen’s release has become public, Chinese state media have reported that his nephew, Chen Kegui, is the target of a manhunt; he was allegedly involved with several government officials in a violent altercation in his home earlier this week. Chen Kegui issued a statement describing the altercation as self-defense after people in civilian clothes who didn’t identify themselves broke into his home. It is entirely possible that Chen’s former captors will try to retaliate against anyone else they suspect of assisting Chen in his escape.

What has spooked the local government authorities who have orchestrated Chen’s suffering is the level of popular support he has garnered. Since July 2011, dozens of Chinese citizens have attempted to break the blockade around Chen Guangcheng’s Dongshigu home to visit him and express support. These activists have invariably been obstructed by the thugs who block access to Chen’s village. Some activists have reportedly been beaten and robbed in such attempts. Most famously, in December 2011, the thugs obstructed and manhandled the British actor Christian Bale and an accompanying CNN crew who were trying to visit Chen.

The central government of President Hu Jintao and Prime Minister Wen need to respond to Chen’s appeal for the protection of the rule of law and an investigation of the local government officials and security forces in Shandong who have abused him and his family. Foreign governments need to echo Chen’s call for the Chinese central government to guarantee his safety and make it clear that it’s an urgent priority for maintaining healthy bilateral relations.

The Chinese government needs to understand that the risks of ignoring Chen’s plight – or worse, surrendering him to his abusers – carries far greater potential risk than reward. News of Chen’s escape is circulating across China via the country’s Twitter-like social network sites despite pervasive government censorship.

A betrayal of Chen and his family will only feed popular skepticism about the ruling Chinese government’s 62-year monopoly on power during the current transition to new leadership. As Chen said in the video released on Boxun, “If we have a thorough investigation into my case and announce the result, I think people would appreciate it. If you continue to ignore me, what would the public think?”