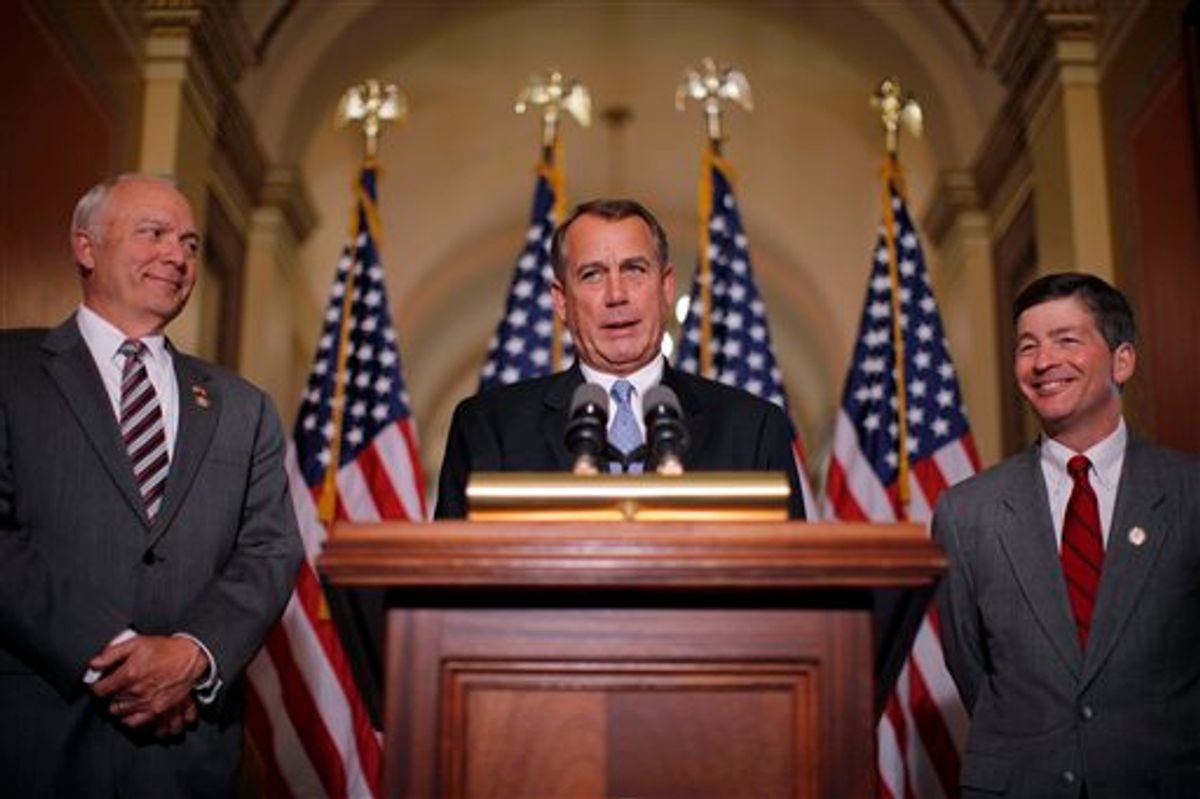 If the political strategy congressional Republicans have pursued since scoring one of the most thorough midterm election landslides in history in 2010 had to be summed up in one word, it would be: suicidal.

Well, that’s not entirely true. Dozens of House Republicans represent deeply red districts, where the only real threat to their continued employment comes from primary challenges. For these members, absolutist devotion to conservative orthodoxy is a winning political strategy. But at the national level – and in states and districts where general elections are competitive – that same approach can create serious problems for Republicans.

Which is how the GOP found itself at the end of last summer with a favorable rating of barely more than 30 percent. When his party took over the House in early 2011, Speaker John Boehner deferred to the most conservative elements of his conference, recognizing that he lacked the true believer credentials to impose decisions on them and fearing that they’d mutiny if he dared try. The result was a series of politically destructive confrontations with President Obama, culminating in the debt ceiling showdown. Similar stories played out in state houses across the country, the party took a hit in last November’s off-year elections, and its image isn’t much better now than it was at the end of last summer.

This is probably the right context for understanding two somewhat surprising Capitol Hill developments this week.

The first came on Wednesday, when Boehner announced that House Republicans were prepared to support a one-year extension of the current 3.4 percent interest rate on student loans. This came about 24 hours after President Obama began barnstorming the country in an effort to highlight GOP reluctance to extend the rate. This was a fight Obama badly wanted to have, but Boehner’s announcement defused much of the drama. There’ll still be a confrontation, but it will be over how to pay for an extension – not whether there should be one. This puts Republicans on safer political ground.

The second surprise came Thursday afternoon, when 15 Senate Republicans broke with their party and voted for a Democratic bill to reauthorize the Violence Against Women Act. When the bill had been in committee, not a single Republican voted to send it to the floor. As with student loans, the issue is still not settled; House Republicans are poised to pass their own version, the differences will be sorted out by a conference committee, and who knows how the final version will be received? Still, at least for now, Republicans are positioning themselves in a way that makes their extremism less apparent.

This may be part of a broader pattern. As Greg Sargent has pointed out, the student loan debate is playing out much like the payroll tax cut extension did. When lower payroll tax rates were set to expire last December, House Republicans initially balked at an extension and Democrats prepared to excoriate them for causing an election year tax hike for millions of middle class families. But then, just before New Year’s, conservatives in the House relented and went along with a two-month extension  When that extension came up in February, a brief dispute over how to pay for another one arose, with Democrats suggesting higher taxes on the wealthy. Republicans rejected that idea, then simply signed off on an extension that included no spending cut offsets.

Republicans, it seemed, had recognized the potential political damage that would come with letting the tax cuts lapse, put their philosophical objections aside, and gone along for the sake of election year expediency. This was not how they’d conducted themselves for most of 2011. It remains to be seen whether they’ll come to the same conclusion on student loans, but they’ve already taken an un-2011-like step just by committing themselves to an extension.

It may be that Republicans in the House have developed some political self-awareness – that they now recognize that treating every issue as a test of purity can make them very unappealing to swing voters, and that a poisonous image could cost the entire party dearly in November. Boehner’s public declaration this week that the GOP has a 30 percent chance of losing the House might have been his way of reinforcing this.

This isn’t to say that the GOP has solved its image problem. It was less than a month ago that virtually every Republican in the House went on record supporting Paul Ryan’s budget, and the party exhibited utter tone deafness in waging a fight over Obama’s plan to require employers to cover contraception. There’s also no shortage of individual Republicans eager to validate swing voters’ worst fears about the GOP; just look at the fun Obama had this week in ridiculing over-the-top statements about student loans made by two Republican House members. And to the extent they are being more pragmatic, there’s every reason to believe it’s a short-term ploy – that the insistence on purity will pick right back up after the election, especially if Mitt Romney ends up in the White House.

The unpopularity of the GOP brand has been a potential ace-in-the-hole for Obama, something that might give pause to swing voters who are otherwise inclined to support Romney. If congressional Republicans are able to rein in some of their politically destructive impulses even temporarily, it could give a real boost to their general election prospects.