From France to Norway, the far right is at its greatest strength since World War II 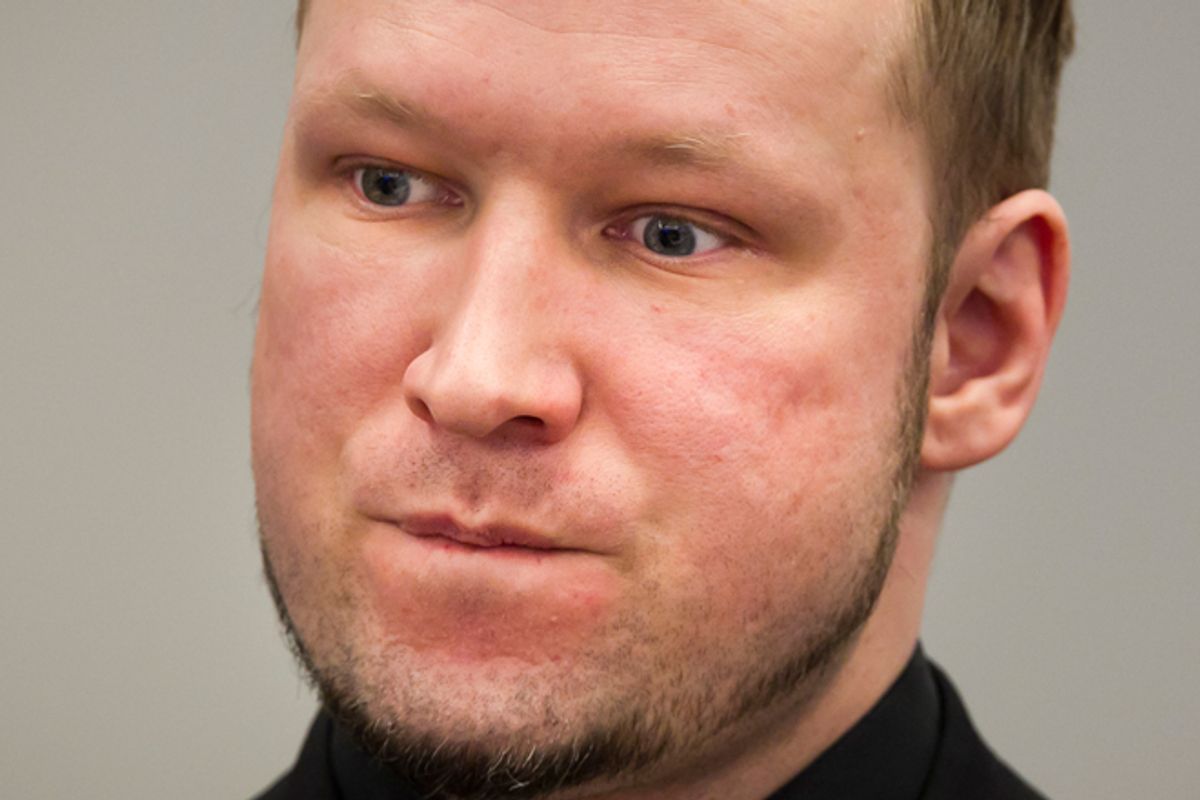 Marine Le Pen, who put a friendly smile on her father’s neo-fascist National Front, has become “the third man” in French politics and could now determine whether the center-right incumbent Nicolas Sarkozy or the center-left Socialist François Hollande becomes the country’s next president. Geert Wilders, the golden-haired leader of the Dutch Freedom Party, has just brought down the right-wing coalition government that he had supported. And in an Oslo courtroom, Anders Behring Breivik fights to prove he was sane last July when he systematically slaughtered 77 innocent people, mostly teenagers, at a summer camp. He was, he explains, simply trying to spark a crusade against multiculturalism, “cultural Marxism” and Muslims living in Europe.

Le Pen, the "right-wing liberal" Wilders and the unbelievably weird Breivik differ in crucial ways, but they reflect the range and varied thrust of Europe’s far right, which is showing its greatest strength since World War II. All three have given up yesterday’s Jew-baiting, at least in public, and proudly proclaim their support of Israel. They all target Muslims as a major source of Europe’s current woes, preaching a white European nationalism that is largely Christian and intolerant of immigrants and other outsiders. And they all feed on a popular backlash against the European Union and Eurozone and the failure of mainstream leaders to provide any sense of hope at a time of crippling economic crisis.

Far and away the most important, Marine Le Pen often appears as little more than a right-wing populist seeking protest votes. But this ignores who she is, where she comes from and why she has never disavowed her father’s pro-Nazi past. “It’s the same politics of scapegoating that it always has been,” explains Professor Nonna Mayer, an expert on the French far right at the prestigious Paris Institute for Political Studies, or Sciences Po. “There’s no getting away from it.”

Crafty, charismatic and shamelessly provocative, her father Jean-Marie Le Pen is a former paratrooper and intelligence officer whose unit brutally tortured and killed “Arab terrorists” in Algeria. He created the National Front in 1972, bringing together self-proclaimed fascists, Vichy collaborators, well-known war criminals and more traditional right-wing Catholics. He publicly dismissed the Holocaust as “a mere detail in the history of the Second World War.” He publicly made puns about the Nazi gas ovens. He accused former president Jacques Chirac of being “in the pay of Jewish organizations,” and this February a French appeals court upheld his conviction for denying crimes against humanity when he said that the Nazi occupation of France “was not especially inhumane.” But as far back as his historic 2002 campaign against Chirac, he downplayed his signature anti-Semitism and directed his hatred primarily at Muslims, whom he accused of taking French jobs, threatening French culture and polluting the national identity. “Tomorrow, if you don't watch out,” he warned, “they will take your home, eat your food and sleep with your wife, your daughter, or your son.”

One overlooked nugget from his past throws unexpected light on what his youngest daughter is now trying to do. In the late 1960s, the elder Le Pen ran a record company that produced “The Third Reich: Voices and Songs of the German Revolution.” The album included such old favorites as “Vive Hitler” and “The Hymn of the Nazi Party.” On the record jacket, Le Pen characterized Hitler and the National Socialists in their rise to power as “a powerful mass movement, altogether popular and democratic, that triumphed through elections.”

Marine shows how this might work today. Trying to remove the historic stigma from the National Front, she has presented herself as a wholesome girl next door become modern-day Joan of Arc. “I am not racist, not anti-Semitic, not xenophobic, but patriotic,” she insists. “Our party is not based on hate toward others, but on love for our own country.” She also dismissed the label “extreme right” and describes herself as a “moderate.” A lawyer with professional self-discipline, she has avoided Jean-Marie’s racist and anti-Semitic remarks, which she rightly sees as inflammatory and counter-productive. She has worked, not always successfully, to tone down her bodyguards and their bully-boy tactics. And she has made a knowledgeable attack on neoliberal economics and finance-dominated capitalism, which many voters found more credible than Hollande’s badly compromised social democratic critique or Jean-Luc Melénchon’s far-left update of Karl Marx.

Still, Marine follows Jean-Marie’s lead. She regularly attacks Muslims and made a huge uproar when a state-owned restaurant chain announced that eight of its outlets would offer exclusively halal meals. Distinguishing herself from Geert Wilders in the Netherlands, she insists that she is “not waging war against Islam,” but only against “the Islamization of French Society,” the phrase Jean-Marie used in his 2002 run for president.

All this picked up in March, after the killing of three French paratroopers, a rabbi and three Jewish schoolchildren in and around Toulouse. The alleged and apparently self-admitted killer, Mohamed Merah, was a French Muslim, and Marine wasted no time in escalating a string of blistering attacks against “radical Islam” and the laxity of Sarkozy’s government in allowing Muslim neighborhoods to fall into “the hands of bullies and fanatical imams.” Sarkozy himself gave legitimacy to her Muslim-bashing, shamelessly competing with her for the anti-immigrant, anti-Muslim vote and further helping the National Front gain acceptance as a respectable part of French politics.

Now, in the May 6 presidential run-off, she seems unlikely to endorse either Sarkozy or Hollande. The only question is whether she will encourage her voters to abstain, which if they do will guarantee defeat for Sarkozy and his UMP, the Union for a Popular Majority. Her goal, openly discussed, is to win several seats in June’s parliamentary elections and join forces with right-wing UMP defectors in a "Blue Marine Rally” to become leader of the country’s conservative opposition. This will be no easy task, but don’t underestimate her drive or determination. She is, after all, the daughter of Jean-Marie Le Pen, only more effective and, in our opinion, more dangerous.

Kicking Over the Table

Geert Wilders knows how to make people angry, and rarely more so than last week when he suddenly walked out of talks to cut the Dutch budget deficit to 3 percent, in line with longstanding and often ignored European Union requirements. His Freedom Party holds 23 seats in the lower house of parliament and his refusal to continue supporting the governing right-wing coalition forced the government to resign and schedule new elections for September. A caretaker government has just announced a new austerity budget deal without Wilders, but any further uncertainty could cause the country to lose its highly prized AAA rating on government bonds. No wonder backers of the customary Dutch consensus are railing so loudly against him for “kicking over the table.”

Wilders first gained notoriety – and support – with his abrasive attacks on Islam, which he sums up in a new book, “Marked for Death: Islam’s War against the West and Me.” He generally steers clear of Le Pen’s National Front and other right-wing groups with fascist roots, but has been no less militant in his passion against immigrants and Islam. He called on his fellow citizens to stop the building of new mosques, to prevent Muslim women from wearing full-face veils and to ban sales of the Koran, which he compared to Mein Kampf. Speaking in New York on Sept. 11, 2010, he condemned plans to build the Park 51 Islamic mosque and cultural center two blocks from ground zero, a project that the city’s mayor, Michael Bloomberg, had stuck out his neck to defend in the name of tolerance.

“Mayor Bloomberg forgets that openness cannot be open-ended,” Wilders countered. “A tolerant society is not a suicidal society. It must defend itself against the powers of darkness, the force of hatred and the blight of ignorance. It cannot tolerate the intolerant – and survive.” Or, as the French Revolution’s Louis de Saint-Just defended the Great Terror and its guillotine, “No liberty for the enemies of liberty.”

But Islam and immigration have never been Wilders’s only issues. A longtime Eurosceptic, he helped defeat the proposed European Constitution in the 2005 referendum and has talked about the advantages of leaving the Euro. Now he goes even further, risking his political career with an all-out attack. The polls say he will lose seats in the next election, which he will make a referendum on Europe, “unelected Eurocrats” and “the diktats of Brussels.” Given the continuing failure of European leaders to deal effectively with either the economic crisis or the growing backlash against their largely undemocratic institutions, don’t bet against him.

Whatever the court in Oslo rules on the sanity of mass murderer Anders Behring Breivik, he is not wired like the rest of us. Prosecutors have skillfully forced him to admit that he has greatly embellished with “pompous language” all his talk of his Knights Templar secret society, covert cells of superbly trained Christian warriors and the 1,500-page compendium he called a European Declaration of independence. “So if you take away all the pompousness, what are you left with?” asked the soft-spoken government attorney Inga Bejer Engh. “You basically sat in your bedroom, on your own, and you copy-pasted your so-called compendium from the Internet.” Breivik had gotten the platform he so desperately wanted and he stood revealed as a failed businessman, a fraud, a video addict and, in the devastating headline of London’s Sunday Times, a “Loser Who Lived with His Mum.”

The deconstruction of Breivik brilliantly serves the needs of the Norwegian court, which can now find him criminally culpable without giving any credence to his claims. It also soothes the feelings of those who lost their loved ones or survived the nightmare he created with his car bomb in Oslo and his killing spree on Utoya Island. But the courtroom drama obscures a larger truth. Breivik may be living out a fantasy, but many far-right Europeans share the anti-Muslim, anti-immigrant and anti-elite views he expressed.

The newly respectable Marine Le Pen makes this clear. She immediately issued a statement saying that “The National Front condemns these barbarian and cowardly acts and expresses its total solidarity with the people of Norway.” But she continues to argue that “fear of a crazy man” will not stop her from fighting against the Islamic fundamentalism, Sharia law and the Islamization of France. Her father went even further, blaming the killings on Norway’s failure to understand the danger that wide-scale immigration poses to the world. As he said at the time with undiplomatic directness, “The murderous consequences seem to me much more linked to the naivety of the Norwegian state than the madness of this crazy person.”

For all their differences, the Le Pens, Wilders and even Breivik are all singing from the same hymn book, as Europe’s far right marches on.

* Research for this article was funded in part by One Horizon.