Bill Clinton to the rescue 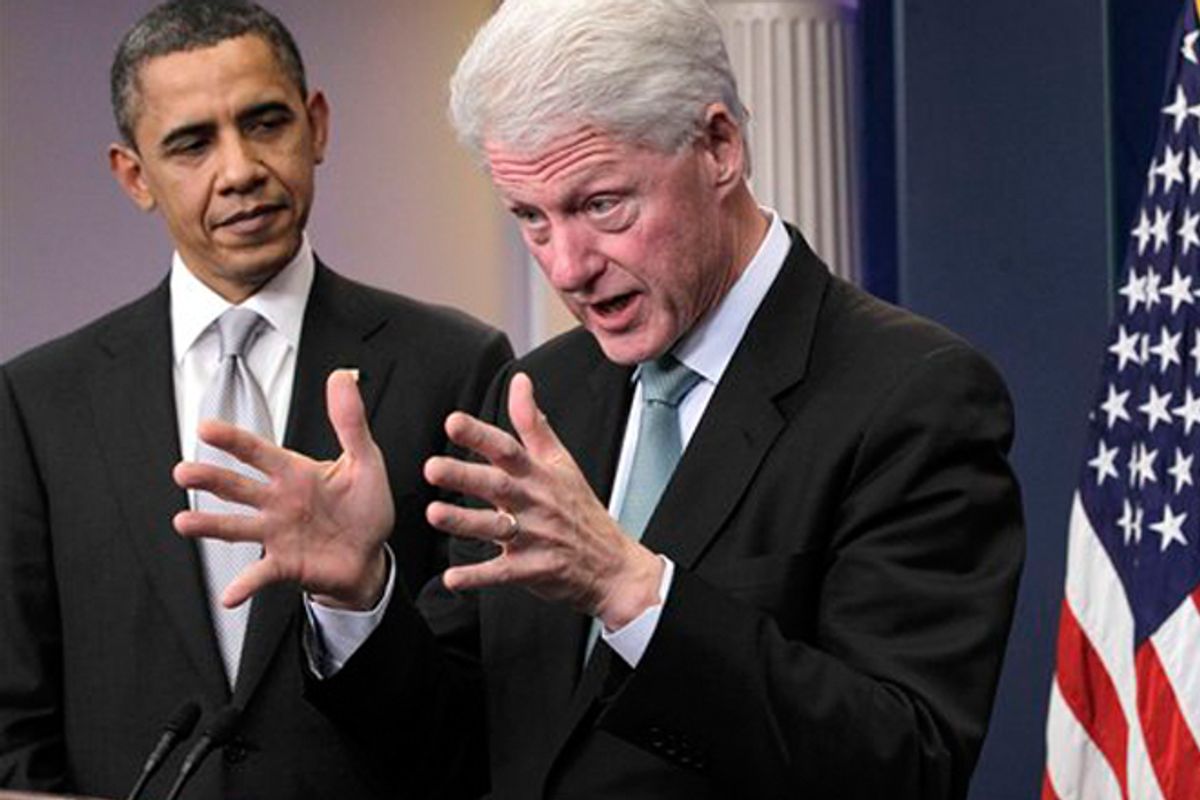 The high-profile help that he’s lending Barack Obama – starring in a campaign video about Osama bin Laden’s killing, headlining a fundraiser in Virginia last night, plotting campaign strategy with top Obama lieutenants – speaks to Bill Clinton’s unique status among former presidents: Not since Theodore Roosevelt a century ago has one managed to remain such a political force after leaving office.

Clinton is more popular than ever right now, notching a 67-29 percent favorable in one recent poll, which helps explain why Obama is eager to enlist him in what should be a tight general election campaign. There really is no modern precedent for a former president being so actively engaged in a national election so long after leaving the White House.

Part of this is a simple matter of math: Few presidents were as young as Clinton was (54 years old) when he left the White House. Ronald Reagan, for instance, was 78 when his second term ended in 1989, and with an Alzheimer’s diagnosis in 1994, the public phase of his post-presidency lasted just five years.

Reagan was called out of retirement to help the beleaguered George H.W. Bush in the 1992 campaign, delivering a speech at the Republican convention and making a few campaign stops in the fall. But Reagan’s advanced age and declining health limited his activity, and his effectiveness was further compromised by his low public standing in the early years of his post-presidency.  It wasn’t until the mid- to late-1990s, when he was living out his life in seclusion, that the relentless hagiography of his admirers helped restore Reagan’s popularity.

Or there’s (the first) Bush’s story. He was pushing 70 when he left office, but his post-presidential years have been vibrant. To commemorate his 85thbirthday in 2009, Bush jumped out of an airplane and parachuted to the ground 10,500 feet below.

Feats like this have done wonders for his personal popularity, which is much stronger now than it was during his doomed reelection campaign, but Bush has mostly stayed off the national political stage. Four years after leaving office, he spoke at the Republican convention and made a few public appearances with Bob Dole, his party’s presidential nominee (and his one-time nemesis). But in the wake of Dole’s defeat, Bush’s son stepped forward to lead the GOP, and the old man has said little about politics since then.

But even younger ex-presidents haven’t played anything like the role Clinton now enjoys. Some had little choice. Richard Nixon is the obvious example here. There’s also Bush 43, whose invisibility since leaving Washington in 2009 is a result of the broad consensus – even within his party – that his presidency was a failure. Lyndon Johnson, only 60 years old when he retired from the presidency, probably fits in this category too, thanks to Vietnam. LBJ was said to favor Ed Muskie for the 1972 Democratic nomination, but kept quiet for fear that his endorsement would actually make the man from Maine less attractive to Democrats.

With others, it’s more complicated. Gerald Ford, who was never actually elected to the presidency or the vice presidency, remained a heavyweight for the first few years of his post-presidency, flirting with a comeback bid in 1980 and nearly landing on that fall’s Reagan-led ticket. But Reagan’s general election triumph cemented the “New Right’s” takeover of the GOP, leaving Ford, an emblem of the party’s old, less ideological order, to live out his political retirement on America’s golf courses.

Jimmy Carter’s post-presidency is a full three-act drama. He was 56 when he was crushed by Reagan in ’80, his approval rating hovering around 30 percent, about where Bush 43’s was toward the end of his second term. But Carter experienced a remarkable rehabilitation of his image over the next decade. His work with Habitat for Humanity and global advocacy of human rights and democracy lifted his personal popularity, while the early ‘90s recession created a popular – if short-lived – consensus that the Reagan-Bush 41 years had been a failure. In the summer of 1992, polls showed voters were more sentimental for Carter’s presidency than Reagan’s, and Carter delivered a prime-time speech at the Democrats’ New York convention.

But his political relevance peaked there. As Reagan hagiography, which cast the Carter presidency as one of the darkest periods in American history, took hold, Carter became a more polarizing figure, while his outspokenness on foreign policy issues – particularly involving Israel and the Middle East – helped make him persona non grata in establishment Democratic circles. Carter’s has been an active and globally relevant post-presidency, but in domestic politics he’s mostly been marginalized.

Clinton, by contrast, has remained in generally good health – there was heart surgery in 2004, but that didn’t sideline him for long – and in the mainstream of his party. That his successor’s administration is held in such low regard has helped Clinton’s presidency attain “good old days” in the public’s mind, and his wife’s prominence has kept the possibility of a Clinton restoration alive since the day they left the White House.

Plus, Obama’s victory in 2008 prompted the right to refocus its 24-hour attack apparatus on him, leaving the Clintons alone for the first time since they crashed the national political scene in ’92. Conservatives now also speak of the Clinton era as the good old days, a major reason why the former president’s ratings have soared the past few years – and why he’s so valuable to Obama now.

The last ex-president to be in such demand by his party’s candidate was probably Dwight Eisenhower, whose general election blessing Barry Goldwater desperately sought in 1964. But Ike didn’t embrace the spotlight like Clinton, partly because of Goldwater’s far-right views, but also because of his own ill health. (Heart problems had also kept him off the 1960 campaign trail, when his vice president, Nixon, was running against John F. Kennedy.) He ultimately filmed an awkward, unhelpful television ad with Goldwater, and maintained a low profile for the final few years of his life.

You have to go all the way back to Roosevelt to find a comparably vigorous and politically relevant ex-president. Roosevelt opted not to run for another term in 1908, went on an African safari, then came home and returned to the political arena. He tried and failed to grab the 1912 Republican nomination from his handpicked successor, William Howard Taft, then bolted the GOP to run as the Progressive Party’s candidate, helping Woodrow Wilson secure an easy general election victory. In 1916, Roosevelt was nominated again by the Progressives, but declined to accept it and returned to the Republican fold, where he began positioning himself for 1920 – only to die a year before the election.

A subsequent constitutional amendment prohibits Clinton from completely mimicking Roosevelt. But between his work for Obama this year and his involvement in his wife’s political career, he’s doing the next best thing.