Corrected: In order to survive past May Day, the movement will have to fend off attempts at co-optation 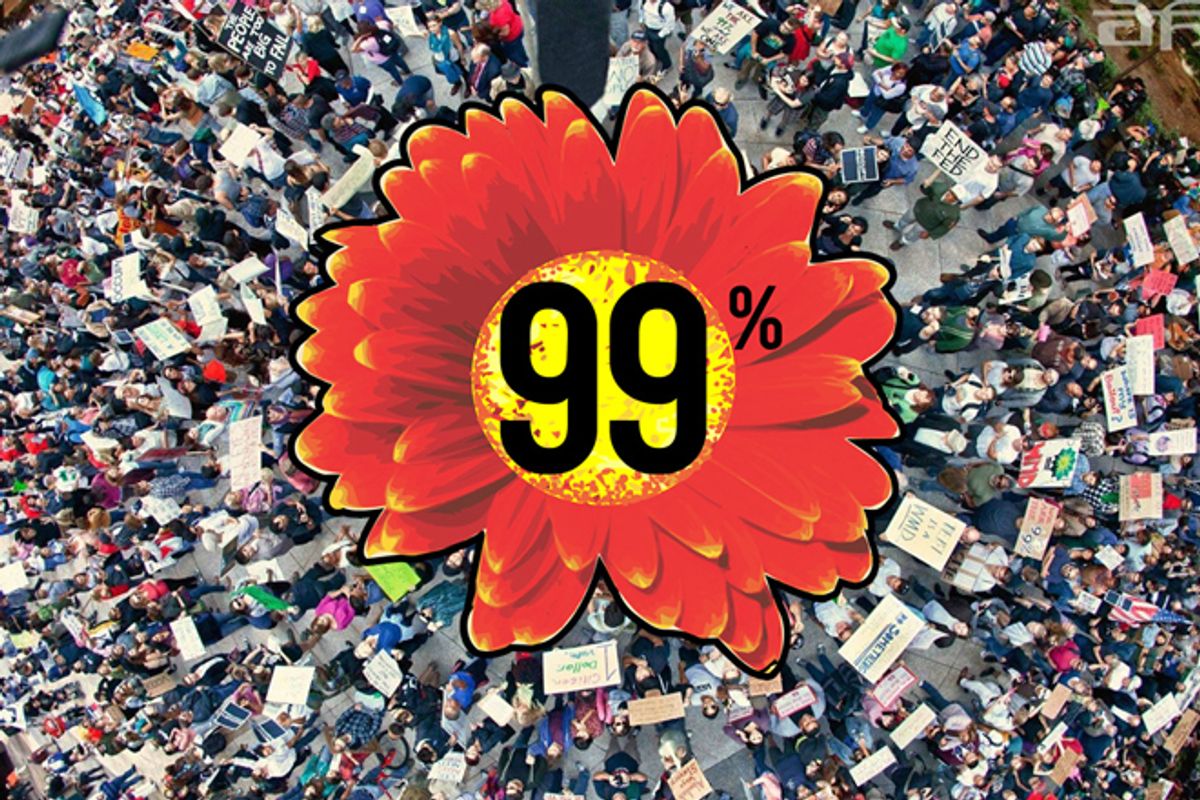 Occupy Wall Street hopes for a national resurgence Tuesday with its plans for a May Day general strike. Equally important, however, to the movement’s future will be the result of a debate that’s been roiling the encampments for the past month. “Co-optation” is the word you hear activists whisper, whether you’re in New York, Atlanta or Albuquerque. Are unions and liberal groups like MoveOn valuable allies? Or do they pose a threat, seeing the Occupy movement as nothing more than a “brand” whose language can be slipped on and deployed to their own ends – namely, a Democratic triumph in November?

The source of these fears is the “99 Percent Spring" and similar campaigns, as Natasha Lennard recently explained in Salon. It sounds like something any Occupier could get behind: to train 100,000 people for “sustained nonviolent direct action” against targets like Verizon, Bank of America and Wal-Mart. However, it arose not in the encampments, but in high-level discussions among groups like MoveOn and Rebuild the Dream. AdBusters, the magazine that helped spark Occupy Wall Street, attacked the 99 Percent Spring as the product of “the same cabal of old world thinkers who have blunted the possibility of revolution for decades.”

“There is a real concern about what MoveOn is doing and if it is co-optation,” says Sayrah Namaste, an activist with (Un)Occupy Albuquerque. “People from (Un)Occupy see MoveOn as heavily part of Democratic Party politics and question what their motives are and how they operate.” Some of the 99 Percent Spring organizers are quick to dismiss Occupy’s critique: “Maybe Occupy is worried about its own viability,” said one core organizer who asked to remain anonymous.

This distrust stems in part from the campaign to end the Iraq War, which left-wing activists say MoveOn abandoned in 2007 after it became clear that newly elected Democrats wouldn’t fight to end it. There is also, however, a structural tension. “MoveOn is very top down,” says Leslie Cagan, co-founder and former national coordinator of United for Peace and Justice. “As best I can tell, they have never developed a democratic structure that allows the members to vote on who the leadership will be or how decisions are made, let alone have serious input into the positions that MoveOn takes.” What this top-down structure means, says Bill Dobbs, a member of the Occupy Wall Street press team and longtime antiwar activist, is that “Groups like MoveOn can walk into any Occupy movement and engage in the discussions, but we can’t participate in their strategy discussions.”

The 99 Percent Movement, which includes the 99 Percent Spring, appears to be a case of top-down decision making. To a large extent, MoveOn and other liberal organizations have simply used Occupy ideas and rhetoric to rebrand existing projects. “Occupy Wall Street happened and crystallized a lot of the frustration,” says Justin Ruben, the executive director of MoveOn. “It engaged millions more people and captured the imagination of the whole world. It had this 99 Percent frame that did something that nobody else had managed to do yet, which was to tell this whole story through characters and unify these twin problems of political and economic inequality. It was just an amazingly powerful frame. We said, OK, this is the name for it because people were walking around with signs saying ‘I am the 99 Percent.’”

In particular, the 99 Percent Movement builds on MoveOn and Rebuild the Dream’s American Dream campaign from last year. Some of the new campaigns are simply repackaged American Dream campaigns. “99% Candidates” were originally “American Dream candidates”; the 99% Voter Pledge  “has been based in part on the Contract for the American Dream,” according to Ruben (though the 99% Voter Pledge was not actually written by MoveOn). He says some actions are new, but he acknowledges to Salon there's a lot of old wine in a new bottle. “There is a bunch of groups that have been actively involved in putting the 99 Percent Spring together and these are the actions that they … have been planning since the summer before Occupy.”

While MoveOn and other organizations praise Occupy Wall Street for shifting the political terrain to the left, they are forging ahead with creating a movement that presents itself as Occupy’s successor. Writing in the Nation, Ilyse Hogue, who serves on the board of Rebuild the Dream and is the former Director of Political Advocacy and Communications for MoveOn, describes occupying public space as nothing more than a “tactic” that is now “dead.” Hogue wants to “make way for the new,” namely the 99 Percent Spring and the 99 Percent brand. Also writing in the Nation around the same time, Van Jones, the former Obama administration official who co-founded the Democratic Party-allied Rebuild the Dream, stated, “This spring 2012 will mark the long-awaited re-emergence of the 99 Percent movement.”

“The 99 Percent Movement is the broad wave of folks who’ve been coming together over the last 14 or 15 months in increasing numbers to fight for economic justice and against inequality,” Ruben adds. “Within that, Occupy is one powerful, amazing and important part of that movement, but it is not limited to Occupy.”

Ruben insists that the 99 Percent Movement is “not a rebranding strategy.” He also says, however, “No one organization controls the 99 Percent brand.” MoveOn has also been eager to sponsor all sorts of campaigns, helping to create a meta-brand known as the “99 Percent Movement” that encompasses a product line including 99% Power, 99% Candidates, 99% Uniting, a 99% Voter Pledge, and events like “All in for the 99%” and “99% Spring Bank Protests.” MoveOn also employs a P.R. firm, BerlinRosen, to help promote its campaigns. Like inside-the-Beltway power brokers who play both sides of the aisle, BerlinRosen’s client roster includes Brookfield Properties – the “owner” of Zuccotti Park.

This type of double dealing is what led to the Occupy Wall Street movement to begin with. And its effects can be seen in the 99 Percent Voter Pledge, which is so watered down from the original OWS Declaration (and even the Rebuild the Dream Contract) – “Make the wealthiest one percent pay their fair share”; “Create good jobs now”; “Stop cuts to vital services”; and “Represent people, not corporations” – that Obama could endorse them, which, again, is probably the point.

“We are the 800-pound gorilla, and we work very actively on elections, including supporting Barack Obama and other Democratic candidates,” Ruben says. “If you think that is a terrible idea and you’re worried about energy from the movement that you love going into elections then MoveOn is an obvious target.”

Ruben continues, “There are real elections happening where people are choosing between candidates who want to cut taxes for billionaires and candidates who want billionaires to pay their fair share. And that’s a real choice.” Many Occupiers beg to differ. Sure, plenty say they will hold their nose and vote for Obama, but few think it will make a real difference. Bill Dobbs says, “If Obama is fighting for the 99 Percent, I’m Greta Garbo. He’s running around the country selling the presidency to raise $700 million.”

The Occupy movement has created an opening in which millions of people in unions and organizations like MoveOn are receptive to the idea that only radical changes can solve America’s social and economic crisis. But Dobbs cautions, “We need a resistance movement, not more Democratic Party-aligned advocacy. This kind of relationship needs to be approached with healthy skepticism. There are benefits but also perils because … social movements often wind up in the Democratic Party junkyard. That’s where contemporary feminist organizing has ended up. That’s where civil rights struggles have ended up.” For the Occupy Movement, the question is where it ends up this November.