The date of Occupy's strike has ties to the eight-hour day movement, immigrant workers and American anarchism 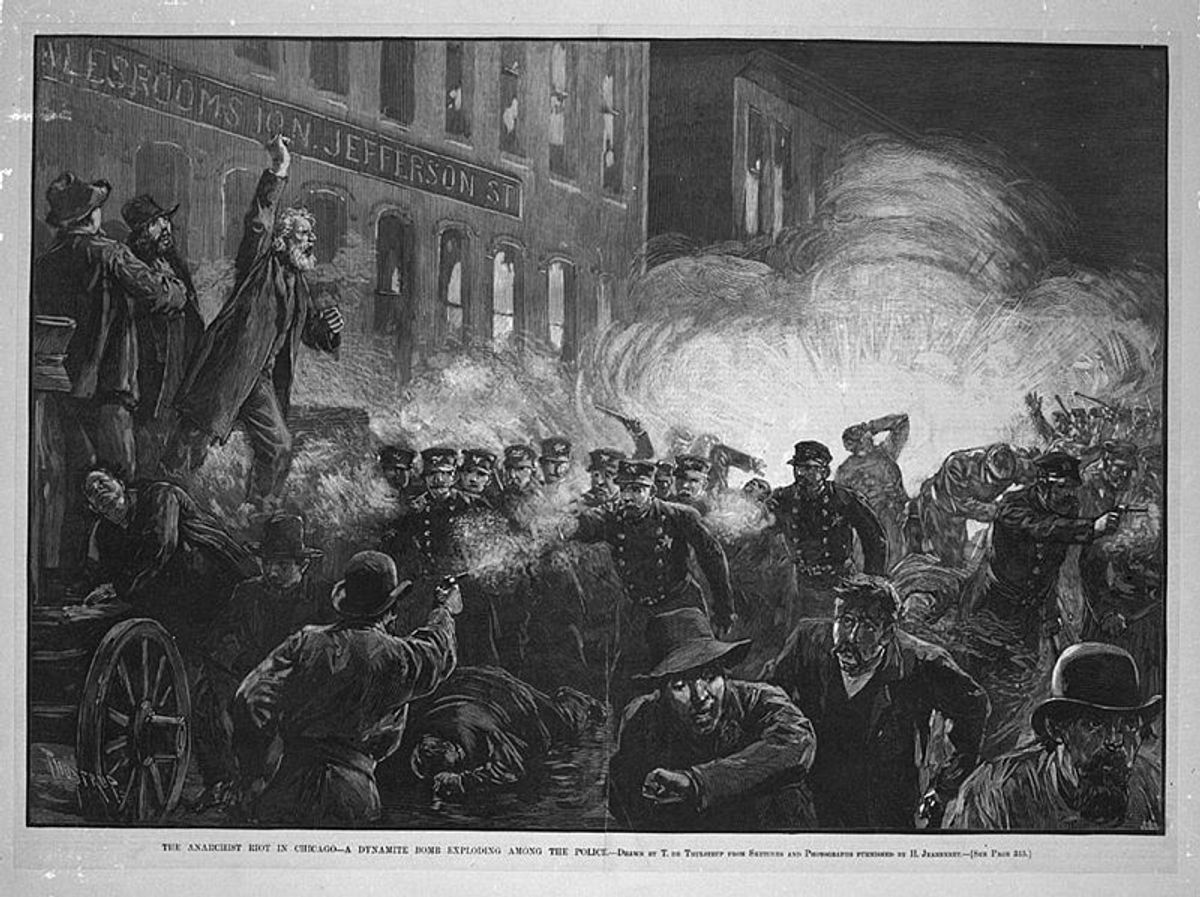 American general strikes—or rather, American calls for general strikes, like the one Occupy Los Angeles issued last December that has been endorsed by over 150 general assemblies—are tinged with nostalgia.

The last real general strike in this country, which is to say, the last general strike that shut down a city, was in Oakland, Calif. in 1946—though journalist John Nichols has suggested that what we saw in Madison, Wisconsin last year was a sort of general strike. When we call a general strike, or talk of one, we refer not to a current mode of organizing; we refer back, implicitly or explicitly, to some of the most militant moments in American working-class history. People posting on the Occupy strike blog How I Strike have suggested that next week’s May Day is highly symbolic. As we think about and develop new ways of “general striking,” we also reconnect with a past we've mostly forgotten.

So it makes sense that this year’s call for an Occupy general strike—whatever ends up happening on Tuesday—falls on May 1. May Day is a beautifully American holiday, one created by American workers, crushed by the American government incubated abroad, and returned to the United States by immigrant workers.

The history of May 1 as a workers’ holiday is intimately tied to the generations-long movement for the eight-hour day, to immigrant workers, to police brutality and repression of the labor movement, and to the long tradition of American anarchism.

Perhaps the first nation-wide labor movement in the United States started in 1864, when workers began to agitate for an eight-hour day. This was, in their understanding, a natural outgrowth of the abolition of slavery; a limited work day allowed workers to spend more time with their families, to pursue education, and to enjoy leisure time. In other words, a shorter work day meant freedom. It was not for nothing that in 1866, workers celebrated the Fourth of July by singing “John Brown’s Body” with new lyrics demanding an eight-hour day. Agitating for shorter hours became a broad-based mass movement, and skilled and unskilled workers organized together. The movement would allow no racial, national or even religious divisions. Workers built specific organizations—Eight Hour Leagues—but they also used that momentum to establish new unions and strengthen old ones. That year, the Eight Hour Movement gained its first legislative victory when Illinois passed a law limiting work hours.

The demand for an eight-hour day was about leisure, self-improvement and freedom, but it was also about power. When Eight Hour Leagues agitated for legislation requiring short hours, they were demanding what had never before happened: that the government regulate industry for the advantage of workers. And when workers sought to enforce the eight-hour day without the government—through declaring for themselves, through their unions, under what conditions they would work—they sought something still more radical: control over their own workplaces. It is telling that employers would often counter a demand for shorter hours with an offer of a wage increase. Wage increases could be given (and taken away) by employers without giving up their power; agreeing to shorter hours was, employers knew, the beginning of losing their arbitrary power over their workers.

The Illinois eight-hour law was to go into effect May 1, 1867. That day, tens of thousands of Chicago’s workers celebrated in what a newspaper called “the largest procession ever seen on the streets of Chicago.” But the day after, employers, en masse, ignored the law, ordering their workers to stay the customary 10 or 11 hours. The city erupted in a general strike--workers struck, and those who didn’t leave work were forced to by gangs of their colleagues roaming through the streets, armed with sticks, dragging out scabs. After several days of the strike, the state militia arrived and occupied working-class neighborhoods. By May 8, employers and the state they controlled had won, and workers went back to work with their long hours. The loss of the eight-hour-day movement led also to a massive decline in unions, and the labor movement would not pick up in such numbers for almost two decades.

The Illinois law and its defeat, however, were not forgotten. By the 1880s, a new labor movement had grown up in Chicago. This one was more radical and was dominated by immigrant workers from Germany. They remembered 1877, when a strike by railroad workers spread around the country. For a brief moment, as strikers took control of St. Louis and Pittsburgh, staring down the national guard and local police, nobody knew what would happen. But President Rutherford B. Hayes called out the army and brutally repressed the strike. They also remembered the state was rarely if ever on the side of the worker. Yet they also remembered the brief shining moment when it appeared that there might be an eight-hour day.

So in 1886, the Chicago Central Labor Union again demanded an eight-hour day. Led largely by anarchists like August Spies and Albert Parsons, this renewed movement demanded “eight for 10”--that is, eight hours’ work for 10 hours’ pay. Throughout the winter of 1886, they successfully organized and won a series of small victories, largely in German butchers’ shops, breweries and bakeries, where owners agreed to recognize unions and grant shorter hours. Then they issued a new demand: that again on May 1, Chicago would go on a general strike and not return to work unless employers agreed to an eight-hour workday.

The demands of the militant Chicago anarchists coincided with a massive upswing in other militant movements. Workers and Texas farmers were rebelling against a monopolistic railroad system. The Knights of Labor were rapidly organizing and spreading their vision of a cooperative, rather than capitalistic, society. “What happened on May 1, 1886,” writes James Green, the most recent and most accessible historian to have written about it, “was more than a general strike; it was a ‘populist moment’ when working people believed they could destroy plutocracy, redeem democracy and then create a new ‘cooperative commonwealth.’”

Four days later, it all came crashing down. On May 3, police had shot to death six strikers at the McCormick Works, where a long-standing labor dispute had turned the factory into an armed camp, and beaten dozens more. On May 4, anarchists held an outdoor indignation meeting at a square called the Haymarket to protest the police murders. Anarchist leader Samuel Fielden was wrapping up his speech when the police, led by the same inspector who had led the charge at McCormick the night before, moved in to disperse the crowd. “But we are peaceable!” Fielden cried, and just then somebody wasn’t. Somebody threw a bomb at the police, the police open fire, and the course of American history changed.

To this day we do not know, nor will we likely ever know, who threw the bomb. Some say it was an agent provocateur. Some say it was an anarchist. If it wasn’t an anarchist, it surely could have been, since there were indeed anarchists who made bombs and would have thrown one given the opportunity. But we also know that many of those who died that night, including police, were felled by the police bullets.

We also know that the effect of the Haymarket bombing was far greater on the labor movement than it was on the police. Eight anarchist leaders were rounded up and put on trial for the murder of a police officer. No evidence was ever given that any of them threw the bomb, and only the flimsiest evidence was presented that any of them were remotely involved. All eight were convicted, and seven were sentenced to hang. Two of these had their sentences commuted, and a third—Louis Lingg, undoubtedly the most radical and militant of them—cheated the hangman by chewing a detonator cap and blowing off his jaw. The remaining four—August Spies, Albert Parsons, Samuel Fischer, and George Engel—were hanged on November 11, 1887. They went to their deaths singing the Marseillaise, then an anthem of the international revolutionary movement, and before he died, Spies shouted out his famous last words: “The time will come when our silence will be more powerful than the voices you strangle today.”

Before that happened, the state ensured more silence. The strike collapsed. Police around the country raided radicals’ homes and newspapers. The Knights of Labor never recovered. In the place of the radical industrial labor movement of the mid-1880s rose the American Federation of Labor, the much more exclusive and conservative organization that would dominate the labor movement until the 1930s. Meanwhile, it would take until the Fair Labor Standards Act of 1938 to finally enshrine the eight-hour day into federal law.

May 1 would live on, mostly abroad. In 1889, French syndicalist Raymond Lavigne proposed to the Second International—the international and internationalist coalition of socialist parties—that May 1 be celebrated internationally the next year to honor the Haymarket Martyrs and demand the eight-hour day, and the year after that the International adopted the day as an international workers’ holiday. In countries with strong socialist and communist traditions, May 1 became the primary day to celebrate work, workers and their organizations, often with direct and explicit reference to the Haymarket Martyrs. May Day remains an official holiday in countries ranging from Argentina to India to Malaysia to Croatia—and dozens of countries in between.

Yet in the United States, with some exception, the workers’ tradition of May 1 died out. Partially this was because the Knights of Labor had already established a labor day in September. Opportunistic politicians, most notably Grover Cleveland, glommed onto the Knights’ holiday in order to diminish the symbolic power of May 1. In 1921, May Day was declared “Americanization Day,” and later “Loyalty Day” in a deliberately ironic attempt to co-opt the holiday. Even that was not enough, though, and in 1958 Dwight Eisenhower added “Law Day” to the mix, presumably a deliberate jibe at the Haymarket anarchists who declared, “All law is slavery.” Today, few if any Americans celebrate Loyalty Day or Law Day—although both are on the books—but the origins of May Day are largely forgotten. Like International Women’s Day (March 8), which also originated in the U.S., International Workers’ Day became a holiday the rest of the world celebrates while Americans look on in confusion, if they notice at all.

Yet May 1 lives on, and indeed has been rejuvenated in the United States in the past few years. In 2006, immigrant activists organized “a day without an immigrant,” a nationwide strike of immigrant workers and rallies. It was perhaps the largest demonstration of workers in United States history. These immigrants, mostly from Latin America, had brought May 1 back to its birthplace, and in so doing they resurrected its history as a day specifically for immigrant workers.

It is appropriate that when the Occupy L. A. first issued its call for a general strike this May 1, it said the strike was “for migrant rights, jobs for all, a moratorium on foreclosures, and peace.” The order was significant, for migrants in the United States have been the ones who have made sure that the voices the state strangled that November day have remained so powerful. And regardless of what happens on Tuesday—and of course an actual general strike, in which cities grind to a halt and workers control what activities occur, is unlikely—we can, through a national day of action for the working class, work toward a new cooperative commonweath. We have a opportunity now to create and renew the labor movement, through new tactics, but ones that pay homage to the generations that preceded us.