No one gets lucky at Washington's prom 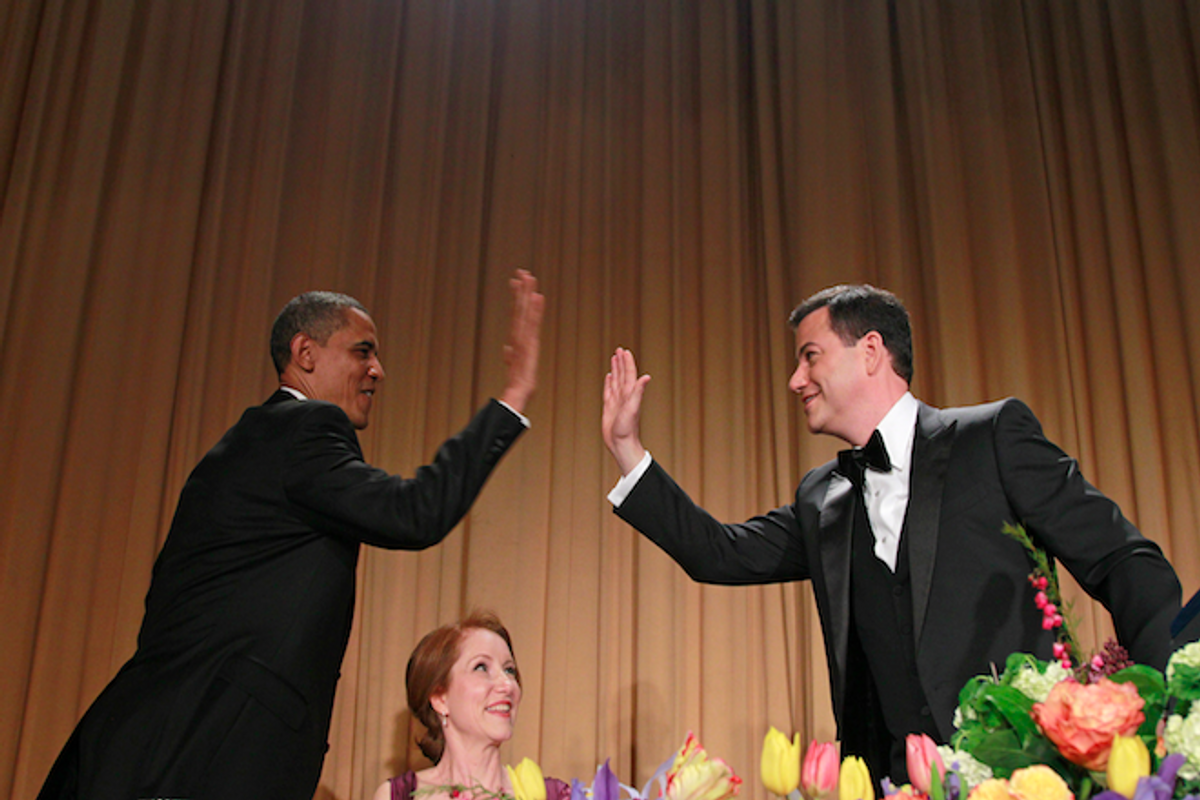 Every year the White House Correspondents' Dinner inspires two competing varieties of coverage: celebrity-obsessed fawning and angry tirades about how it represents everything twisted about our broken democracy. It doesn't, really. The majority membership of the House Financial Services Subcommittee on Oversight and Investigations is a much better example of how awful and broken our democracy is. The Washington Post editorial page better illustrates how worthless and co-opted our establishment press is. Yes, it's an event where vile war criminals like Henry Kissinger are feted and celebrated, but you know where else vile war criminals like Henry Kissinger are celebrated? Literally everywhere they go. The Correspondents' Dinner is just an awkward roast preceded and followed by depressing parties.

The evening is a result of the fact, feature or bug, that our nation's capital is located well outside our nation's media, entertainment and financial capitals, forcing those who call the political capital home and consider themselves terribly important to prove their importance by tricking actual famous and important people into attending a party much lamer than a random Wednesday night back where they live. It's an anachronistic celebratory dinner for the D.C. political journalism industry that became a TV event, or pseudo-event, completely disconnected from journalism. (The journalists don't even go to the dinner. No media outlet would waste an expensive seat on a measly reporter.)

They call it Nerd Prom, which is not remotely accurate. Political journalists, socially inept or no, are not nerds. Most of them can't do math, a fact that campaigns and politicians regularly exploit.

This year, the president delivered some funny jokes about how he once ate a dog. He killed. (Do other democracies do this? I'm honestly asking. Does Australia's PM have to deliver a stand-up routine to a frigid crowd of media executives and Australian soap opera stars once a year?) Jimmy Kimmel, the professional entertainment, did his best with pretty good material and a cold crowd. (The crowd always fawns over the president's routine and nearly always greets the professional comedian with stony silence, because the comedian is an interloper. This is part of what happened to Stephen Colbert in 2006.) There are people who are thrilled that the comedian made jokes about the president and people who are mad that the comedian didn't make enough jokes about the president.

Then came the after parties, which are why people in Washington actually get excited for this thing. The bit you see on TV doesn't actually matter, to anyone. The only reason anyone rents a tux is for open bars and chances to look or maybe even talk to famous people. The Bloomberg Party and the Vanity Fair Party helpfully merged a while back, making that the party for officially important people to brag about getting into. Even if you, professionally, hate politics and politicians and think D.C. should be blasted off the face of the earth or at least paved over and replaced with a giant toll road to a charter school, it is fun to see famous people and drink drinks. (And R.I.P. Christopher Hitchens, that bomb-throwing iconoclast who always held the hippest party of the White House Correspondents' Dinner.)

Michael Dolan wrote a very early version of the gimlet-eyed take on the dinner and the scene that surrounds it, in a 1992 Washington City Paper story that Jack Shafer recently republished at his site. The dinner was in the midst of morphing from a sort of private little party for the D.C. media elite to cozy up with sources into the vaguely national television event it is today:

For years, the crowd consisted mainly of faces known only to those who covered them, but that has changed with the infusion of massive amounts of celebriticity. In the mid-'80s, newsrooms with a self-promotional bent began pitching correspondents' dinner invites at folks with no association to the news except a desire to be in it.

Now that's what everyone does. Greta Van Susteren this year invited Lindsay Lohan and Fox News itself invited Kim Kardashian, as if to prove just how much contempt they have for all of us. The New Yorker has lately begun inviting celebrities who straddle the line between hip and overexposed. (Last year: Jon Hamm, Zach Galifianakis, the Coen brothers. This year: Fred Armisen, Carrie Brownstein, Jason Schwartzman and Aziz Ansari.) The New York Times has wisely avoided the dinner since 2007.

The celebrity invitee arms race is the most degrading element of the entire spectacle. C-SPAN's valiant attempt to serve the public by holding a camera up to Washington once again had the unintended consequence of making Washington even more insufferable.

It would probably save everyone a lot of embarrassment if they just canceled the damn thing forever, but then Washington reporters would never have a chance to be in the same room as George Clooney, and that is really what gets them up in the morning.