"War on women" isn't over 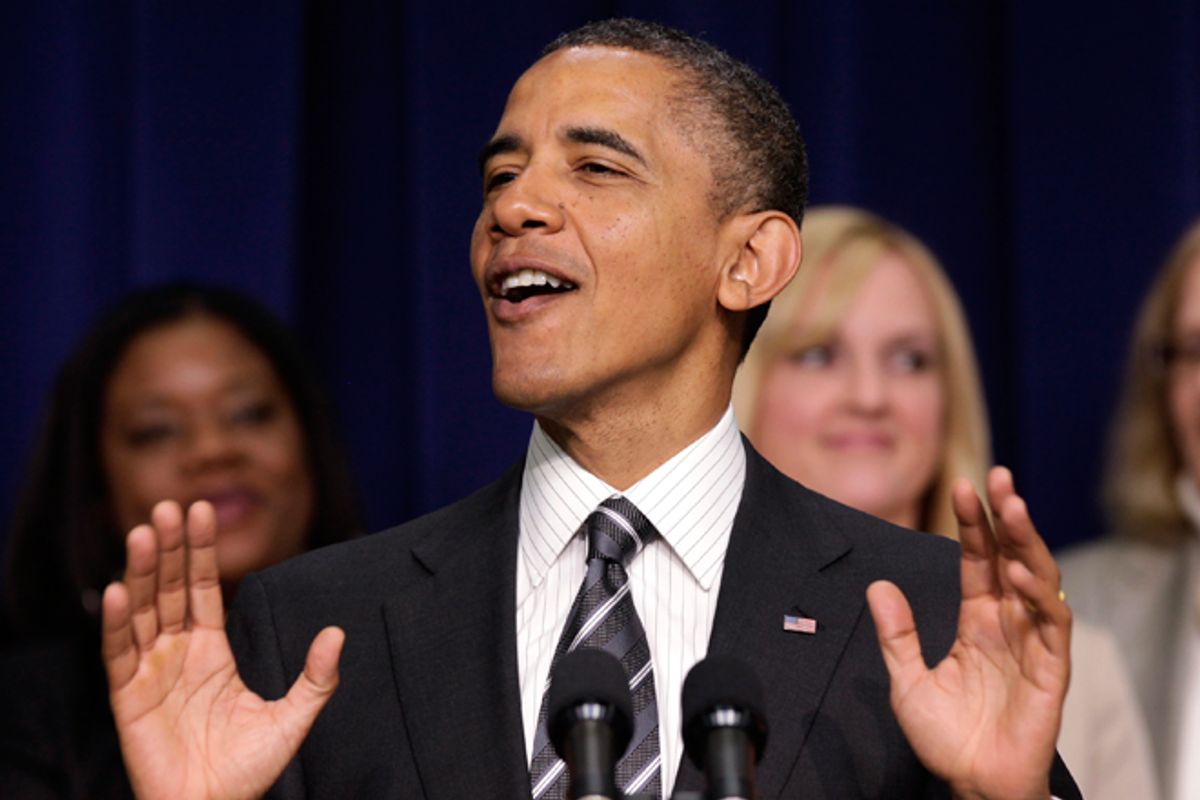 On Friday, President Obama did something that, to my recollection and ability to track online, was unprecedented: He condemned a state-level abortion restriction.

"Now we’ve got governors and legislatures across the river in Virginia, up the road in Pennsylvania, all across the country saying that women can’t be trusted to make your own decisions,” he said at Friday’s Women’s Leadership Conference, the second time this month the president has addressed a specifically women-focused event. “They’re pushing and passing bills forcing women to get ultrasounds, even if they don’t want one. If you don’t like it, the governor of Pennsylvania said you can 'close your eyes.' It’s a quote. It’s appalling. It’s offensive. It’s out of touch. And when it comes to what’s going on out there, you’re not going to close your eyes. Women across America aren’t closing their eyes. As long as I’m president, I won’t either.” That same quote from Pennsylvania’s Tom Corbett, prominently linking him to Mitt Romney, ended up in an attack video the campaign released the same day that called Romney “extreme on women’s issues.”

That a president who has traditionally stayed on the sidelines of abortion debates would consider them safe waters to jump into shows how far the paradigm has changed.  As I’ve written here before, state laws requiring ultrasounds before abortion used to be the layup of incremental abortion restrictions -- they’ve been passing quietly in conservative states for over a decade. There was nothing particularly novel about the one that eventually became law in Virginia in non-specifically-transvaginal form -- what was novel was the level of attention and outrage. (In Pennsylvania, popular outrage helped kill the bill that Corbett was supporting.) Yes, this is rallying the base, but given how Republicans were only too happy to jump into the contraceptive mandate debate -- no, to wallow in it, slut-talk and all -- Obama had plenty of less controversial material to choose from.

Of course, the president didn’t go all out in his support of reproductive freedom -- he didn’t mention the word “abortion,” just as he hadn't in his otherwise full-throated video defense of Planned Parenthood (though, to be fair, he was talking about maintaining federal funding to the organization, none of which goes to abortion). But for a man who less than six months ago was talking about how limiting access to emergency contraception was “common sense,” it was positively a sea change.

On April 12, Slate political reporter David Weigel declared the death of “the war on women” as a Democratic talking point. Republicans thought they drew blood in the Ann Romney/Mommy wars kerfuffle and a Democratic National Committee flack clumsily told Weigel, “I'm not a fan of the term,” and claimed that “we in the DNC have not been running a campaign based on the term ‘war on Women.’ That's a myth cooked up by Republicans.” But terminology aside, it’s clear from the past few days that the Democrats aren’t done courting (or cementing) the female vote through Republican attacks on reproductive rights, pay equity or benefits disproportionately used by women.

A general-audience video released by the campaign today touts the contraceptive coverage mandate with the lines, "Contraception coverage? Guaranteed.” Meanwhile, the Romney campaign is still trying to turn questions about women voters away from reproductive rights and toward a generalized economy question, with Romney advisor Ed Gillespie proclaiming on "Meet the Press" yesterday,“The U.S. economy is a hostile workplace for women under President Obama ... It’s still the economy, and women aren’t stupid.” Obama advisor Robert Gibbs responded, “I don't think we want to to go back either to eight years ago or, quite frankly, 30 or 40 years ago, whether it's the economic decisions that women have to make or the healthcare decisions that women have to make. I think there's a clear contrast.”

There is. And if there's a second Obama term -- quite possibly won on the votes of women -- will that contrast outlast the election season opportunism? The answer will partly depend on how much reproductive rights and women's groups press their current advantage and push the paradigm even further.