Women still face pay bias, no matter how much (or how disrespectfully) GOP flacks want to deny it 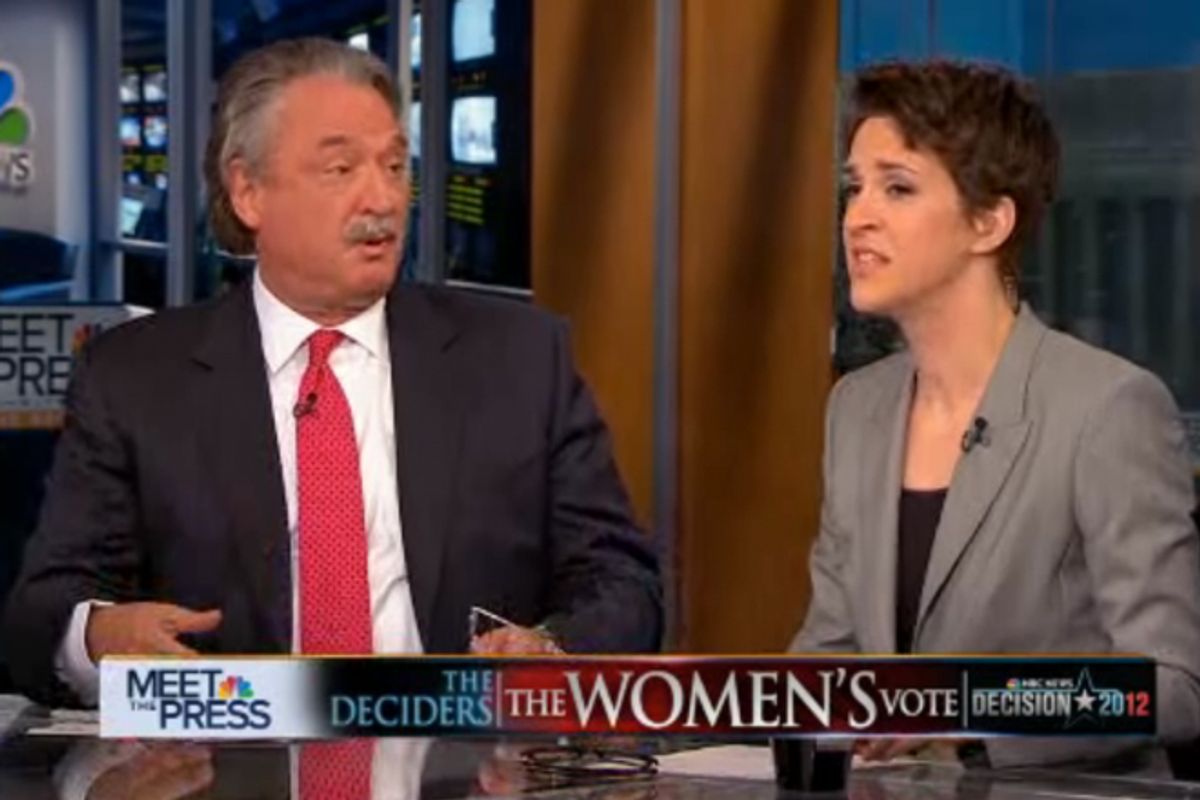 Alex Castellanos and Rachel Maddow on "Meet the Press"
--

I'm thrilled that Rachel Maddow has her own show, but I still sometimes miss her as a news-show guest. Maddow the guest always brings the facts, usually with charm, and sometimes with an edge of outrage at the behavior of her conservative sparring partners. As the host, she has to stick to charm (while still well-armed with facts) on the rare occasion she gets Republican guests on her show.

Her "Meet the Press" debate with Alex Castellanos Sunday was one for the ages. The Republican who defended calling Hillary Clinton a "white bitch" in 2008 ("Some women, by the way, are named that, and it's accurate," he told CNN's Jeffrey Toobin) tried to confound Maddow with divergent claims about whether women are paid less than men – "actually no," he insisted; then he admitted they are, but there are reasons for it. And when he couldn't confound Maddow, he condescended.

"I love how passionate you are," he told her, all but patting her on the head. "I wish you were as right about what you’re saying as you are passionate about it. I really do." Maddow shot back: "That’s really condescending. This is a stylistic issue. My passion on this issue is actually me making a factual argument on it."

I wasn't watching at the time, but I saw Twitter and Facebook erupt in joy at the way Maddow had smacked down the serial sexist Castellanos. You've got to watch it. The Democratic Congressional Campaign Committee has posted it at a website, "Rachel Is Right."

Maddow is right: The Census Bureau reports that in 2010, women made 77 cents for every dollar men did. But disrespect aside, Castellanos' talking points are widely used on the right, and worth dismantling. His core argument was simple: "Men work an average of 44 hours a week, women work 41 hours a week. Men go into professions like engineering, science and math that earn more. Women want more flexibility."

Of course, if the pay gap was only about hours worked, using Castellanos' data it ought to be about 6 percent, not 23 percent. His "women want more flexibility" argument is a euphemism for the fact that women pay dearly for the time they spend at home with their kids – which, remember, according to the Romneys, is the most important job in the world!

In some cities, and some professions, single women in their 20s who don't have kids actually make more than their male peers. The American Association of University Women, which works hard for pay equity, found that the wages of college-educated women only lag 5 percent behind men in their first year out of school. But the wages of men quickly begin to outpace women in comparable fields – 10 years out, AAUW found, women with college degrees face a 12 percent pay gap -- at least partly because of their responsibility for children. They pay a clear price for that responsibility: Mothers who leave the workplace for as little as three years return to make only 60 percent of their former salary. That doesn't deny or excuse the wage gap, it just points to more subtle forms of gender discrimination to explain it.

But it was good to hear Romney surrogates proclaim that women are doing as well as men in the workplace: I guess they're conceding their candidate lied when he claimed for weeks that the Obama administration has disproportionately hurt women, and that 92 percent of job losses under Obama hit women. Maddow noted the hypocrisy: “Now we know, at least from both of your perspectives,” she told Castellanos and Rep. Cathy McMorris Rodgers, R-Wash., “women are not faring worse than men in the economy, that women aren’t getting paid less for equal work.” Unfortunately, Ed Gillespie didn't get the memo – earlier on "Meet the Press" he claimed that "The U.S. economy is a hostile workplace for women under President Obama … It’s still the economy, and women aren’t stupid."

It's undeniable that Romney and the GOP support policies that disproportionately hurt women. They want to cut back the Earned Income Tax Credit for low-wage workers; most recipients are women. They want to slash Medicaid, Medicare and Social Security; women make up most of those programs' beneficiaries, too. To the extent that they, as well as GOP governors, are pushing public worker layoffs, those hit women harder too, since they're more likely to work in the public sector than men.

But beyond the facts of her argument, it was great to see Maddow stand up to Castellanos. It still shocks me how much disrespect men get away with in debating women on TV. I certainly enjoyed Dick Armey telling me he was "so damn glad" he didn't "have to be married to me," and Ohio Gov. John Kasich telling me "control yourself" in a debate over his work for Lehman Brothers (one in which he was far more flustered than I was). It's very hard to reply in the moment and not come off as either angry or flustered; Maddow's fiery grace was a pleasure to see.