"Words Like Loaded Pistols": The not-so-lost art of rhetoric

A new book celebrates the power of persuasion, from ancient Greece to Barack Obama 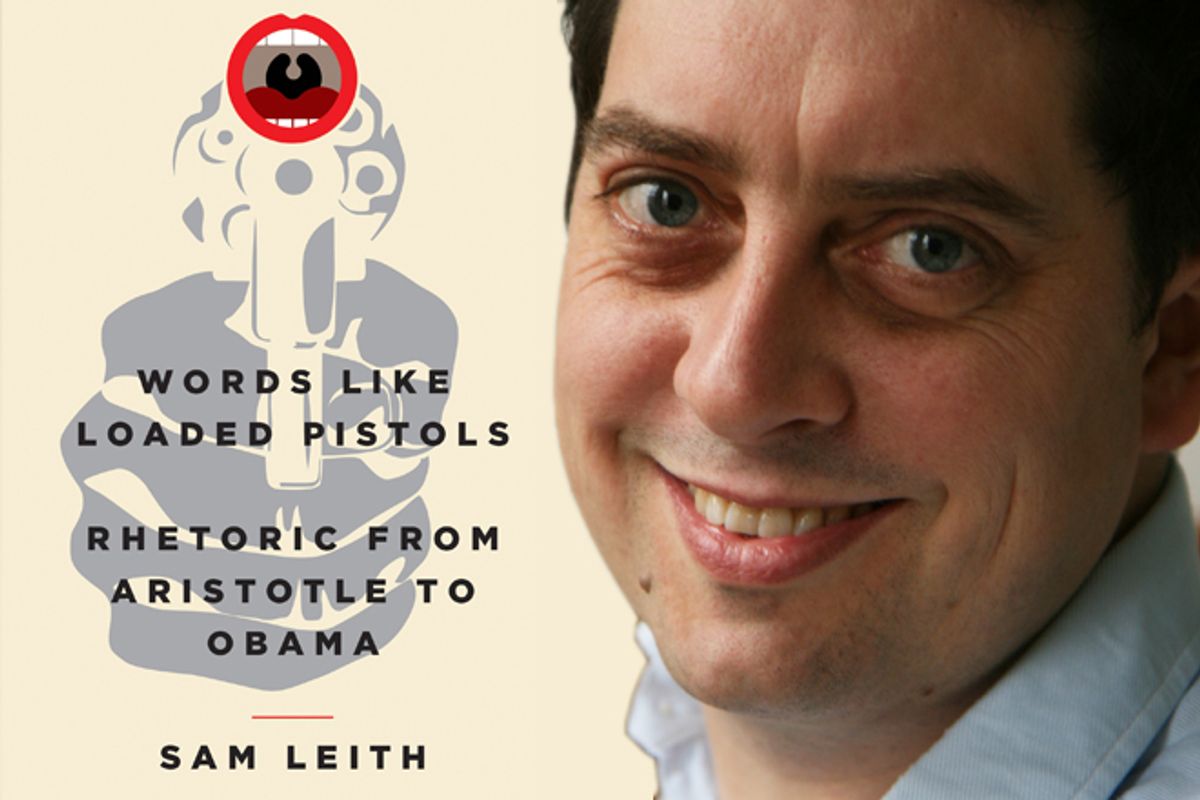 When people use the term "rhetoric" these days, they usually mean empty language -- be it high-flown or spoken in high dudgeon. A few may think of rhetoric as a deadly classical discipline devoted to the exhaustive parsing and labeling of figures of speech: zeugma, anyone? Yet as Sam Leith points out in his delightful and illuminating "Words Like Loaded Pistols: Rhetoric from Aristotle to Obama," we live in the most rhetorical era in human history, surrounded by and embroiled in argument, enticement, invective and panegyric wherever we turn.

The Greeks and Romans studied and scrutinized rhetoric so intently because they understood it to be the very stuff of power, specifically the power of persuasion -- which, as Leith points out, is even more potent today than it was in the fourth century BC, when Aristotle produced the first treatise on the subject. The master's "Rhetoric" is a work which (unlike much of his scientific writing) remains as useful today as it did in ancient Athens; Leith sprinkles shrewd tips from it (such as, construct your argument so that your audience thinks it's their own idea) throughout his book. "He was the first person," Leith writes of Aristotle, "really to grasp that the study of rhetoric is the study of humanity itself."

Rhetoric is also, to be blunt, the art of talking people into things, and it flourishes in courtrooms and on campaign trails, in singles bars and television commercials, over dinner tables and in Internet forums. Leith, a British journalist and novelist, wants to revive the formal appreciation of rhetorical technique, but he acknowledges that today it's precisely when we are most aware of rhetorical skill that we condemn it. If Barack Obama won the presidency largely on his strengths as an orator (a testimony to rhetoric's importance if there ever was one), that same eloquence has become a stick to beat him with in the hands of his critics. Rick Santorum is typical in dismissing Obama "just a person of words." "It seemed," Leith writes of the 2008 election, "that though we expected politicians to make speeches, we didn't like them to be too good at it."

This isn't precisely true; Obama's supporters celebrate his speechmaking. But the potshots do illustrate the contemporary ambivalence toward smooth-talking of any kind. Whereas the ancients admired rhetoric as a consciously mastered skill, we prefer (we think) people who speak "from the heart" -- if not quite spontaneously, then at the very least approximating a free outflowing of their supposedly true selves. To appear to have thought too much about what you're saying, to be obviously conscious of it as a performance, is to seem insincere. No wonder the study of rhetoric per se has fallen by the wayside.

But of course, as Leith also points out, "being anti-rhetoric is, finally, just another rhetorical strategy." "Words Like Loaded Pistols" sports a fabulous assortment of examples of time-tested rhetorical gambits in action. Exhibit A for "anti-rhetorical rhetoric" is Sarah Palin's taped television address following the 2011 shooting of Rep. Gabrielle Giffords and 13 others in Arizona. The lunatic gunman, some observers felt, had been egged on by the paramilitaristic language and imagery of right-wingers in general and Palin's own website in particular. Leith breaks down Palin's statement using classical rhetorical terminology, but he also holds it up as an illustration of the ironic paradoxes of anti-rhetoric. "The way she chose to defend herself against trial by media was through the media; while denying that words could be held responsible for inciting hatred and violence, she asserted that media reporting on her" was inciting hatred and violence.

In further case studies, Leith examines the rhetorical technique of everyone from Eminem and "South Park" to Frederick Douglass, the courtroom combatants in "A Few Good Men," Richard Nixon and his famous Checkers speech and Earl Spencer in the eulogy for his sister, Princess Diana. Interstitial chapters highlight "Champions of Rhetoric": Abraham Lincoln, Winston Churchill, Cicero and Martin Luther King Jr., etc. (not excepting Hitler, because whatever else can be said about the man, he knew how to fire up a crowd).

Although this greatest-hits element is key to the appeal of "Words Like Loaded Pistols," Leith also provides a brisk overview of rhetorical principles and terms -- the latter of which, in tongue-twisting Greek and Latin, many readers will promptly forget. (It is amusing to learn that the lyrics to the Carpenters' "Close to You" present a textbook specimen of hypophora.) However obscure the terminology may seem to modern readers, however, the thinking underlying it is rock solid.

And to judge by much of the public speaking and ostensibly persuasive writing one sees these days, it's also woefully neglected. "Words Like Loaded Pistols" isn't a how-to book, but chances are that anyone who reads it will acquire a trick or two. Many a catastrophic best-man toast or limping pitch meeting demonstrates the need for a better understanding of the elementary guidelines laid down well over 2,000 years ago: Know your audience and strive to portray yourself as one of them; adjust your style to the tenor of the occasion; consider starting with a tactical concession; and so on. The marvel is not that the old techniques still work, but that we ever persuaded ourselves that we could do without them.

Books History What To Read