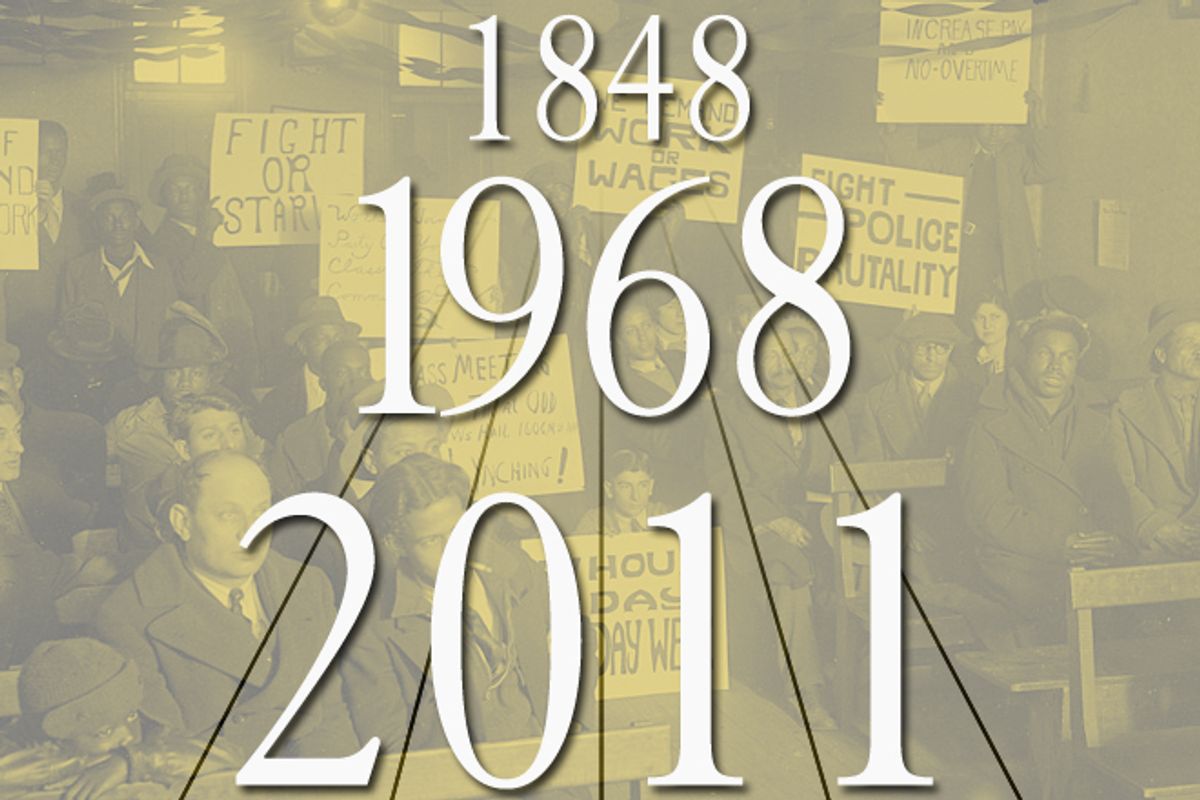 This article is excerpted from "Occupy Nation," available on May 1 from all e-book retailers.

Vast changes do not neatly follow the calendar, but it is already possible to say that the year 2011 was, as Anthony Barnett writes, “original.”

Not completely so, of course. As in 1848, 1968, and 1989, the insurgencies were many and they absorbed multitudes. As in all three, the protagonists were chiefly young. As in all three, the holders of power felt various degrees of panic. As in 1848 and 1968, they took place on more than one continent. As in 1968 and 1989, the insurgents were largely nonviolent, until the uprising in Libya. As in 1968, the targets were multiple, the identities of the movements alternately seductive and repellent in the eyes of outsiders, and often confusing.

The grandest originality was that in contrast to 1848’s uprisings across Europe and Latin America in behalf of nationalist and republican values against absolutist government and economic impoverishment, 2011 was chiefly nonviolent. The second, of course, is in the electronic means of communication: the smartphones, videos, social network and other internet linkages that sent the horrific images of the self-immolated Mohammad Bouazizi and his funeral procession flying throughout Tunisia; then the photograph of the mutilated face of the twenty-nine-year-old Egyptian businessman from Alexandria, taken in the morgue by his brother, around which formed the momentous Facebook page posted by the Google executive Wael Ghonim, “We Are All Khaled Said,” circulating throughout Egyptian cyberspace, along with the call to gather in Tahrir Square on January 25, so that cyberspace touched down on earth, and in the flesh, face to face, groups formed, found their affinities, intermingled, sized up their situations. Graphic images have become more graphic and they move faster; they horrify instantaneously. The cascades of images, horizontal contacts, and related events have sped up enormously. But this most visible of differences from past revolts can be exaggerated. Before there were online videos, there were gossip networks, secret societies, broadsides, posters, leaflets. The sluggishness of the past is an illusion. So is the isolation of history-makers from one another.

So is the inevitability of liberation, at least in any conceivable short run. In 1848, the revolts were crushed, and resulting reforms scanty. In 1989, Mikhail Gorbachev’s reforms ignited Central and East European revolts that the Communist apparatus could not contain, though the Chinese, willing to open fire, could and did.

The year 2011, as Anthony Barnett observes, saw an extraordinary discrediting of political-economic elites on both sides of the Atlantic: “The two fundamental ideological pillars of the North Atlantic order, that it keeps the peace and that it delivers wealth for all, are clearly broken.” (Or actually, in the words of one OWS sign observed in Albany, New York: “The system isn’t broken. It’s fixed.”) It wasn’t that bread was no longer baked and streets no longer cleaned (some of the time, anyway), but that damage from the crash of 2008 continued to rain down from the commanding heights. Vast hurts were not undone and structural instabilities were not remedied. Once again, Anglo-American financial leadership embraced market fundamentalism, precisely the ideological regime that had produced the crash in the first place. “When the bubble burst,” Barnett writes, “this exposed the political system as a ‘post-democracy’ that answers to corporate power.” The moral authority of both political and economic elites was at low ebb.

So was the efficacy of state violence, as American troops left Iraq, mission unaccomplished. Both Osama bin Laden and the war on terror expired in 2011. In the Arab world, Barnett observes, “The abject failure of terrorism and its evident pointlessness and monstrosity. . . opened the way to peaceful, popular uprisings,” It is poetic—but not only poetic—justice that Zuccotti Park, the center of an extraordinary social invention, is a stone’s throw from the site of the momentous destruction of the World Trade Center. And it was not only bin Laden’s achievement as “hooligan of the absolute” (Tom Nairn’s phrase), but George W. Bush’s “mad logic” of “hugely inflating the significance of its enemy” that was discredited, along with the tyrannies that were supposed to hold the fort in North Africa. “The ‘War on Terror’—far from protecting the world or securing US hegemony—proved to be chasing a global chimera,” Barnett adds. “There is terrorism, but it is a very nasty criminal danger not a strategic threat.” The elites’ political capital was much depleted. And in the United States, at any rate, rallies around the flag were no longer capable of smothering opposition.

It would be shallow to see uniformity in the global crisis of legitimacy, or the popular reactions to it. The anti-austerity protests in Greece, Spain, Ireland, and elsewhere have their respective characters and limits. Islamists, who are at least short-term victors in North Africa, do not have equivalents elsewhere. However, it would be equally shallow to expect uniformity, let alone demand it in the old mythic form of “the revolution,” in the singular. Theorists have been proclaiming this the age of late capitalism for decades, but if it is indeed late, it keeps getting later. Capital continues to find new ways to grow, creative destruction and all. We are not witnessing the global Götterdämmerung of the political elites or their institutions. They persist if for no other reason than that no new world is yet emergent within the shell of the old. But it is fair to see 2011 with Anthony Barnett as both politically and chronologically “The end of decade that began with 9/11: from the year of the towers to the year of the squares.”

Reprinted with permission from "Occupy Nation: The Roots, The Spirit and The Promise of Occupy Wall Street" by Todd Gitlin. Published by It Books. 2012.