FBI heroically locks up ridiculous anarchists on May Day 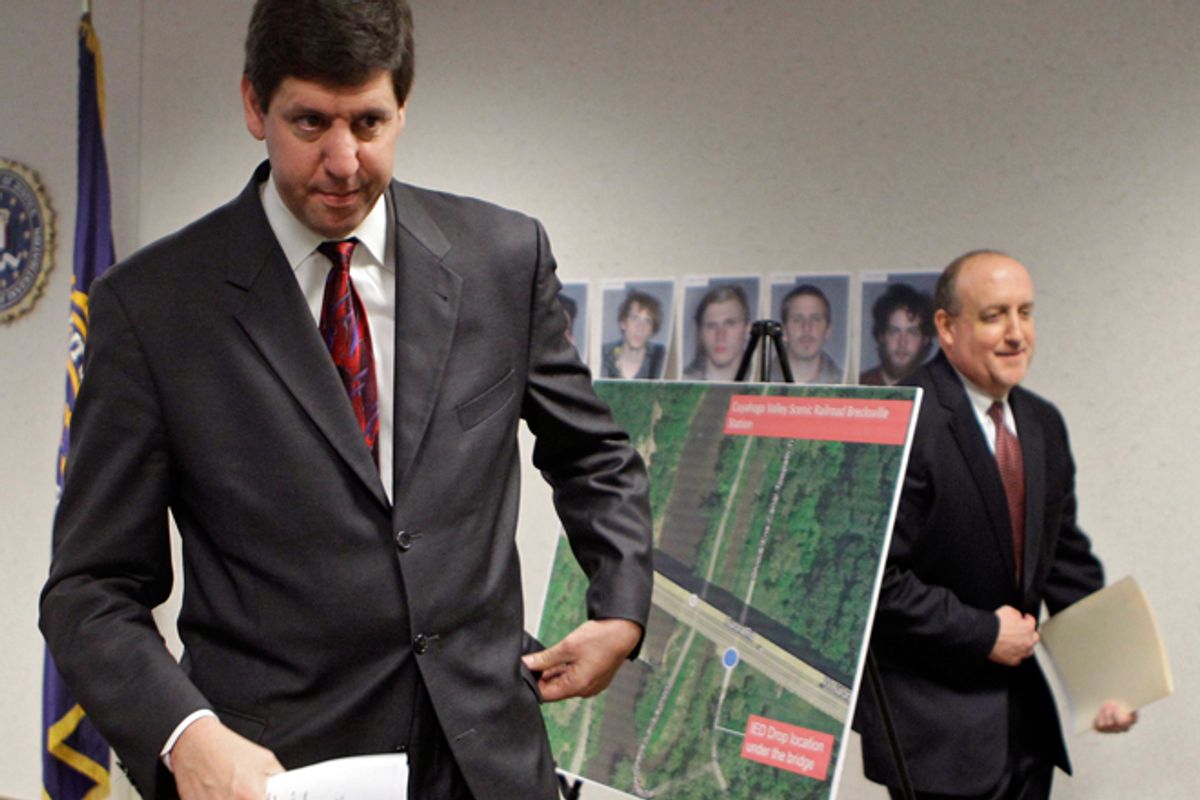 U.S. Attorney Steven Dettelbach, left, and FBI special agent in charge Stephen Anthony walk past a map showing the location of a bridge on Ohio Rt. 82. Five men, pictured on the wall behind the map, have been arrested for conspiring to blow up the bridge. (AP/Mark Duncan)
--

Happy May Day, fellow travelers! If you're not currently disrupting capitalism and/or having your wrists zip-tied for exercising your right to freely assemble, you probably read about the Federal Bureau of Investigation's latest, not-at-all suspiciously timed terror sting. The Bureau, in an inspired bit of early-20th century nostalgia, has railroaded a bunch of dangerous anarchists. (Or "dangerous" "anarchists.") America will not waver in the face of the Galleanist threat!

Five young men from Cleveland are now in jail, accused of plotting to "blow up a bridge in the Cleveland area," according to the FBI's triumphant press release/criminal complaint. As is always the case with FBI terror stings, the "sting" part involved the bureau's informant/agent provocateur mostly inventing the plot the accused have now been arrested for. In this case, the five planned to detonate smoke bombs as a distraction as they "topple[d] financial institution signs atop high rise buildings in downtown Cleveland." But the informant (as usual, a sketchy unnamed character with a checkered past) strongly pushed the group to seriously consider different, more extreme plots. At the end, some or all of them were going to plant C-4 on the Route 82 Brecksville-Northfield High Level Bridge over the Cuyahoga Valley National Park.

So what was initially a political action aimed at financial institutions somehow morphed into a supposed attempt to destroy or damage a piece of publicly owned infrastructure in a national park. Anarchists sure do hate bridges, and parks, I guess. (No parliament of men has the authority to designate which spaces are "national parks"! The whole world is the worker's national park!)

The FBI's affadavit suggests that there was never actually a serious "plot." The gang tossed around the idea of "taking out" a bridge in order to stop people from getting to work, but they also thought maybe they could use their (pretend) C4 on a Klan rally, or a neo-Nazi organization, or an oil well, or the Federal Reserve Bank. They eventually decided to maybe sink a ship. All of their many plans were super serious and well-thought out. ("To prevent capture, he suggested getting tacks that they could throw out of the back of a car if they get in a chase.") Eventually they settled on the bridge thing, sort of, and bought fake IEDs from the guy they already suspected was a cop.

In other words, these are a bunch of dumbasses even by the standards of amateur "black bloc" dumbasses. Do you know how I know these morons weren't serious? They planned to download the Anarchist Cookbook and follow its notoriously awful instructions. Every experienced anarchist knows that the Feds have a mole in your group house, but these guys were mainly concerned with having someone's "hacker friend" explain to them how bitcoins work. Without the FBI's intervention the most damage these idiots would've ever caused is a broken Starbucks window. So thank god they're off the streets, and congrats to the FBI for getting this tale of dangerous, bomb-planting anarchists onto the news broadcasts on the day of Occupy's big May Day action.

(At least the Feds are branching out from only targeting Muslims in these ridiculous "stings." Some day all Americans, regardless of creed or color, will have their circle of friends secretly infiltrated by a paid informant.)