It's starting to look over for Dick Lugar

Welcome to the permanent era of Tea Party politics 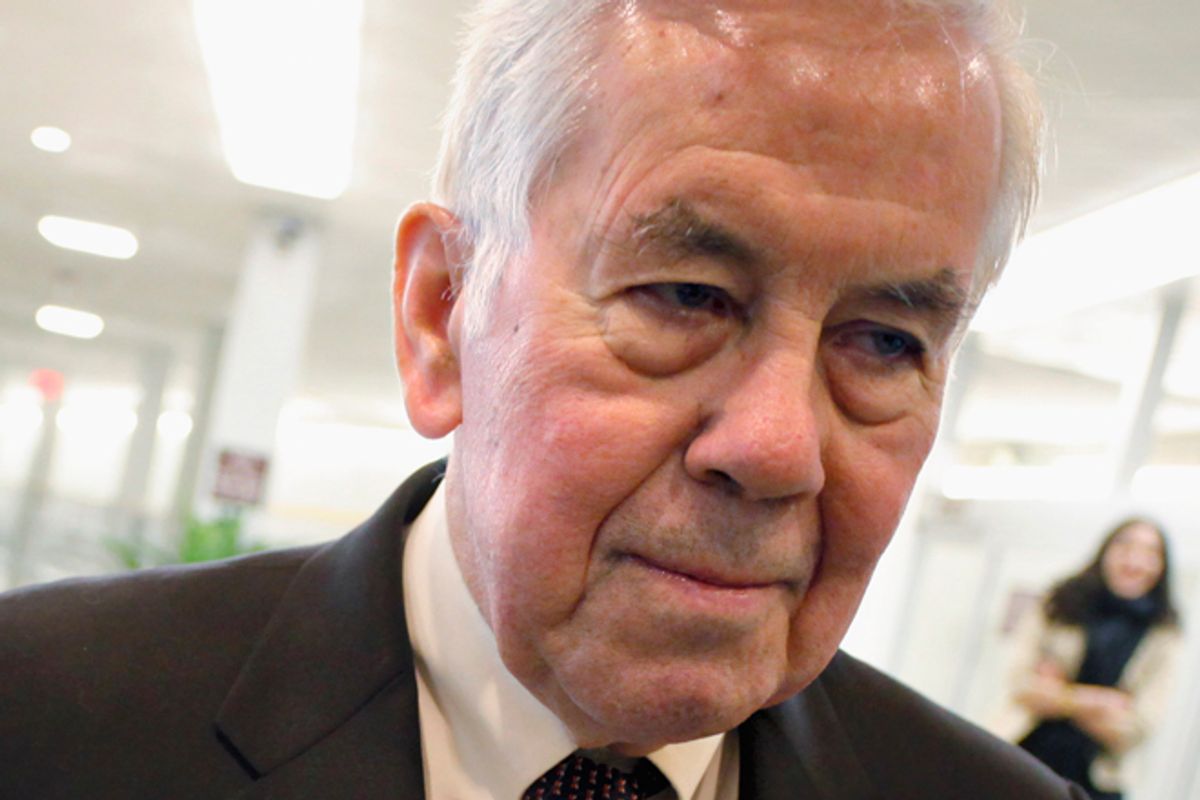 It sure doesn’t look like Richard Lugar is long for the political world. The news that the major super PAC supporting his candidacy is bailing on him a week before the Republican primary reinforces a growing consensus that the six-term Indiana senator will likely be defeated next Tuesday by his conservative challenger, state Treasurer Richard Mourdock.

Under one scenario, this could be a fortuitous development for Democrats, since Lugar, with his broad popularity outside the Republican Party, would probably defeat the Democratic candidate, Rep. Joe Donnelly, with ease. By contrast, Democrats are hopeful they could exploit Mourdock’s Tea Party politics to turn the state’s swing voters against him – as happened with several high-profile Tea Party-backed candidates in 2010.

That said, Mourdock – unlike, say, Christine O’Donnell or Joe Miller -- is an established statewide politician whose public behavior doesn’t easily conform to the image of a kook. And Indiana, even though it narrowly backed Barack Obama in 2008, is a traditionally Republican state that’s expected to land in the Romney column this fall. So there’s a good chance Mourdock will land in the Senate if he prevails next week.

The real significance of a Lugar loss, though, would extend far beyond November. The fact that he’s now fighting for his political life in a GOP primary is a reflection of the endurance of the Tea Party phenomenon. The term itself may feel tired and even dated, a relic from 2009 or 2010, but it’s really just a colorful synonym for “Republican Party base.”  And as Lugar’s perilous standing shows, that base is waging the same kind of purity crusade in 2012 that it did in 2010.

The difference is that there are fewer targets this time around, which makes sense: Dozens of Tea Party-aligned Republicans won House seats in ’10, moving the center of gravity in that chamber about as far to the right as it’s ever been. But the bigger success the Tea Party had in ’10 was that it got into the head of every Republican on Capitol Hill. Watching Republican incumbents like Bob Inglis, Bob Bennett and Mike Castle lose out to little-known – and, in some cases, glaringly unqualified – Tea Party-backed challengers, delivered a clear message to Republican lawmakers: If you stray from our absolutist, compromise-phobic stance even once, you’ll be next.

This is why Republicans in the House have charted such a politically suicidal course since winning back the chamber. Traditionally pragmatic conservatives – including Speaker John Boehner – deferred to the purists for fear of being branded sellouts. The situation wasn’t quite as severe in the Senate (especially with Democrats still holding a majority), but individual Republicans there got the message. Olympia Snowe, before walking away in frustration a few months ago, became a far more reliable vote for conservatives in the Obama era. Orrin Hatch ditched his flair for compromise and became a relentlessly harsh Obama critic; it was just enough to save him (so far) from suffering a humiliating defeat at the GOP’s Utah state convention, as Bennett did two years ago.

There’s been less primary season Tea Party activity this year because there’s been less need for it. Lugar is a bit of an exception. Like most of the Tea Party’s previous targets, “moderate” really isn’t the best word to describe his Senate voting record. He’s a conservative and a generally reliable Republican vote, but he does have an independent streak. And to today’s conservative activists, who demand complete, unyielding ideological purity, that’s not enough. So they decided to make an example of Lugar, and they’re well on their way to succeeding.

The real implications of a Lugar loss next week will be psychological: How will watching yet another prominent Republican with a solidly conservative record lose in a primary affect the mindset of average Republican member of Congress? Chances are, it will make him or her even more resistant to taking any action, big or small, that might possibly be construed as ideologically disloyal.