As strikers clashed with police elsewhere in NYC, thousands of students listened to lectures in Madison Square Park 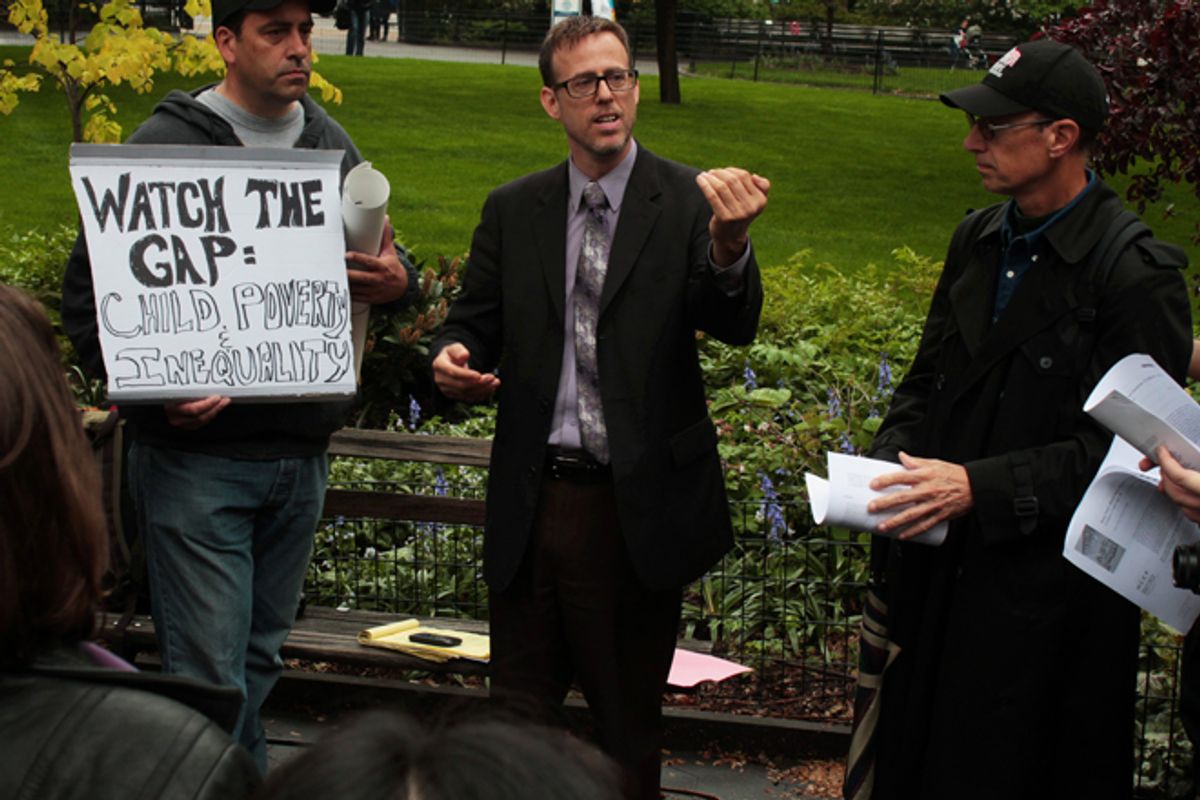 While reports were bouncing around Twitter about vandalism in San Francisco and arrests on New York City's Williamsburg Bridge, birds were chirping in Madison Square Park where perhaps several thousand students (by organizers' estimates) were attending nearly 100 open-air lectures and workshops in an event dubbed "The Free University."

"Very specifically, we're trying to show that to strike doesn't just mean to shut down," said Conor Tomas Reed, a graduate student and organizer who helped pull the educational event together to coincide with Occupy Wall Street's May 1 general strike. The effort came largely out of the once-free City University Of New York (CUNY), where Reed, 31, is an English graduate student and writing instructor. But it also drew in high-end private schools Columbia and NYU (among others).

"I think this a lot of what Occupy is about," said a woman who gave only her first name, Ariel. She is also 31, a grad student and instructor, but at ultra-expensive New York University. "It's not as sexy as marching in the street," she said of the Free University, "But people talking to each other is a pretty radical act."

And she knows of what she speaks. Ariel has been taking part in Occupy Wall Street since "Day One," September 17. Reed, for his part, has been involved since Day Negative 45, as one of the roughly 50 people who made up the very first general assembly on August 2 (where I met him). Ariel, Connor and others feel they have progressed beyond the marching and confrontation to try to build new structures -- also a key goal of the thousand or more artists organizing events for May 1.

The day's curriculum was definitely heavy on Occupy themes, with classes such as "Reading Marx on the Relation Between Human and Political Emancipation" and "Debate Skills to Defeat Conservatism and Defend the Occupy Movement." Others such as "Mass Incarceration in the U.S." hit at some of the many underlying concerns motivating members of the movement. But they were leavened by a smattering of other topics, such as "Ancient Philosophy" and even "Free Yoga."

The program drew a number of prominent thinkers, including Anthropologist David Graeber, another OWS co-founder, as well as journalist and author Chris Hedges. And the organizers want to continue the program beyond May 1. They will repeat much of it tomorrow at Brooklyn college, and, according to Ariel, throughout the summer and into the fall. "I'd like to see this movement grow. And we have all this open space,"she said.