Recipe for a bestselling book

One writer says he's figured out 12 basic ingredients for a blockbusting title. Can the puzzle really be that easy? 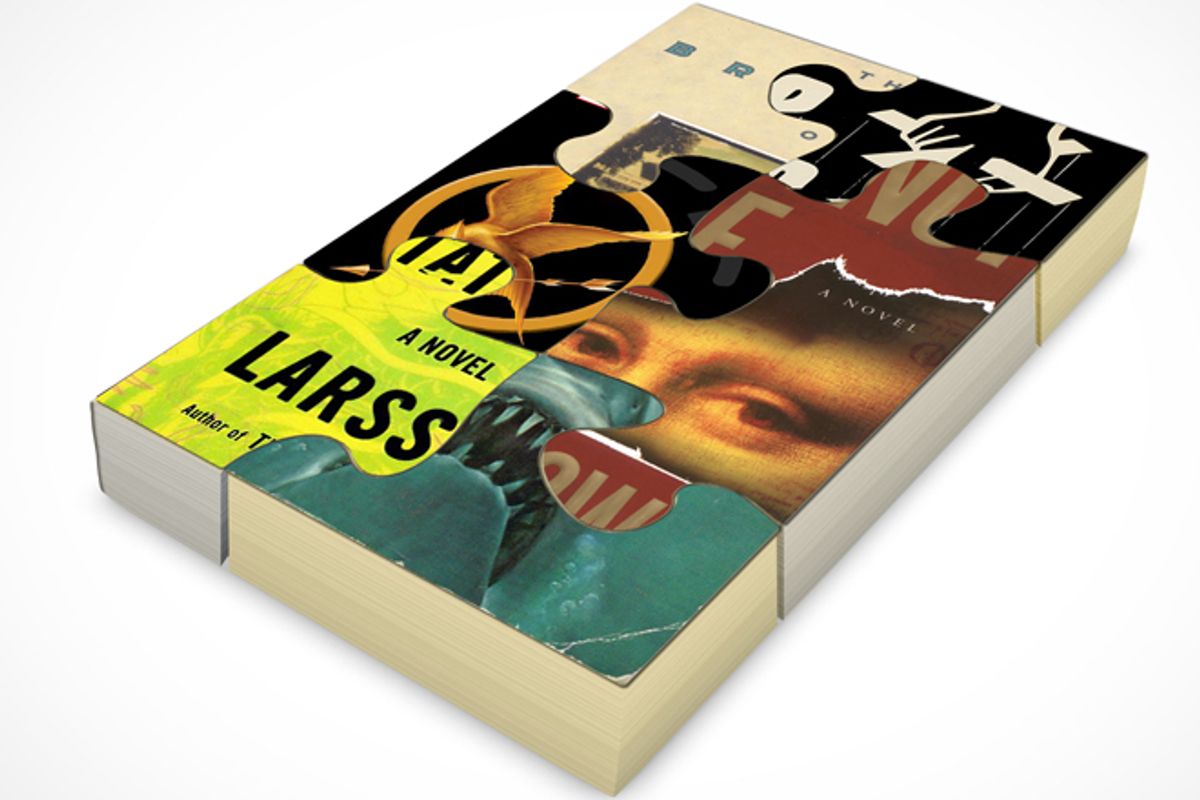 Remember the time you picked up a copy of that big bestseller and tore through the book in a couple of days, marveling at the bad writing, ridiculous plot twists and paper-thin characters? "Is drivel all it takes to sell a gazillion copies and retire to a sleekly spacious modern house in the woods?" you probably asked yourself. "I could crank out better crap than this! How hard can it be?"

The better question is: How easy? For if smart people who have spent their entire careers calculating how to write or publish bestsellers find it impossible to produce a surefire winner -- and they do -- chances are that you and the many, many, many other people who have had the thoughts described above are underestimating the task. Presumably aspiring authors will be the most avid readers of James Hall's new book, "Hit Lit: Cracking the Code of the 20th Century's Biggest Bestsellers," and they may well learn from it. But does this title, the latest attempt to nail down the essential qualities of extremely popular books, actually wrap its fingers around the mystery?

Hall, a creative-writing professor and crime novelist, teaches a course on "megabestsellers," books that have sold in the "multiple millions" and that have gone on selling for decades after they were originally published. He considers a list of 12: "Gone With the Wind," "Peyton Place," "To Kill a Mockingbird," "Valley of the Dolls," "The Godfather," "The Exorcist," "Jaws," "The Dead Zone," "The Hunt for Red October," "The Firm," "The Bridges of Madison County" and "The Da Vinci Code." Though the list seems fairly diverse, Hall insists that they all share 12 common elements -- to such a degree, in fact, that they are all "permutations of one book, written again and again for each new generation of readers."

This is sorta true and sorta not, depending on what your needs are. It is indeed a fact that bestsellers often feature "fractured families," spiritual quests or doubts, "didactic" interludes that assure the reader he or she is learning something, "hot button" issues of the day and -- in my favorite of Hall's coinages -- a theme he dubs "Bumpkins vs. Slickers." But so do a lot of other books, from truly great novels to justly forgotten flops, American and otherwise. How helpful is it to point out "universal" traits of bestselling books if they turn out to be universal traits of most books? "Vanity Fair" is every bit as much a rags-to-riches story as "The Godfather," and nostalgic yearning for a lost pastoral idyll has been a major literary motif since Virgil's Eclogues.

Is it any surprise that popular characters ranging from Scarlett O'Hara to Michael Corleone tend to show "a high level of emotional intensity that results in gutsy and surprising deeds"? Or that readers prefer characters who "act decisively" rather than engaging in "navel gazing"? A successful plot, Hall explains, is one that quickly establishes a conflict or dilemma so that readers are "drawn forward by the momentum of the unfolding story as one complication after another challenges the central character and the original dramatic question mutates into another question and another."

Well, of course it does. Yet, in Hall's defense, I would point out that he is a creative writing teacher. For some reason, it is often the very people who say they want to write novels who seem to have the least understanding of what other people want to read. So Hall has no doubt seen countless examples of would-be authors -- including people determined to work in commercial genres -- who simply don't grasp the most elementary principles of storytelling. While "Hit Lit" may seem, to many readers, like the literary equivalent of instructions on how to boil water, the sad truth is that plenty of those who speak contemptuously of Dan Brown's prose are writers who could not get a child interested in a fairy tale.

True, I, too, would never call Brown a "good writer" -- yet many very successful novelists are not: Stieg Larsson, for example. A book doesn't have to be especially well-written, plausible or original to be a bestseller (although it can be). The characters don't have to be particularly interesting, as John Grisham proves again and again. In fact, if there is one trait that all of the bestsellers Hall considers absolutely share, it's that a lot of people like them.

That statement isn't as inanely tautological as it may sound. As Hall points out, the common belief that publishers deploy splashy, expensive promotional campaigns to snow the public into buying millions of copies of terrible books is quite mistaken; publishers do not have that kind of power. Hall quotes the fabled editor Michael Korda on the subject (and Korda, having launched Jacqueline Susann and Harold Robbins, ought to know): "At least half the books on any given week's bestseller list are there to the immense surprise and puzzlement of their publishers." Publishers can provide a book with the ideal conditions in which to catch on, but only the genuine enthusiasm of the reading public will make it an ongoing hit. Word of mouth -- one reader raving to another about how much he or she enjoyed it -- is the single determining factor. And you can't buy that.

So why does that public fall in love with some crappy books but not others? Hall makes one of his strongest points almost in passing: The bestsellers he considers are, he notes, "unique and creative mash-ups of traditional genres." "Unique" may be stretching it, but most of them do combine familiar elements in less familiar ways -- the recipe for successful genre fiction. "Gone With the Wind" transported the career-woman melodramas of its time into a historical romance. "The Godfather" is a family saga grafted onto a gangster story. The sensational historical-religious conspiracy theory at the center of "The Da Vinci Code" had already appeared in a nonfiction bestseller; Brown's brainstorm was to change the delivery mechanism to a fast-paced thriller.

And more often than you might think, luck and timing play a deciding role. Anyone in the romance-publishing industry will tell you that the current racy bestseller, E.L. James' "Fifty Shades of Grey," is fairly typical of the low-profile genre called erotic romance. Thousands of titles with more or less the same characters and themes -- many of them better-written and arguably more interesting than "Fifty Shades of Grey" -- were on the market long before James came along. But James emerged from the word-of-mouth factory that is Twilight fandom, and as a result her books introduced hundreds of thousands of readers to a genre they didn't know existed, much as Stephenie Meyers had introduced them to the vampire romance novel a few years before.

Still, the essential quality separating most tentpole bestsellers from the rest of the genre pack remains an enigma. Why did "The Help," among all the earnest, sentimental historical women's fiction published in the past 20 years or so, sell 10 million copies? It's easy, once the feat has been accomplished, to attribute a book's success to this or that feature, but picking winners beforehand is another trick entirely. The one predictive factor that readers (and therefore publishers) consistently rely on is brand loyalty; an author who has done it once, they assume, is likely to do it again. That's why the most consistent aspect of the bestseller lists is the reappearance of the same names, over and over.

Here's something else you can count on: A person who can't fathom why the public fell in love with Lisbeth Salander or Edward Cullen is probably not going to be able to write something they'll like just as much. Whiling away a couple of summer afternoons reading a trashy novel is a harmless way of wasting time. But writing a book even you wouldn't want to read? That's just killing it.