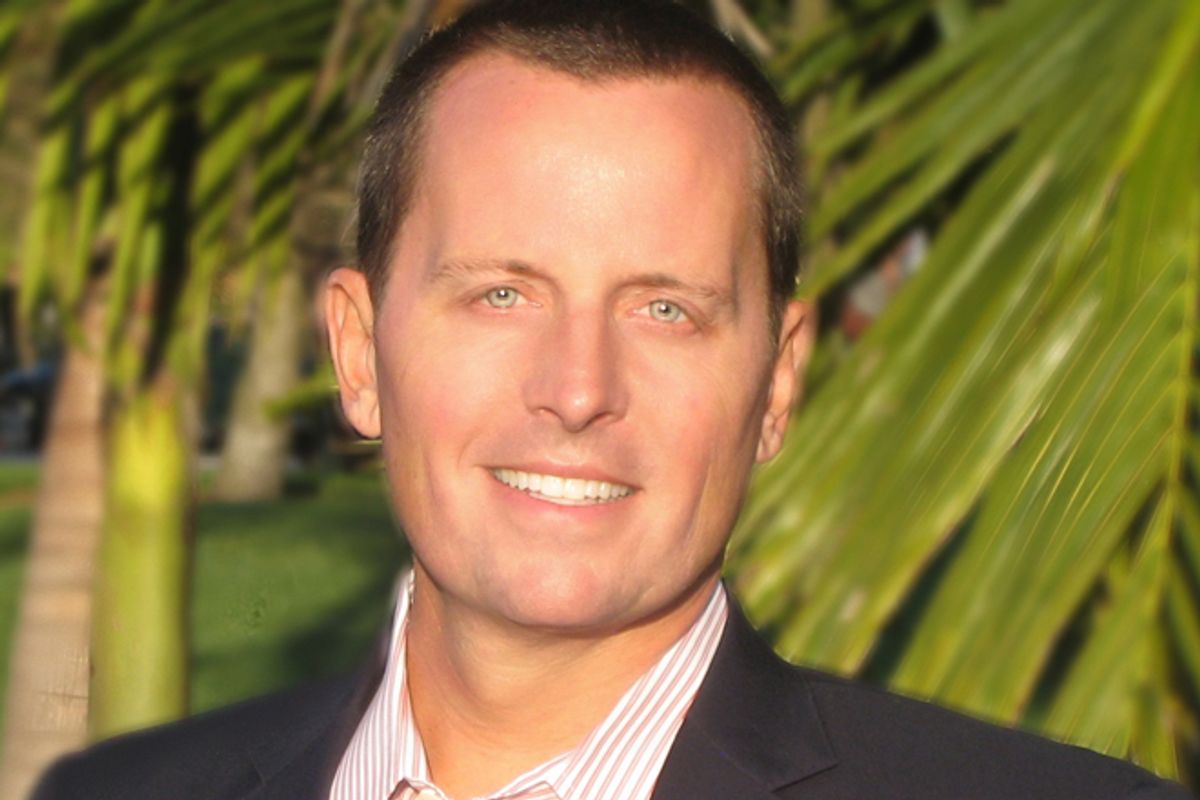 You may know Richard Grenell as the Romney "foreign policy spokesman" who had a history of writing dickish things -- mainly sexist "jokes" -- on Twitter. He has resigned, Jennifer Rubin reports, from the Romney campaign. Not because he didn't have the sense not to post his offensive jokes about Hillary Clinton and Rachel Maddow in a public venue to begin with, or because he then stupidly attempted to scrub his Twitter history after everyone had already seen the posts, but because he is gay, and that grossed out a bunch of creepy right-wingers.

Grenell, as I said, was a foreign policy spokesman, and so therefore the fact that he's openly gay would seem to have precisely nothing whatsoever to do with his job. He was not going to be advising Romney on domestic policy, let alone on social issues. But his icky gayness was too much for certain prominent conservative media figures, and Grenell was targeted by culture warrior religious right wackos like Bryan Fischer of the American Family Association. He was also the subject of some debate at the National Review Online. Kevin D. Williamson began it with a post that is hilarious in hindsight, in which he says that it's no big deal, at all, that the Romney campaign had hired an openly gay man. "I can only guess what anybody thinks the relevance of Mr. Grenell’s sex life is to the Romney team’s foreign-policy stance," he wrote.

Matthew J. Franck, "Director of the William E. and Carol G. Simon Center on Religion and the Constitution at the Witherspoon Institute in Princeton, New Jersey," quickly explained it for Williamson. The basic argument was, no, you don't get it, he's really, really gay.

I agree that Grenell’s being openly gay is, in itself, of no consequence for his service in the Romney campaign. Nor is the fact that he supports same-sex marriage — if, that is, we were assured that this view would have no influence on American foreign policy. But Grenell has made a particular crusade of the marriage issue, with a kind of unhinged devotion that suggests a man with questionable judgment. And when the Obama State Department is already moving to elevate the gay-rights agenda to a higher plane than religious freedom in the foreign policy of the United States, it is reasonable to wonder whether Grenell, after taking such a prominent place in the Romney campaign’s foreign-policy shop, would be in line for an influential State posting where he could pursue his passion for that same agenda.

Plus, Franck reports, Grenell wrote something for "the local gay paper" and he said something about gays winning support for "their political issues," which means he is part of the homosexualist agenda!

Williamson responded with some long-winded sarcasm mixed with a bit of crankery about how marriage has been debased by democracy, and Franck returned the volley with more ominous warnings about Grenell's scary gay gayness. "It seems pretty plain," Franck says, "that, whatever fine record he compiled in the Bush administration, Grenell is more passionate about same-sex marriage than anything else." It doesn't seem so, actually, but Franck goes on to imagine Grenell jumping ship for the Obama campaign regardless. Because you can't trust those homosexuals.

This bullshit led Grenell to resign, which fervent Romney supporter and non-gay-hater Jennifer Rubin is sad about.

I have decided to resign from the Romney campaign as the Foreign Policy and National Security Spokesman. While I welcomed the challenge to confront President Obama’s foreign policy failures and weak leadership on the world stage, my ability to speak clearly and forcefully on the issues has been greatly diminished by the hyper-partisan discussion of personal issues that sometimes comes from a presidential campaign. I want to thank Governor Romney for his belief in me and my abilities and his clear message to me that being openly gay was a non-issue for him and his team.

I'm really not sure how "clear" that message was, considering that they didn't actually push back against the crazies, at all.